Joe Biden has finally tested negative for COVID, seven days after suffering a rebound infection from the virus – but says he’ll continue to isolate for now.

He won’t leave isolation until he receives a second negative test, likely from a ‘gold-standard’ PCR swab.

O’Connor wrote: ‘The president continues to feel very well. Given his rebound positivity which we reported last Saturday, we have continued daily monitoring.

‘This morning, his SARS-CoV-2 antigen testing was negative.

‘In an abundance of caution, the President will continue his strict isolation measures pending a second negative test as previously described.’

O’Connor gave no indication as to when the second test result will become available, but said he would keep White House Press Secretary Karine Jean-Pierre up-to-date with any further developments. 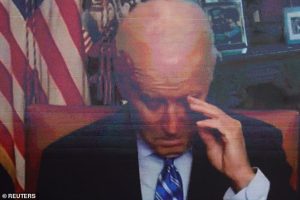 Biden first tested positive for COVID July 21. He took Paxlovid anti-viral treatment for the condition, and tested negative on July 27.

The president subsequently returned to work at the West Wing wearing a face mask.

But he suffered a rebound on July 30, with another positive test result.

The president spent a total of 13 days isolating in the White House – including seven during his most recent re-infection, before Saturday’s negative test.

He has continued to conduct official business and says his symptoms were mild.

Paxlovid – which is made by Pfizer – is feared to cause a COVID reinfection rate of up to 40 per cent among patients who take it.

Scientists say this is likely because it stops the body from forming its own natural response to a COVID infection, leaving a patient more vulnerable to a rapid re-infection after initially clearing the disease.

‘His cough has almost completely resolved,’ O’Connor noted in an update of the president’s condition.

Biden has been appearing at events this week via zoom, including on Wednesday when he joined the first meeting of the interagency Task Force on Reproductive Healthcare Access, which is headed by Vice President Kamala Harris, and, on Thursday, when he held a virtual event with business and labor leaders.

He also delivered an evening speech from the White House residence to announce a U.S. strike had taken out Al Qaeda leader Ayman al-Zawahiri.