I have heard many times that Ohh .. Hillary is so smart. Really!?

Lying about everything (sniper fire, no marked / sent / received emails, “NAFTA – Gold Standard” etc.), even on national live TV in front of 84 million viewers when, in these age of time, everything can be trailed down on the net and an army of internet pages, Youtube and bloggers are constantly fact-checking everything, how smart is that?

Being reckless about her emails when it is so easy to avoid, how smart is that?

All her relentless scandals, crimes and systematic abuse of people over the years, – she might not go to prison for all, or any of it, but planning, and wanting to be the president for all Americans, how smart is that?

And now this, irony alert:

Hillary may regret opening this can of “tax worms.”

Similar to the Ms. Universe “backfire” this tax “hit job” is flopping like a dead fish.

Firstly, the Clinton Foundation just FAILED a tax audit due to errors and evasion and has to refile 6 years worth of taxes.

Next, we recently discovered that the New York Times did not pay taxes in 2014.

AND NOW we’re finding out that Hillary used the SAME “tax scheme” (which is not a scheme, it’s perfectly legal) to pay less taxes in 2015.

Well this is a little awkward. With the leaked 1995 Trump tax returns ‘scandal’ focused on the billionaire’s yuuge “net operating loss” and how it might have ‘legally’ enabled him to pay no taxes for years, we now discover none other than Hillary Rodham Clinton utilized a $700,000 “loss” to avoid paying some taxes in 2015.

Trump "apparently got to avoid paying taxes for nearly two decades—while tens of millions of working families paid theirs." pic.twitter.com/g62jB9fKr5

And Hillary following up, adding Trump “apparently got to avoid paying taxes for nearly two decades—while tens of millions of working families paid theirs.”

However, a look back at Hillary Clinton’s tax returns from 2015 (here), proudly displayed by the campaign proving she has nothing to hide – shows something awkward on page 17…

While not on the scale of Trump’s business “operating loss”, Hillary Clinton – like many ‘wealthy’ individuals is taking advantage of a legal scheme to use historical losses to avoid paying current taxes.

As Bloomberg notes, this federal tax break is among the wealthy’s most used avoidance schemes…

Those 1.1 million folks in the 1 percent, as measured by the TPC, have annual income that averages a little less than $700,000. The top one-tenth of that group, some 110,000 households, average about $3.6 million, according to Howard Gleckman, a senior fellow at the TPC.2

Among the biggest of these givebacks, courtesy of the Internal Revenue Service (well, really Congress), are capital gains and dividends—these are the biggest way the wealthiest benefit.

Finally, as we noted previously, the NYT itself is also perfectly happy to take advantage of the US tax to minimize the amount of money it pays to the government: in 2014 the company got a tax refund of $3.6 million despite having a $29.9 million pretax profit, an effective negative tax rate for 2014, which it explained was favorably affected by approximately $21.1 million for the reversal of reserves for uncertain tax positions due to the lapse of applicable statutes of limitations.

Shallow stupidity is the creed of the Democrats of today, and the more they don’t know or understand, louder and more brush they are .. Power through, as she say, regardless of facts.

“DONALD TRUMP’S FOREIGN POLICY IS ALREADY MAKING AMERICANS LESS SAFE, AND HE’S NOT EVEN PRESIDENT (YET).” 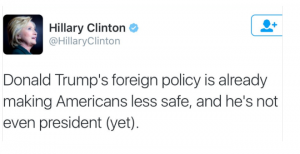 The keyword there is “YET.” See, even Hillary Clinton knows that Donald Trump will be the 45th President of the United States. And how could she not? The people love Donald Trump because he is a step away from the kind of BS politicians we have gotten too used to, exactly like Hillary Clinton.

The really amazing thing here is that a political machine like Hillary, who has an army of advisors and specialists dictating her every move, would still be capable of Tweeting something this stupid without ANYONE catching it.

Clearly, even Hillary Clinton staffers do not ACTUALLY want her as president.

Oh, and Trump’s foreign policy is lightyears ahead of Clinton’s. He wants to promote better, more beneficial trade agreements and strengthen us abroad.

SHARE BELLOW if you want to get Trump’s message out!

Evidently, she is the most unqualified, dishonest, corrupt and the stupidest person EVER seeking the highest office in the world!

Update: HILLARY CLINTON ASKS IF DRONE CAN BE USED IN ASSASSINATION OF JULIAN ASSANGE: “Can’t we just drone this guy?”