As the latest climate summit gets ready to start, China and India are first out of the traps with the ransom demands: 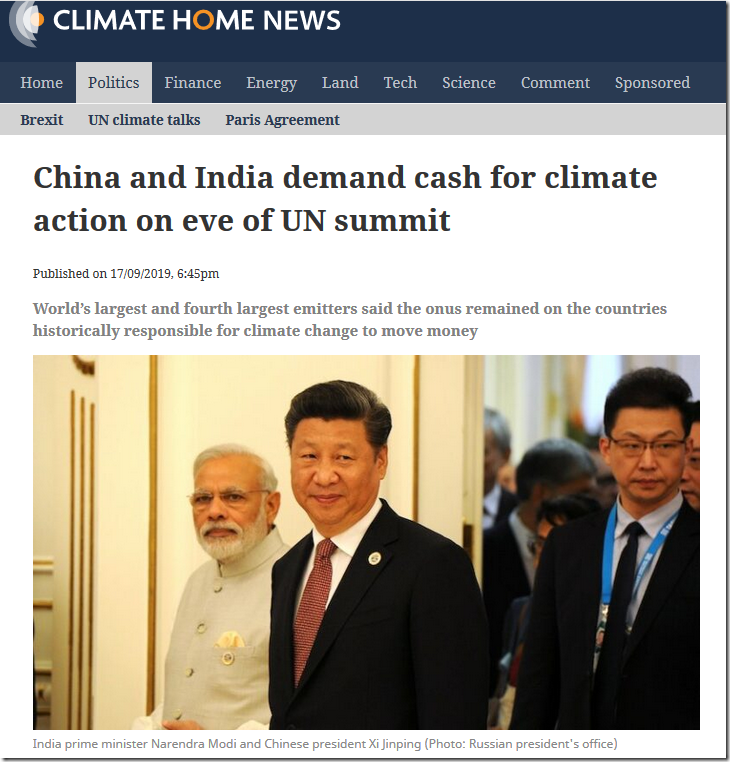 China and India demanded rich countries provide financial support for them to increase their climate plans, as leaders prepared to meet at a UN summit in New York.

The summit has been personally convened by UN secretary general António Guterres as a moment for political leaders to show their willingness to increase their climate plans and deepen the decarbonisation of their economies.

Guterres asked governments to come ready to announce the plans they will set next year.

But in separate statements published on Tuesday, the world’s first and fourth largest emitters put the onus on rich countries to fulfil their commitments to mobilise $100 billion per year by 2020 for developing countries to cope with the impacts of climate change.

As the largest developing country, China “also enjoys the right to receive funds”, it in a statement published by the ministry of ecology and environment.

It said developed countries should “implement and strengthen” and “honour the commitment” to “support the developing world in addressing climate change”.

In its statement, India’s ministry of finance said its plan was set on a “best effort” basis and that “finance holds a key for all its actions”.

With uncertain finance and technology provision, “India can only aspire to implement the already promised climate actions”, the statement said. It added that India “may only be in a position to elaborate or clarify its post 2020 climate” plan at the summit.

Instead, India said will be “better placed” to “suitably recalibrate [its climate plan] through re-examination and improvement,” in 2023, when the next global stocktake to ramp up ambition is due to take place.

Meanwhile the FT report that leading coal supporting nations will be blocked from speaking:

Leading economies such as Japan and Australia will not be invited to speak at next week’s crunch UN climate change summit, as their continued support for coal clashes with the demands of the organisation’s secretary-general as he sounds the alarm on climate change.

Coal has emerged as a key issue ahead of Monday’s meeting in New York, where 63 countries are expected to speak, according to a draft schedule seen by the Financial Times.

In letters and conversations with heads of state, António Guterres, UN secretary-general, has demanded that countries attending the summit stop building new coal power stations, reduce fossil fuel subsidies, and commit to net zero emissions by 2050 — demands that have not gone down well in all quarters.

Dozens of heads of state including the UK’s Boris Johnson and France’s Emmanuel Macron will deliver new climate pledges in a series of three-minute speeches, in what has been billed as a major show of global climate commitment.

However the summit is notable for those that will not appear: a number of countries building new coal power stations such as Japan, South Korea and South Africa will not take the stage. Also excluded will be the US, which has said it intends to withdraw from the Paris climate agreement, as well as Brazil and Saudi Arabia, which have criticised the climate pact.

No speaky, no money, I would suggest!!

Not that bribing India will make much difference. India’s Business Standard report that India’s energy demand will double by 2040: 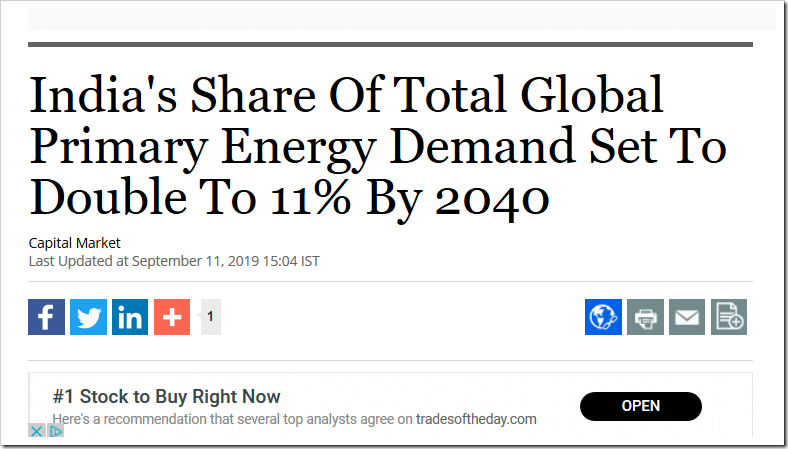 Union Minister of Petroleum and Natural Gas & Steel Dharmendra Pradhan said that the inevitable shift in global energy consumption to Asia is a reality. Pradhan also noted that India has to improve availability of energy to over 1.3 billion people, whose per capita energy consumption is lower than the global average. Now, India is the third-largest energy consumer in the world, and its energy demand is growing faster than all major economies of the world. India’s share of total global primary energy demand is set to double to 11% by 2040.

Addressing the opening session of the 8th Asian Ministerial Energy Roundtable in Abu Dhabi today, he said that we now need to ensure that this change is rooted in Energy Justice, which was articulated by Prime Minister of India Narendra Modi as most important component of Energy Vision of India. Pradhan said that the Emerging Asia will be driving the world economic growth in the coming 20 years. In the global context, developing economies will drive 80% of the incremental global growth, with India and China accounting for more than half of it.

He noted that energy access, higher standard of living and improved prosperity in developing countries will primarily drive the energy demand. It is important for the low income, low per capital energy consuming countries to have access to technology and capital when it comes to energy efficiency and cleantech. That will provide better energy security than short term interventions in fossil fuel supply and price.

He said that due to poor and imbalanced energy infrastructure, 400 million people in Asian region have no access to electricity, and rural residents have no access to clean electricity. Therefore, providing safe, stable, affordable and efficient energy has become an important task for governments of all countries.

Given that global energy consumption will rise significantly by then, doubling India’s share will mean their absolute demand will more than double.

Renewable energy will make little more than a dent in that, regardless of how much money is thrown at it.

I do find it ironic though. We are continually told that wind and solar power are now the cheapest form of new generation, yet India and China are demanding hundreds of billions to switch to renewable power. If it really was so cheap, they would be doing that anyway.

Australia blocked from speaking at UN

Australia has been banned from addressing a global climate change summit after the government refused to contribute more money to a green climate fund.