Climate change is real, the climate changes — this fact is never disputed. A new study, led by prominent Chinese scientists, has found that winters in northern China have been warming for the past 6,000 years –unrelated to human activity– but now the prospect of a sudden and severe bout of global cooling is on the horizon and poses a serious danger.

The paper, which has been accepted for publication by the online Journal of Geophysical Research, found that winds from Arctic Siberia have been growing weaker for thousands of years, the conifer tree line has been retreating north, and there has been a steady rise in biodiversity in a general warming trend that continues today. And that’s another thing AGW alarmists fail to address — increasing temperatures ALWAYS result in increased biodiversity. Life loves warmth, and, furthermore, it loves carbon.

This weakening of the Siberian wind, according to the researchers, appears to have nothing to do with the increase in greenhouse gases which began with the industrial revolution. Lead scientist Dr Wu Jing, from the Chinese Academy of Sciences, said the study had found no evidence of human influence on northern China’s warming winters.

“Driving forces include the sun, the atmosphere, and its interaction with the ocean,” Wu explained. “We have detected no evidence of human influence. But that doesn’t mean we can just relax and do nothing.”

Wu and her colleagues are worried that, as societies become further indoctrinated by the concept of global warming, people will develop a misplaced confidence in our ability to control the climate — which we cannot. Nature, they warned, will likely trick us and catch us totally unprepared — potentially causing chaos, panic, famine and even wars. 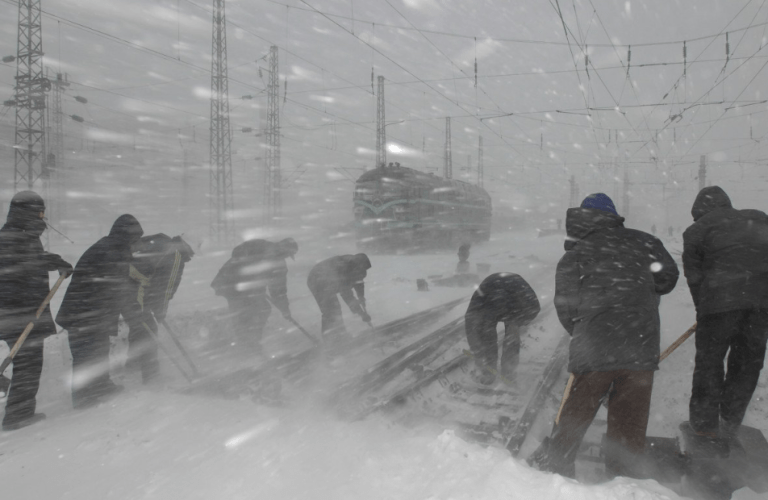 Rail-workers braving the cold in central China in 2008 (during solar minimum of very weak solar cycle 24), when the nation was hit by devastating winter storms. Photo: Xinhua

There are already concerning signs, according to their paper.

Wu and her colleagues have found that winter warming over the past 6,000 years has been anything but linear, with violent ups and downs occurring roughly every 500 years.

After more than 13 years of dedicated research across volcanic lakes in the wilderness of the Greater Khingan Mountain Range in Inner Mongolia, the scientists collected and crunched climate data spanning as far back as 10,000 years.

And their findings confirmed an earlier study by a separate team of Chinese scientists, published in 2014, which first detected the 500-year cyclical pattern of China’s summer monsoons and linked it to solar activity.

The 2014 paper, which drew on 5,000 years’ worth of proxy data, suggested the current warm phase would end within the next several decades, ushering in a brutal 250-year cooling phase.

Wu said her latest study not only helped to flesh-out the 500-year cycle, but also revealed a previously unknown mechanism behind the phenomenon, which suggested the impact of the sun on the Earth’s climate is much greater than previously thought:

According to Wu, the variation in solar activity alone was not normally strong enough to induce the rapid changes in vegetation the research team observed within the sediment cores of the volcanic lakes. Instead, the scientists found the warming impact was amplified by a massive interaction between surface seawater and the atmosphere in the Pacific Ocean known as the ‘El Nino-Southern Oscillation’.

As a result of the research findings, Wu said she was now much more worried about global cooling than global warming.

“A sharp drop in temperature will benefit nobody,” she said.

“The biggest problem is that we know it will come, but we don’t know exactly when.”

The cold times are returning, in line with historically low solar activity — a growing number of scientists from all corners of the world are coming out with this warning.

Even stuffy NASA agrees, in part at least, with their SC25 forecast revealing it will be “the weakest [solar cycle] of the past 200 years” (www.nasa.gov):

People need to prepare for the cold, though unfortunately the message stuck on loop across the MSM is one of impending catastrophic warmth, which is illogical and misguided at best.

“A sharp drop of temperature will benefit nobody.”

And unfortunately we don’t have long.

China’s Scientists Publicly Say We Are Headed Into Global Cooling

Chinese scientists now confirm that our world is entering a “Global Cooling” phase, which explains why the economy, and tension in the air seem to be ramping up. China and USA are the two largest corn producers on the planet and are both struggling with record low planting this year. The Grand Solar Minimum is now being drip fed to the public. Who is paying attention to China’s string of pearls?

Climate Revolution is a ‘Must Read’ for understanding our Sun driven climate as we progress deeper into the new Eddy Grand Solar Minimum. Weather extremes leading to Global food scarcity and high food prices are here now, and this book describes the expected changes, how to survive & thrive during future challenging times with practical preparations. Video: Adapt 2030