Green outrage is growing that Congress tweeted a link to an article by James Delingpole, which details how global average land temperature has just crashed by 1C (1.8F).

Bernie Sanders sent a curt response to a climate change denying tweet from the House of Representatives Science Committee on Thursday.

The initial tweet, sent from an official government account, sends a clear message about how environmental policy will shift under a Republican Congress and a Donald Trump presidential administration.

It links to a climate change denying Breitbart News story that cited a misleading report in the UK tabloid the Daily Mail. The Daily Mail report claims, “Nasa featured a new study which said there was a hiatus in global warming before the recent El Niño.”

Here’s how the Vermon senator responded.

Why are climate advocates so upset? The reason is they were expecting global temperatures to keep shooting up. Consider the following statement from Michael Mann, back in March.

Why is 2016 smashing heat records?

… according to Professor Michael Mann, the director of Penn State Earth System Science Centre. He said it was possible to look back over the temperature records and assess the impact of an El Niño on global temperatures.

“A number of folks have done this,” he said, “and come to the conclusion it was responsible for less than 0.1C of the anomalous warmth. In other words, we would have set an all-time global temperature record [in 2015] even without any help from El Niño.”

As WUWT recently reported, James Delingpole’s claim is correct – the plunge in land temperatures over the last 6 months is the fastest drop on record. 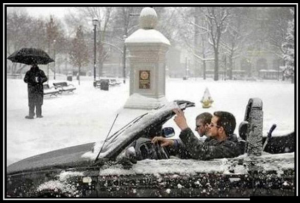