Media Matters outraged: Skeptics “[Marc] Morano and [Dr. Patrick] Moore also got more time at the hearing than the four scientists invited by the Democrats, according to Public Citizen.”

“Morano and Moore made a mockery of the House hearing, and that’s exactly what Republicans wanted.”

Warmists demand to know: “How did these two dominate a hearing run by Democrats?”

“Fox News has helped to put Morano and Moore in the public eye by giving them a platform to sow doubt about climate change and other serious environmental issues, and now the two men’s latest Fox-worthy rants are part of the congressional record.”

Greenpeace co-founder blasts UN species report: ‘That is not science. That is fiction. Fairy tale stories’

Climate Skeptic Steve Milloy Cheers: “Thanks for having a hearing that allowed climate skeptics, Patrick Moore and Marc Morano, to totally outclass your climate bedwetters. Now you know why bedwetters generally avoid sharing a stage with skeptics.” 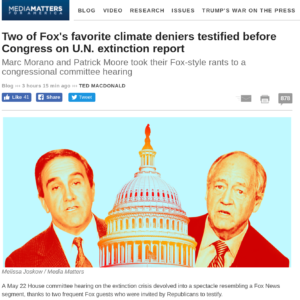 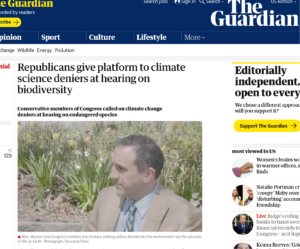