President Trump has now been in office for seven complete months and it appears that the results of his actions as President are very good.  We decided to compare his results with those of former President Obama to gain a perspective on how he is really doing. 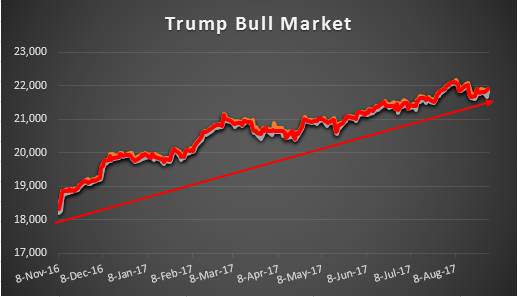 * President Trump is already the only President in US history to oversee two stock market rallies of nine days or more where the markets set new highs each and every day.

* The DOW increased by 4,000 points in the 200 trading days between November 4th and August 22nd.  This was the only time in US history where the DOW rose more than 4,000 points over a 200 working day period.

* The S&P 500 and the NASDAQ have both set new all-time highs during this period.
* The US Stock Market gained $4 trillion in wealth since Trump was elected!
* The S&P 500 also broke $20 Trillion for the first time in its history. 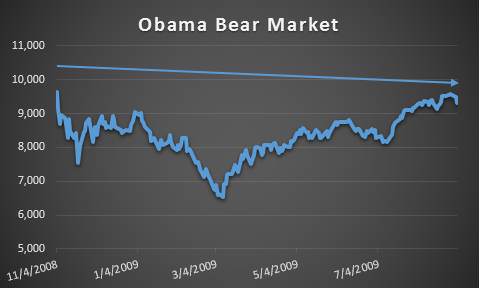 By September 1st 2009 the DOW was back to above 9,000 at 9,310 but still below the November 4th stock market average.  During this time period the stock market never reached a new stock market high.  As a matter of fact, the Obama markets didn’t reach a new all time high during Obama’s entire first term (4 years).

As of today, President Trump decreased the US Debt since his inauguration by (-$103) Billion.

President Trump now can claim the longest and largest decrease of US Federal Debt in history.

No President besides President Donald Trump has cut the amount of US Debt by $100 Billion ever.

President Obama on the other hand increased the US debt in his first seven months by more than a $1 Trillion.

Obama increased the US debt in his first 7 months by $1,166 billion or more than President Trump by $1.3 trillion dollars!

President Obama was so bad at creating jobs that by the end of his second term he said that jobs were not coming back.

Also according to the Bureau of Labor Statistics President Trump decreased unemployment since his inauguration (January through August 2017).  The unemployment rate in January 2017 was 4.8% and by August it was down to 4.4%.  It has never been higher than the starting rate of 4.8%.

President Obama on the other hand again moved in the opposite and negative direction. In his first eight months as President the US unemployment rate increased nearly each month from 7.8% in January 2009 to 9.6% by August of 2009.

Housing sales are red-hot in the US right now. In 2011, houses for sale were on the market an average 84 days. This year, it’s just 45 days.

According to the US Census Bureau, there were nearly twice as many US housing sales in the past couple of months as there were under President Obama in 2009 during the same time period. (The annualized housing sales rate for July 2017 is reported at 571,000 where in 2009 this amount was only 411,000.)

Under President Trump the second quarter annual GDP growth rate nearly doubled the rate from the President’s first quarter.  Also, according the BEA, the US GDP surpassed $19 Trillion for the first time in US history under President Trump.

President Obama is the only President not to reach a 3% GDP Growth rateduring his Presidency.

The US Manufacturing Index soared to a 33 year high in February 2017 shortly after President Trump was sworn into office. The index reached 43 in February which was the best outlook since 1983 under President Reagan and has been in double digits ever since.

In Obama’s first five months in office (January through August of 2009) the best manufacturing index activity rating was 8 in August 2009 with most months being negative double digits.

No Fed Funds Rate increases took place between June 2006 and December 2015. CNBC reported in December 2015 that President Obama oversaw “seven years of the most accommodative monetary policy in U.S. history” (from the Fed). But still the Obama economy due to numerous job killing initiatives pales when compared to President Trump’s.

Illegal immigration is down 67% since President Trump’s Inauguration. Illegal border crossings are down 93%.  President Obama opened up the US borders and Trump has drastically shut down illegal immigration. The result of this is lower costs for the federal government and taxpayers.

Americans are expected to enjoy their summer vacations more due to low gas prices. The USA Today reported that:

American drivers are poised to reap unexpected savings at the gas pump after oil prices kicked into reverse.

The low gas prices that benefit Americans are due in part to President Trump’s actions to allow drilling in the US, reducing the amount of foreign oil imported from Middle East nations. Under President Obama gas prices in the US reached nearly $4 a gallon.

One of the first things that President Trump did in office was to reduce the number or burdensome regulations put in place during the Obama era. In January President Trump signed his 2 for 1 executive order mandating that for every new regulation, two regulations needed to be revoked. Even far left Politico notes that significant federal regulations since Trump’s inauguration have slowed to an almost total halt.

Overall based on the above data it is clear that President Trump is doing a solid, if not excellent job.

The mainstream liberal media won’t report this, but when looking at the economy, President Trump the billionaire businessman crushes the former community organizer Barack Obama in every meaningful measurement.  President Trump is enjoying massive success while the severely unqualified and nearly incompetent President Obama forced America through some of its worst years in history.