Media Research Center (MRC) and Media Equalizer are leading the conservative campaigns against Maddow, as well as other mainstream media programs.

The proposed boycott comes after Hannity lost advertisers after pushing a conspiracy theory about the murder of a Democratic National Committee staffer.

In a statement Wednesday, MRC founder Brent Bozell tweeted that his group is monitoring news shows and will put “media’s advertisers on notice” if they perceive attempts at a liberal “smear” campaign.

“The radical left’s efforts to silence conservative media by targeting their advertisers in therewith coordinated smear campaigns has gone unanswered, and today is the day the conservative movement fights back,” Bozell wrote in a statement.

“Every network and cable news channel is today on notice that the MRC will be closely monitoring their leftist opinion programs and informing their advertisers and the American public when these programs and hosts go beyond political commentary and engage in smear, hate and political extremism,” he added.

See my statement on a new campaign informing the public & corporate advertisers about leftist shows/on-air personalities who promote lies. pic.twitter.com/DgLcAIUo9q

Hannity retweeted a Media Equalizer article Tuesday that called for support of the talk show host after his advertisers began pulling ads from his show, urging viewers to fight back by contacting MSNBC advertisers.

“To counteract these fascistic tactics, #StoptheScalpings has decided to fight fire with fire. As long as Media Matters continues to attack conservatives, we will return them the same kindness,” the Media Equalizer story reads, referencing the liberal media group Media Matters.

“We begin with Rachel Maddow who has been the biggest purveyor of lies and propaganda in the media today. Like Media Matters, we will now inform the public and the advertisers about who they are financing,” it adds.

Hannity lost over half a dozen advertisers shortly after the list was published.

Media Equalizer, a conservative blog, borrowed Media Matters’s strategy and posted a list Tuesday of Maddow’s advertisers, along with their contact information. 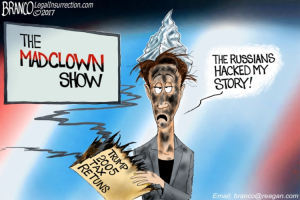 Hannity about the Nazi-left’s endless stream of fake news and how Media Equalizer is fighting back ..