The culture of Cambodia is one so interesting that individuals from the world over travel to the Kingdom’s shores for a taste of it all. From the temples, to the historical sites, to the soft smiles on the faces of young monks, there is just so much to see, feel, and experience here in Cambodia. 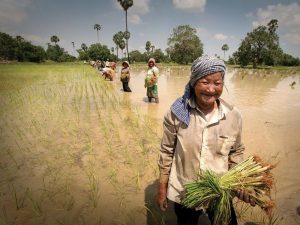 Ancestors of the Khmer people are thought to have arrived in the Angkor area between 5 and 10 thousand years ago. Good fishing opportunities lead them to the shores of Tonle Sap Lake. The first contact between the Khmers and the Indians is thought to have happened around A.D. 100 while traders were looking for a maritime route through to China for trading purposes. Since then, the introduction of Buddhism, and the adaption of the animistic Khmer culture to it has led to what the culture is today – a fantastically spiritual, and rare way of being in the world.

The main values in Cambodia

Cambodia is a land that is, in some ways, massively different from the ways of the Western world, and in other ways, exactly the same. Family, religion and various traditions are important in both cultures. However, the exemplification of these values is so very different from the traditions and practices of each of the disparate worlds.

Family, and service to that family, is of great importance in the culture. Interestingly, commitments to the surrounding community, and any ties to members outside of the family are also taken very seriously. So seriously in fact, that these responsibilities are on par with one’s commitments to their own family.

Cambodia, is by and large, a rural society. Without the time-bounded endless demands that we have become so accustomed to in the Western world, Cambodians’ relationship with time has taken on a very different form. Rather than being so time-focused, people are more event-focused. This means that rather than taking your cue for lunch from the time on your watch, lunch will happen in accordance with the proceedings of the day. Sometimes it will be earlier, sometimes it will be later. Things happen more intuitively and organically, simply because there is no need to schedule them.

People in Cambodia place great value on interpersonal relationships. One’s relationships with others dictate their prioritization of time – which is just such an interesting concept! Rather than our loyalties and priorities lying within ourselves and our needs, the needs of others, and one’s relationship with them, supersedes the importance of the self.

Cambodians also live their life with a certain sense of reduced accountability and a rather fatalistic outlook. The power of the self to intervene in the course of life’s events, or to enhance one’s prospects, is significantly diminished. Individuals are often resigned to whatever lot they face, making peace with what is. While this is a difficult pill to swallow from the standpoint of countries that thrive on entrepreneurship and ambition, whose to say which standpoint is more productive to your well-being?

Traditional roles of men and women 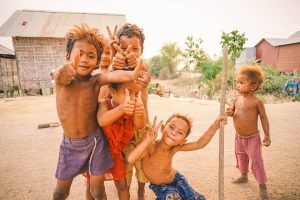 The structure of the nuclear family unit in Cambodia was incontrovertibly altered as a consequence of the horrific Khmer Rouge. Millions of family members were lost in this time, which has left a staggering amount of families without two parents, and without sufficient adult company to run the affairs of the household.

Because so many families lost members in the Khmer Rouge era a household can consist of a wide range relative combinations. Single-parent families led by a widow are relatively common. Member of a household commonly share work, food and resources.

Legally, the husband is the head of the Khmer family. As was the hard rule in days gone by in the Western world, the husband is responsible for providing shelter and food for the family unit – not an easy responsibility to have on your shoulders! Husbands/men are also responsible for physically demanding tasks, like ploughing and harrowing the rice paddies, threshing rice, and caring for cattle. They are also expected to take care of the carpentry needs. Again, not easy. At least they’re not expected to deal with IT problems, a failing WiFi connection, and the issues associated with a teenage girl running free in a shopping mall.

There is a distinct double standard, and undeniable level of sexism within the country – especially within more rural parts of the land. Men are usually significantly more educated, with at least 10 years of instruction behind them. Females, on the other hand, are drastically under-educated with as little as 16 percent of girls in the country enrolled in school. While wages may be insufficient nation-wide, it is true that as little as 6 percent of females actually get paid for their work.

As such, the role of the wife/woman rarely stretches beyond the confines of the household. Because of the atrocities of the Khmer Rouge, thousands of women have been forced to be exceptionally strong in Cambodia, taking responsibility for things that would usually be shared by a household with more than parent. Women often perform the same sort of labour intensive activities that men do. Above and beyond washing and caring for the house, women will do work in the fields, produce other goods, and involve themselves in trade and exchanges.

The ability of single mothers to do it all is nothing short of a miracle, and is testament to the strength of human character. Women are also the spiritual heads of the household. They guide and educate children around religion and ethics and steer them toward the light.