The hubris of the Australian Bureau of Meteorology is on full display with its most recent remodelling of the historic temperature record for Darwin. The Bureau has further dramatically increased the rate of global warming at Darwin by further artificially lowering historic temperatures.

This begins by shortening the historical temperature record so that it begins just after the very hot years of the Federation drought. Then by changing the daily values: that is changing the observed measured temperatures to something else.

For example, on 1st January 1910 the maximum temperature recorded at the Darwin post office was 34.2 degrees Celsius.

A few years ago, the Bureau changed this to 33.8 degrees Celsius, cooling the recorded temperature by 0.4 degrees. In its most recent re-revision of Darwin’s climate history the temperature on this day has been further reduced, and is now just 32.8.

Environmental reporter for the Australian newspaper, Graham Lloyd, asked the Bureau why it had made such changes earlier in the week. A spokesperson is quoted in The Weekend Australian as follows:

“In other words, the adjustments estimate what historical temperatures would look like if they were recorded with today’s equipment at the current site.”

Yet this is a version of exactly the same reason given by the Bureau just six years ago for reducing the temperature on 1 January 1910 by ‘only’ 0.4 degrees.

Neither the equipment, nor the site has changed since ACORN-SAT Version 1 was published in 2012.

Yet another 1 degree has been shaven from the historical temperature record!

So, why was the temperature dropped down by a further one degree for 1 January 1910 in the most recent revision – undertaken just a few months ago? There is no logical or reasonable explanation.

When the daily values are added-up, and compared between versions as annual mean maximum temperatures we see the magnitude of the change – and its effect on temperature trends. 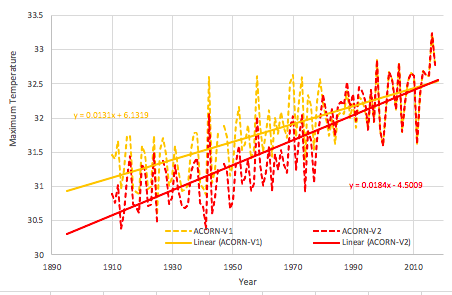 The extent of global warming increases from 1.3 degrees Celsius per 100 years to 1.8 degrees Celsius in the latest revisions by the Bureau to Australia’s temperature history.

In the maximum temperature record as actually measured at Darwin from 1895 to the present — and taking into consideration the move from the airport to the post office –- there is no warming trend in the Darwin temperature record. This is consistent with other locations in northern Australia with long high-quality records, for example Richmond in north western Queensland. 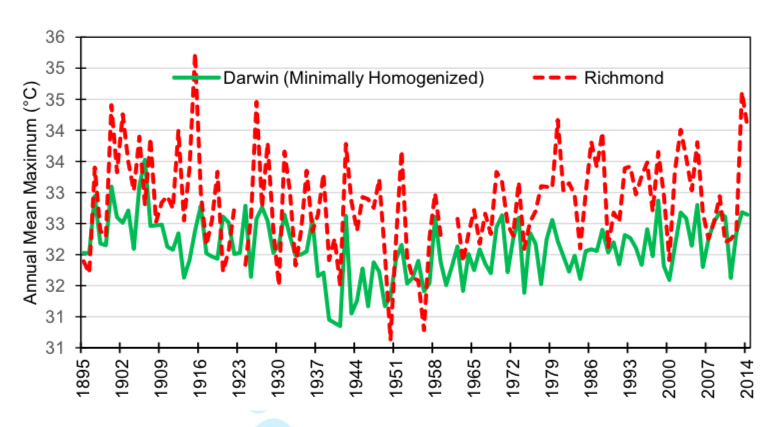 Annual mean maximum temperatures as measured at Richmond, Qld, charted with a minimally homogenized series for Darwin that combines the post office and airport series into one continuous temperature series making adjustments only for the move to the airport. 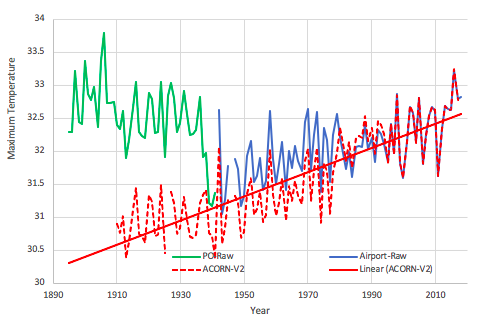 Mean maximum annual temperatures as measured at the Darwin Post Office and airport shown with the new remodeled ACORN-SAT Version 2, which is the new official record for Australia.

What the Bureau has done to the historical temperature record for Darwin is indefensible. The Bureau has artificially shortened and cooled Darwin’s climate history to make it consistent with the theory of human-caused global warming.

Willis Eschenbach has covered the issues with the Darwin climate station in the past here and here at WUWT. Worth a read.