The culture of Sri Lanka is known for its ethnic variety and blend of modern and traditional features. Sri Lankan culture has long been impacted by the tradition of Theravada Buddhism that was transmitted from India; this influence is especially notable in the country’s center and southern areas.

Sinhala (also called Sinhalese or Singhalese) is the mother tongue of the Sinhalese ethnic group which is the largest in Sri Lanka. It belongs to the Indo-Aryan branch of the Indo-European languages.

In Sri Lanka, around 16 million people speak Sinhala, of which 13 million are native speakers.
Along with Tamil, it is one of Sri Lanka’s officially recognized official languages.
The Tamil people of Sri Lanka speak Tamil, the oldest of the Dravidian language family and a classical language.

Tamils in Malaysia, Singapore, and India also speak it. With more than 74 million speakers worldwide in 1996, it was the eighteenth most widely used language.

The two primary religions in Sri Lanka are Buddhism and Hinduism, both of which have a significant impact on the country’s politics, culture, and social life.
Generally speaking, Buddhists hold that everyone has multiple reincarnations.
They should make an effort to improve their behavior in each life until they reach
what is referred to as “Nirvana.”
Five vows are made by Buddhists: 1. not to kill or cause harm to any living thing. 2. Never steal or take anything that is not offered to you voluntarily. 3. to restrain a sexual urge. 4. not telling lies. 5. not to use drugs or consume alcoholic beverages.
Samsara, or the idea that one’s deeds in this life affect one’s standing in the afterlife, and “dharma,” are two of Hinduism’s core doctrines.

Hinduism contains a variety of gods, including Ganesh, Shiva, Vishnu, Parvatand Kali, who are all manifestations of Brahman (the eternal source of everything).
Both a direct and an indirect effect of religion on business. The widespread belief that a greater power is in charge, or fatalism, is what predominates.
People will therefore consult religion when making decisions, etc. 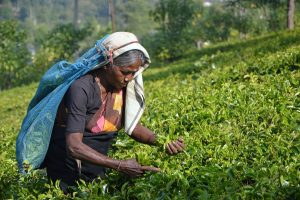 Tea was and still is of major importance to the Sri Lankan economy. Photo taken in Talawakelle by Asantha Abeysooriya on Unsplash

Etiquette and Manners in Sri Lanka