I have been using Facebook for a few years, have been discussing all kind of stuff in different groups during that time, not a problem .. NOT ONE!

Until yesterday when i came across a low IQ – criminal muslim in a discussion about radical islamic terrorists.

Norway is, as most knows, located in the northern part of Europe and “refugees” knocking on our doors have to be crossing a lot of borders to get here, that is fairly logic when they come from the Middle East.

Now, the laws are such, if you are a refuge, you are required – again BY LAW! – to seek refugee status in the FIRST country in the SCHENGEN zone you arrive at. It’s not possible that that can be Norway, i.e. those coming to Norway has broken the laws, in short, they are criminals.

Of course the embolden, entitled low-life, sand-negro got very upset with me pointing out the obvious and reported me to Facebook, which then had my profile restricted.

I do not care about being blocked by Facebook, that is not the point of this story. The point is to show how the politically correct left are letting themselves be used by criminal muslims to silence criticism – legitimate criticism.

The picture grown people in a closed group on Facebook are not allowed to see. 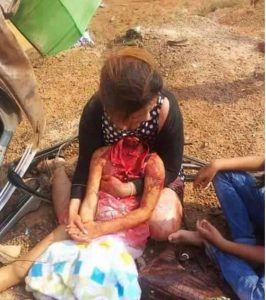 There was also a video posted by another user, a video of a small dog soaked with gasoline by criminal muslims and then light on fire, he also faced restrictions.