The pressures of raising a family are shared more equally between spouses thanks to gender neutral parental leave, which helps even out the gender pay gap in the business and help retain more mid-level talent.

Parental leave is a significant roadblock to career advancement for female talent, even though juggling work and caring obligations remains challenging for everyone.

Compared to 3% of men with children, 56% of women with children said that maternity leave had significantly hampered their career advancement, according to the Advertising Council of Australia’s (ACA) Create Space census statistics.

RELATED: The parents raising their children without gender Some parents are championing ‘gender-creative’ parenting styles, which are designed to let children pick their own identities later in life.

Furthermore, 1 in 4 female middle managers in Australian advertising are likely to quit their jobs as a result of a lack of inclusion, despite the fact that the business is dominated by women.

Hannah Sturrock, national head of engagement at Advertising Council Australia, stated at the first of ACA’s Create Space Webinars: “There is evidence of a retention difficulty for females.”

“In junior roles we start with almost 70% female employees, but this drops to 46% at executive management level,” she said. 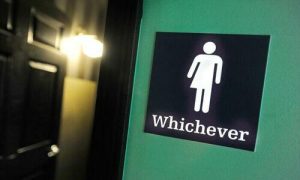 A gender neutral sign is posted outside a bathroom at Oval park Grill on May 11, 2016 in Durham, North Carolina. The debate over transgenderism is spreading nationwide, particularly when it comes to transition surgery for young people

“A popular misconception is that female representation at senior levels will simply catch up in time. However, gender disparity will not be a self correcting process, mid-level women will not gradually progress to senior roles without us doing anything.

“This is because female talent has the highest risk of leaving the industry altogether.

“We may be employing more women, but we’re less successful in recruiting and retaining women all the way to the top.”

Parental leave was the main factor, according to Sturrock, when examining the cultural factors that might be limiting women from moving up to senior positions. 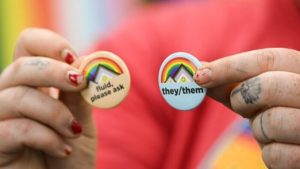 Laramie LGBTQ residen and University of Wyoming Alumni Ray Kasckow holds pins about gender pronouns, on the University of Wyoming campus in Laramie, Wyoming, on August 13, 2022. – Nearly 25 years ago, the brutal murder of Matthew Shepard — a gay college student in Wyoming who was beaten, tied to a fence and left to die — shocked America. Today, the small city of Laramie — the scene of the infamous hate crime — has become an improbable refuge for sexual minorities in the ultra-conservative mountain state. (Photo by Patrick T. FALLON / AFP) (Photo by PATRICK T. FALLON/AFP via Getty Images)

“This key milestone in many women’s career journeys is essentially retarding their promotion and pay. This is a key issue our industry needs to address if we’re to make an impact both on the representation of women at senior levels and that feeling of inclusion.

“We’re seeing that a large proportion of women in mid-career are likely to leave our industry due to a lack of inclusion. And that’s in comparison to 1 in 10 middle career males.

“So we’re asking the industry to work towards gender neutral parental leave policies as well as integrating return to work support.” “For employers, it’s not only important to design gender neutral paid parental leave policies, that removes primary and secondary care labels to encourage men to take the leave as well, but extending leave from 12 to 24 months and making it as flexible as we can.

RELATED: ‘It’s all about democracy’: inside gender neutral schools in Sweden “Moreover, we know that once women and men return to work, we need to support them as an organisation with non-leave measures such as external services, coaching, but mainly enabling flexible work to help them balance their new work and private life.”

Other sorts of return to work support employers can offer:

Bredehoeft: “Small organisations often say, they cannot afford to pay for extra parental leave. But there is so much you can do to support your employees to create a culture that women and men can thrive while they also have children.”

While cost is the main barrier for employees to increase paid parental leave. The cost of losing talent is higher.

Yu said: “The cost of replacing an employee can be anywhere from half to two times their annual salary, and losing a star team member can cost two to three times their salary.”