WHILE the mainstream media bloviates over a mythical and propagandised “global heatwave“, things couldn’t be more different and dangerous down-under, especially for Kangaroos!

Canberra Civic viewed from Mount Ainslie with Lake Burley Griffin and Mount Stromlo in the background. By Bidgee – Own work, CC BY-SA 3.0, Link

(CNN)Mobs of kangaroos have been raiding patches of grass in the Australian capital Canberra, driven to the city’s sports fields, back yards and roadsides by food scarcity.

Canberra has more than 30 nature reserves, with most hosting hundreds of Eastern Grey Kangaroos, and it is not unusual to see them in the reserves or in roads or yards nearby, Australian Capital Territory (ACT) Parks and Conservation Service Director Daniel Iglesias told CNN.

But he said this winter the animals were far more visible.

“Canberra is experiencing a perfect storm of hardship for its kangaroos. New records have been set in Canberra for very cold, frosty nights this winter. This, coupled with very dry conditions with very little rain at all in June and July, means there is very little food for kangaroos, ” Iglesias said, via email.

“Sports ovals, suburban yards, schoolyards and roadsides are the few places offering any green grass at all in Canberra at the moment and they act as magnets for kangaroos,” he said.

Canberra, which is part of the Australian Capital Territory, our version of District of Columbia, is a hotspot of Australian CAGW enthusiasts. The green obsessed ACT government funded the original production of the play Kill Climate Deniers.

No doubt the locals will blame global warming for the distress of ACT’s kangaroo population.

GLOBAL July temps according to UAH satellite data set were slightly up on June, to 0.32C above the global average. That’s up 0.11C from June’s 0.21 deg C. 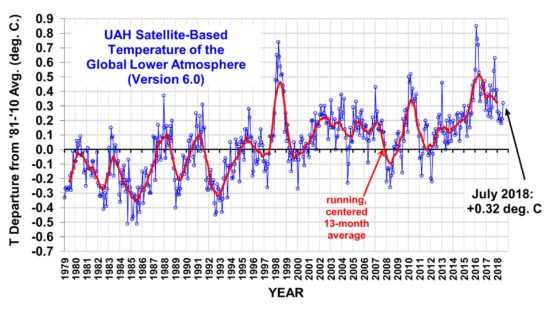 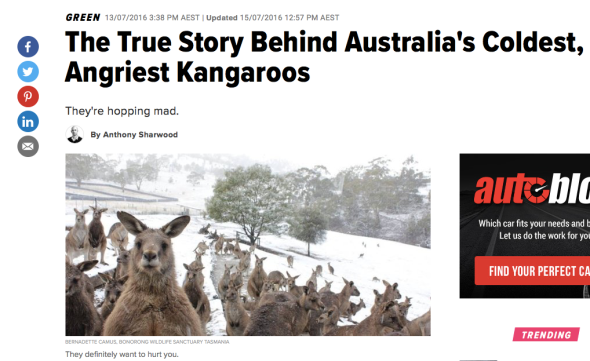