Image: Vox: Conservatives Reject Climate Action Because They have More “Sensitivity to Fear”

The BBC has just launched its Undiscovered Worlds series, with the intrepid Steve Backshall kayaking up the Scoresby Sund , the world’s largest fjord in Greenland.

Adventurer and naturalist Steve Backshall is on a mission to visit parts of the world yet to be explored.

On this expedition, he is in the Arctic to kayak up the largest fjord in the world. It is a dangerous undertaking, only made possible because the sea ice has broken up early here following the warmest winter on record. It is a chance for Steve and his team of explorers to see what impact global warming could be having on this pristine wilderness. They face many threats, from perilous sea ice that could crush their boats to a terrifying encounter with a hungry polar bear 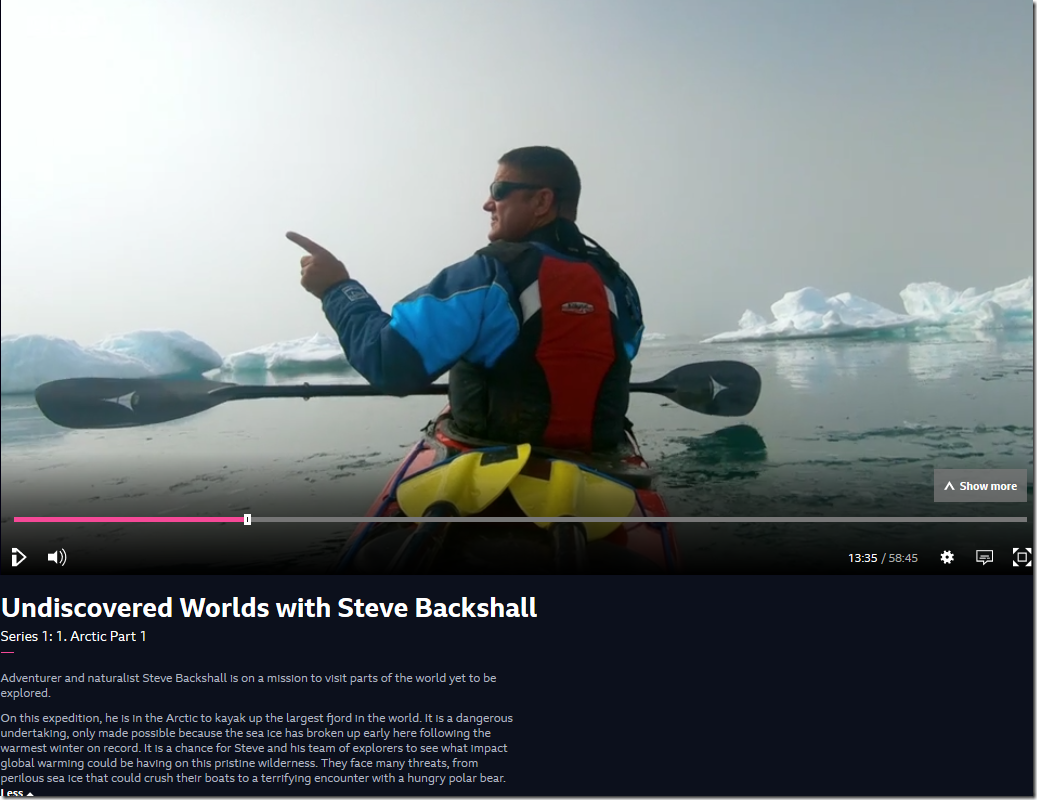 According to the film’s producer, Rosie Gloyns, interviewed in the Telegraph:

I was filming Undiscovered Worlds, a BBC documentary airing on Easter Sunday, along with presenter Steve Backshall. We kayaked up the Scoresby Sund in Greenland, the world’s largest fjord, surveying the damage inflicted by climate change, which is melting the region’s ice and destroying habitats for local wildlife.

The sea ice around Greenland is following the same trend seen all across the Arctic, shrinking in size and melting earlier in the year, depriving polar bears of their prime hunting habitat and making their behaviour less predictable. Indeed, paddling as far as we could into this beautiful country, it was clear that the situation was more grave than we had realised, and the fjord – which would usually have been covered with sea ice at that time of year – was a pale imitation of itself.

In normal years, it would have been full of breathing holes for seals, and local Inuits would have been using dog sleds to propel themselves across. Instead, the ice atop the fjord had melted earlier in the year than ever recorded, and the point where the ice meets the water had receded disturbingly far up the fjord.

It will come as no surprise to hear that the truth is not quite what the BBC would like you to believe!

First, let’s check exactly where they are: 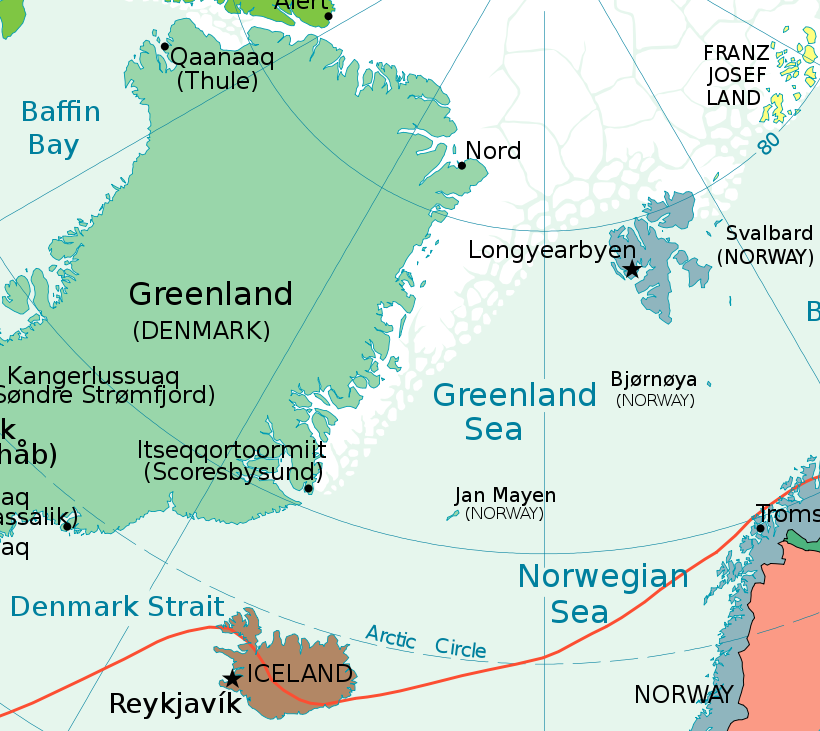 Now, let’s check out the claim about sea ice:

The sea ice around Greenland is following the same trend seen all across the Arctic, shrinking in size and melting earlier in the year

In fact, sea ice around Greenland at this time of year has barely changed at all since 2003, the first year included in the DMI dataset. Indeed, arguably it is thicker now there: 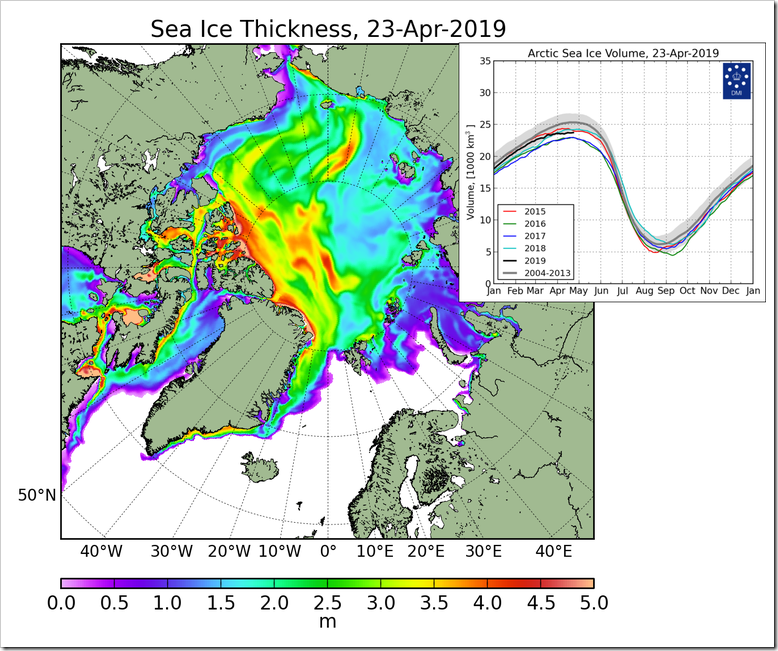 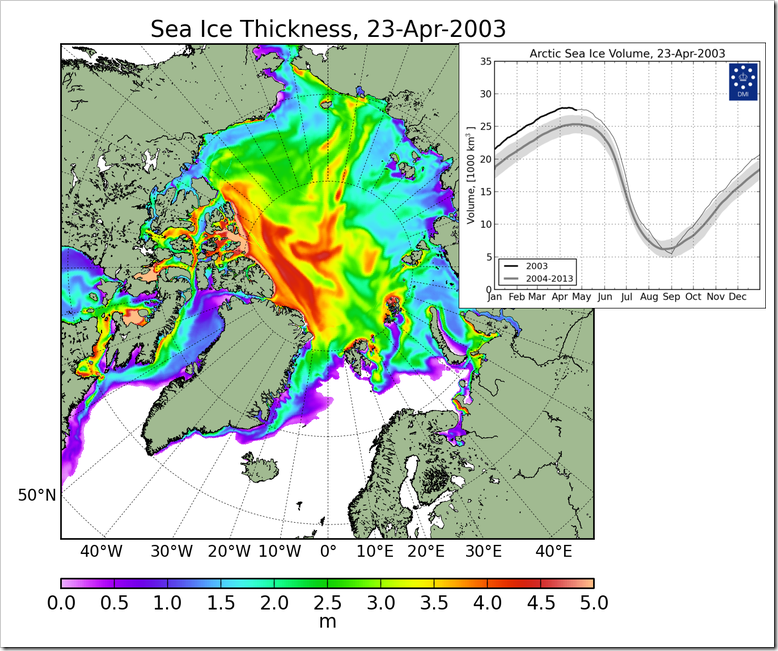 Gloyns seems to be confused between sea ice and fjord ice, which are two totally different things, according to local travel experts, Nanu Travel. It is an important distinction, because the latter is affected much more by local weather conditions.

And just what have those weather conditions been like recently? The Washington Post’s Capital Weather Gang report: 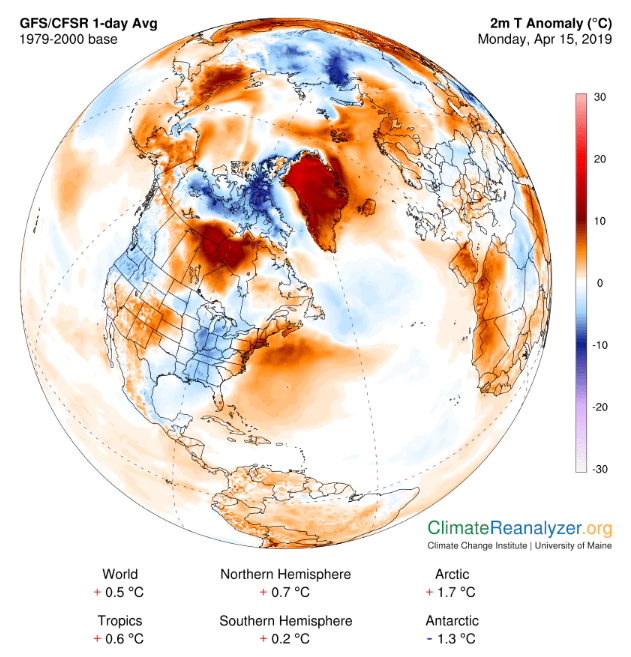 Greenland is baking, too. In fact, its summer melt season has already begun — more than a month ahead of schedule.

Marco Tedesco is a professor in atmospheric sciences at the Lamont Doherty Earth Observatory of Columbia University. He monitors behavior of the cryosphere — the part of earth’s water system that is frozen. He says melting of this extent shouldn’t begin until May. “The first melt event was detected on April 7,” he wrote in email.

“Air temperature anomalies were up to more than 20 degrees Celsius [36 Fahrenheit] above the mean,” noted Tedesco. His team has been eyeing Greenland’s southeast coast as ground zero for the early-season thaw. “Surface air temperature jumped to 41 degrees on April 2, up from minus-11,” he said. Temperatures dropped below freezing briefly before again soaring into the 30s, where the mercury has held steady for most of the past week.

“The subtropical jet stream,” wrote Jennifer Francis, senior scientist at the Woods Hole Research Center in Falmouth, Mass. It’s teamed up with the polar jet to “transport warm, moist air from near Florida northward into southern Greenland,” she explained. “Locking this pattern in place has been a strong ridge — a northward bulge in the jet stream — just east of Greenland.”

In other words, the jet stream has brought unusually mild weather to Greenland. It is in fact part of the same weather patterns which have brought dry, sunny weather to the UK in the last two months, with high pressure dominating. It has nothing to do with global warming.

We can of course speculate about what caused the jet stream changes, but what we do know is that temperatures in East Greenland are little different to the 1930s and 40s.

It seems high likely that similar early melts occurred in those times as well, except the BBC weren’t around to film it. 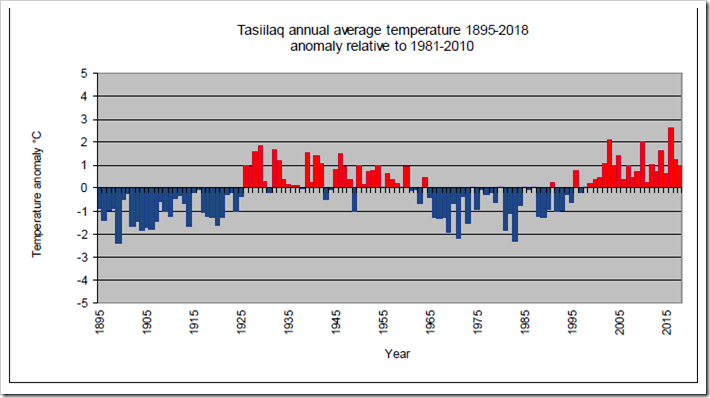 Backshall talks to some of the locals, who inevitably only remember that much colder interval in the 1970s and 80s. To them the current climate is not normal, a message the BBC is happy to propagate.

Meanwhile, at the top of the Scoresby Sund, the Daugaard-Jensen glacier is still in the same position as it was in 1980: 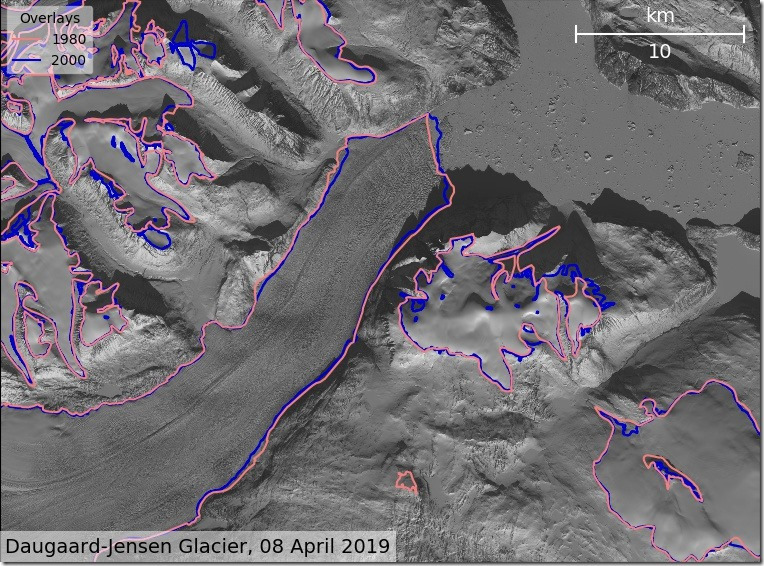 The more things change, the more they stay the same, it seems!