Aided by a politically correct culture of “tolerance”, the Muslim Brotherhood (MB) is secretly building a “parallel” society in Sweden by infiltrating organisations and political parties, a government report has concluded.

Surprisingly, the document takes aim at “political elites” for fostering a doctrine of multiculturalism and silence, which can help and facilitate the nefarious ends of anti-democratic organisation like the Brotherhood.

Somewhat predictably, however, the publication of such claims in Sweden – where open criticism of liberal, multicultural ideals is rare – has caused a row, with critics labelling the report “conspiratorial” and claiming it misrepresents Islam.

Published Friday, the document was commissioned by Sweden’s Civil Contingencies Agency (MSB), part of the country’s Ministry of Defence, which is responsible for civil protection and public safety.

The paper’s authors claim the Brotherhood is working to increase the number of practicing Muslims in Sweden, encouraging tension with Secular society, and targeting political parties, NGOs, academic institutions and other civil society organisations.

They also slam the “established structure of values among the country’s political elite [which] places a high value on ‘acceptance’ and ‘tolerance’ of citizens who are in some sense different from the mainstream”.

In the report, the Islamism of the MB is described as a totalitarian political ideology born out of Islam, a religion. This can make it “difficult to oppose what on the surface appears to be (a vulnerable minority) religious rights”, it explains.

Critics, therefore, “run the risk of being called ‘racist’ or ‘Islamophobic’ and because of the situation in Swedish society such classifications endanger people’s careers”.

The press was quick to label these claims inflammatory, and 22 academics and “experts” in religion have published a blog post questioning the methodology of the research.

The academics – from many of Sweden’s leading universities – say it is “almost conspiratorial” to suggest criticism of Islamism is difficult in Sweden. They also insist the claim that the Brotherhood is building a parallel society is refuted in past research.

In response to the blog post, the department has refuted the criticism of their methodology, and the report’s editor, Magnus Norell, told public service broadcaster SVT:

“Had they smoked something before they read it? You just need to read the report. If someone doesn’t accept this, there’s not much I can do about it. It’s proven.”

“Islamists aim to build a parallel social structure competing with the rest of the Swedish society the values of its citizens. In this sense, MB’s activists pose a long-term challenge in terms of the country’s social cohesion”, it states.

Adding: “Migration from Africa and the Middle East is likely to continue in coming years, both in form of relatives and refugees…

“Given that MB’s goal is to increase the number of practising Muslims in Swedish or European territory, there is a great likelihood that a ‘tug of war’ will occur between the majority community and the Islamic community with the MB’s encouragement…”

The authors of the blog post objected to this claim. “The [report’s] authors seem to conclude that Swedish Islam is a homogeneous phenomenon and that Swedish Muslims are led by the Muslim Brotherhood…” they write.

“It is a conclusion that goes against the overall research, which rather points towards the Muslim community being diverse and there being competition between Muslim groups…”

Founded in 1826, the MB aims to create a global, Sunni Islamic Caliphate by organising Muslims politically. It is arguably the largest Islamist organisation in the world and has links to the Muslim Council of Britain and many other mainstream European Islamic institution.

The group has been accused of fostering links to militants and is considered a terrorist organisation by the governments of Bahrain, Egypt, Russia, Saudi Arabia, and the United Arab Emirates. 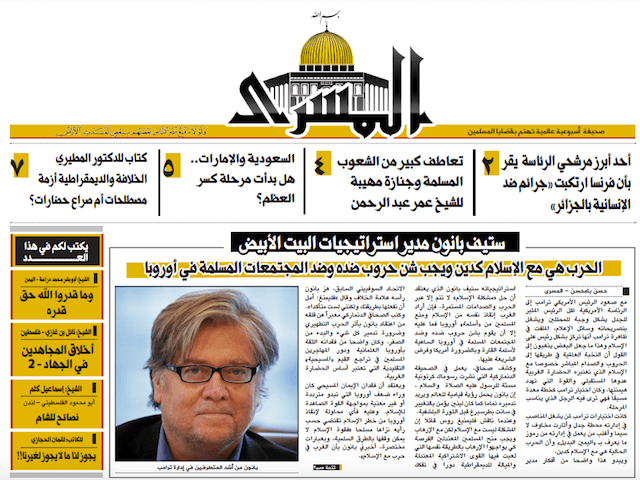 According to a translation from Quartz:

The article claims that Bannon wants armed struggle—that he believes that “the forces of Islam cannot be stopped by peaceful means,” citing a conversation a Danish journalist says he had with Bannon in May 2016 (likely referring to this article). Before becoming advisor to the president, Bannon did refer to conflict with Islam, telling an audience at the Vatican via Skype in 2014: “We’re now, I believe at the beginning stages of global war against Islamic fascism.”

During his time hosting the Sirius XM radio show Breitbart News Daily and its predecessor, Bannon regularly condemned the terrorist group. The AQAP publication has returned the favor.

In November 2016, the Al Masra published a lengthy article chastising Bannon and Breitbart News as “racist.”

“He has already published racist titles against women, Jews, and Muslims. Bannon has changed Breitbart website into far-right forum for Neo-Nazis groups who believes in the white race supremacy and anti-Semitism,” reported Al Masra, warning that Bannon would bring “white race supremacy” into the White House.

Some far-left critics in the press and social media, who would likely find the label “Islamic extremist” offensive, are saying that al-Qaeda is using Bannon’s picture to recruit potential recruits to its cause.

The Yemen-based AQAP publication has also criticized President Donald Trump and America as a whole.

In October, Al Masra noted that then-presidential candidate Donald Trump, who is “famous for his-anti Muslim attitude,” would cause an increase in anti-U.S. sentiment from Muslims if elected president.

U.S. officials describe AQAP as the most dangerous branch of al-Qaeda. While a U.S.-backed coalition in Yemen led by Saudi Arabia has primarily focused on Iran-allied Shiite Houthi rebels, AQAP has flourished.