HE has been labeled a “planet killer” amongst a plethora of standard smear and slime attacks aimed at anyone who dares question the veracity and motives of the $1.5TRILLION Climate Industrial Complex. 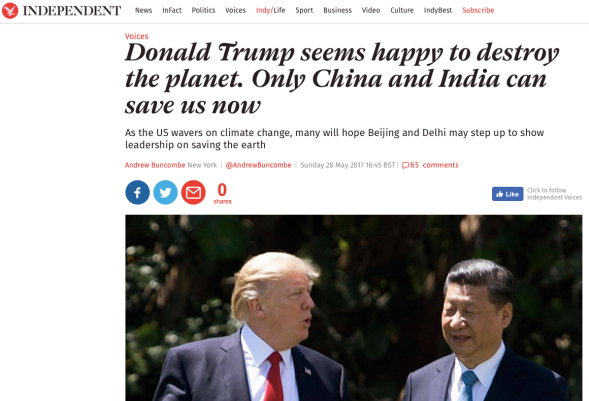 Donald Trump seems happy to destroy the planet. Only China and India can save us now | The Independent

Did Donald Trump Just Make the Planet Hotter? – The Atlantic

WHERE Trump is 100% correct and the climate bedwetters 100% wrong is that US emissions have been falling, largely thanks to the shale gas boom.

THE graph climate alarmists and unreliable-energy rent seekers don’t want you to see:

COP23 In One Graph, The Best Reason Ever Why The USA Doesn’t Need To Be In The #ParisAgreement | Climatism

WHY on earth would Trump sign up to an economy and job-destroying Paris ‘deal’, when the two biggest ‘polluters’ on the planet – China and India – get a free pass to burn unlimited emissions until 2030?!

AND, why would Trump sign up to the latest UN wealth redistribution scam when Europe, the epicentre of punitive climate change policy and green energy madness, fail to meet their own emissions ‘commitments’ despite spending trillions of €uros of other peoples’ money on failed ‘green’ energy?

CO2 emissions from energy use for 2017 published by Eurostat, the statistical office of the European Union. 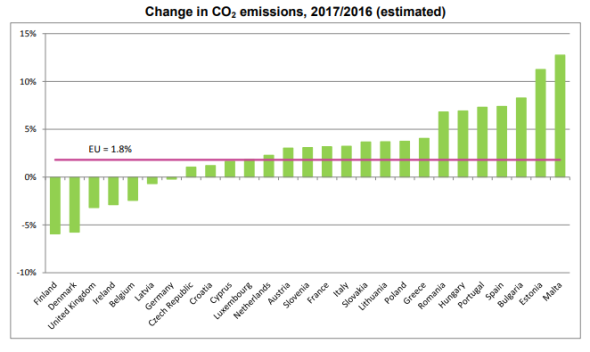 BUT, AREN’T WIND AND SOLAR ‘POWER’ MEANT TO LOWER EMISSIONS?

URELIABLE-energy propagandists claim that wind, solar and other weather-dependent ‘energy’ sources will “Save The Planet” by lowering plant-food (CO2) emissions. But, the opposite is, in fact, occurring…

ONE inconvenient reason for the rise in emissions, that you won’t hear reported on MSM news, ever, is because…

Source : IF CO2’s Your Poison, Renewable Energy Is No Antidote | Climatism

CLIMATE bedwetters need to take a deep, hard look at themselves through the epicentre of green central planning and draconian climate change policy overreach – Europe – where despite spending literally trillions of €uros, of other peoples’ money, on unreliable-energy – wind and solar – emissions have been rising, not falling!

The SNP often claim that renewable energy is helping to make Scotland energy independent, presumably to bolster the case for independence.

And it is certainly true that in 2016 Scotland supplied 9.6 TWh to England (net of receipts), 21% of total generation.

However, it has been running at this sort of level and higher since 2006, so wind power has little to do with the matter. Indeed, transfers have actually been dropping in recent years.

If we look at total generation, we see that it too has been dropping recently.

The closure of Longannet coal plant during 2016 is mainly responsible for this, and Scotland will lose another 1.8 TWh in 2017 as the full effect of closure takes effect.

This will be offset by an extra 5.2 TWh of wind power, which came on stream last year. But, with subsidies for onshore wind now being phased out, growth in renewables will slow down in the next five years.

More importantly though is what is happening to nuclear power in Scotland, which still accounted for 42.8% in 2016:

Whether it makes it that far is highly debatable. Currently one of its reactors is offline, after cracks in the core were found earlier in the year. Its owner, EDF, expects output to fall by 3 TWh this year as a result.

What this tells us about the longer term prospects is anybody’s guess. But Scotland won’t be able to make up this loss of output readily, as both of the nuclear plants, Hunterston B and Torness, were already running at close to capacity prior to this, as was the only major CCGT plant at Peterhead.

Although Scotland will remain a net supplier to the rest of the UK for years to come, the gradual erosion of reliable baseload will actually mean that Scotland itself will be ever more reliant on imported power from England.

Interestingly, Wales is actually a much bigger exporter of electricity to England than Scotland is, which may come as a shock. Wales exported 18.4 TWh to England in 2016, nearly double the Scottish figure of 9.6 TWh.