Millions of shorebirds descend on the Arctic each year to mate and raise chicks during the tundra’s brief burst of summer. But that burst, which usually begins in mid-June, never arrived this year for eastern Greenland’s shorebirds, a set of ground-nesting species. Instead, a record late snowpack—lingering into July—sealed the birds off from food and nesting sites. Without these key resources avian migrants to the region will not reproduce in 2018, experts say. Breeding failures like this may grow more common because some climate change models predict increased springtime snow in the shorebirds’ nesting habitat.

Snowmelt usually allows shorebirds to begin nesting on eastern Greenland’s treeless tundra during the first half of June, says Jeroen Reneerkens, an avian ecologist at the University of Groningen who has studied these birds since 2003. However, when he arrived this year at Zackenberg Station on June 14 to survey sanderlings, a species of Arctic-breeding shorebird, he found they had nowhere to construct their nests. “The tundra was 100 percent covered in snow, and it was a very deep layer,” he says, estimating an average depth of about one meter. “It was a big shock to see the place like that,” he adds.

Most years, mid-June is also a time of song in eastern Greenland—shorebirds croon to attract mates and defend breeding territory. But this year the tundra was “truly silent,” Reneerkens says. “That was very unusual.” The few shorebirds he did encounter, including sanderlings, ruddy turnstones and red knots, wandered the snow-free patches outside the station’s buildings in search of food. “They were just starving,” he says. “I realized these birds were not getting ready to breed at all. They’re just in survival mode.”………………

Researchers elsewhere in the Arctic are also reporting unusually late snowmelt this year, with repercussions for shorebirds. Richard Lanctot, a researcher for the U.S. Fish and Wildlife Service, believes record late snowmelt inhibited nesting near Utqiavik (formerly Barrow) on the northern coast of Alaska. His group’s nest count this summer so far is among the lowest since they began monitoring in 2003. Shiloh Schulte, an avian ecologist who works in northeastern Alaska for the conservation nonprofit Manomet, says snowmelt was more than two weeks later than normal in his region. He noticed flocks of long-billed dowitchers and American golden plovers gathering to migrate south without breeding. “Everything needs to be timed perfectly for these birds to be successful,” Schulte says of the short Arctic summer. On Southampton Island in the Canadian Arctic Archipelago, shorebirds nested at less than half their typical densities due the late snowmelt, according to research scientist Paul Smith of Environment and Climate Change Canada. Even with similar trends throughout the North American Arctic, nowhere has been hit harder than eastern Greenland.

And naturally, it is all the fault of global warming!

Senner fears this nonbreeding year in eastern Greenland could herald an alarming trend. Climate models predict the Arctic atmosphere will hold more moisture as global temperatures rise, he notes. A wetter atmosphere means more snow in winter and spring, potentially causing late snowmelt to interfere with shorebird reproduction. He says the bird populations should be resilient to a single poor breeding year like 2018 but worries what might happen if this year’s catastrophe becomes standard. “Even though things aren’t normally as extreme as the current situation in Greenland,” he says, “this is the kind of thing that seems to be happening more and more frequently across the Arctic”—which is probably bad news for birds.

Of course, it was only two years ago that we were told Greenland’s summers were getting warmer.

Intense Ice Anomalies on Greenland & Heat on Our Earth

Ice anomalies on Greenland as eight billion tons snaps off the end of calving Helheim Glacier, but at the same time Greenland gains 600 billion tons of ice since Sept 2017 and five feet of snow is forecast for Greenland over the next week. Incredible 15+ foot thick ice west of Baffin Island, Arctic temperatures below the 30 year average and June global temperatures are below 2017 June temperatures.

Didn’t we see this up close before? Yes, we diiiiid!

Are they running old scary stories about glacier calving? A process that is over 100% natural .. and got nothing to do with plant food!? (I exaggerate only for effect, just a note in the unlikely event a snowflake passes by). 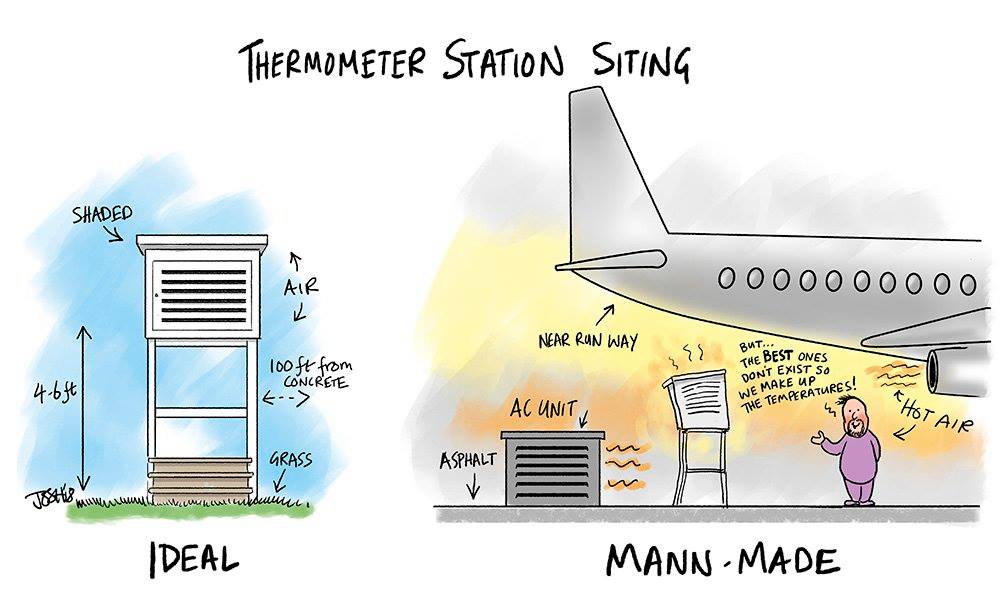