Image: 1 In 4 Statisticians Pressured To Commit Scientific Fraud. As the saying goes, “There are three kinds of lies: lies, damned lies, and statistics.” We know that’s true because statisticians themselves just said so. 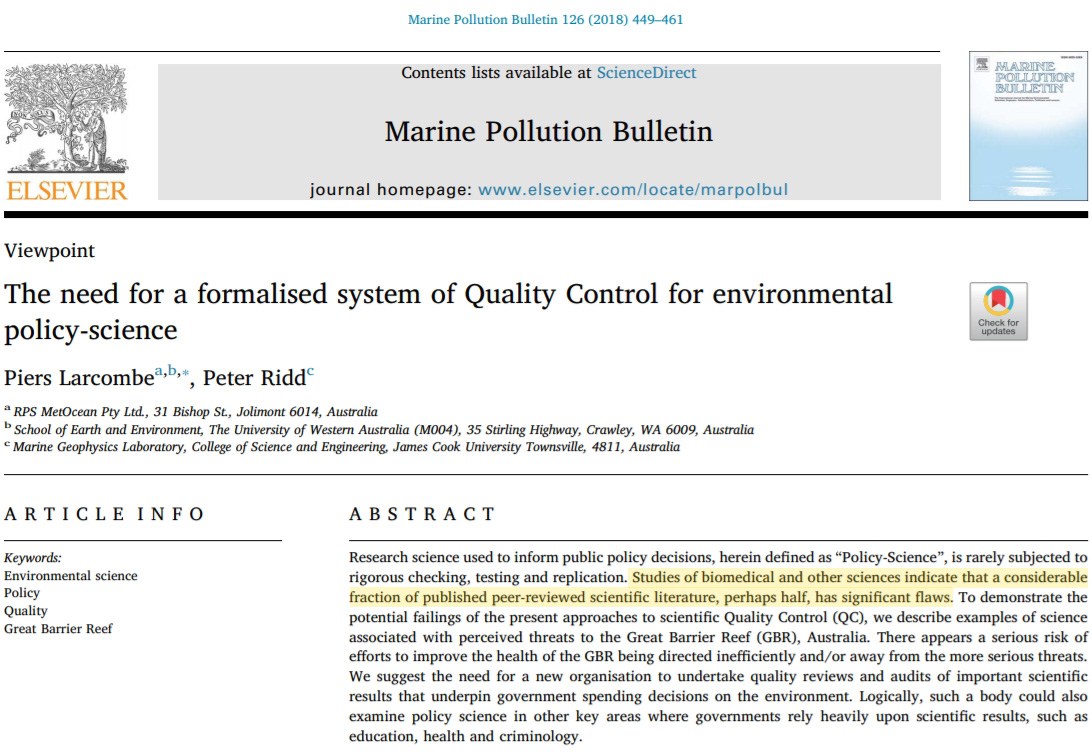 “A number of biases internal and external to the scientific community contribute to perpetuating the perception of ocean calamities in the absence of robust evidence.”  – Duarte et al., 2015

Within a matter of days after the press release for a newly published Nature paper spewed the usual it’s-worse-than-we-thought headlines throughout the ‘alarmosphere’ (Washington Post, BBC, New York Times), the paper’s results were assessed to have “major problems” by the author of multiple CO2 climate sensitivity papers (Lewis and Curry, 2015, 2018).

A glaring miscalculation was quickly spotted that changed not only the results but consequently undermined the conclusion that estimates of climate sensitivity to doubled CO2 may be too low.

And yet the paper was able to pass through peer review anyway.

A few years ago Dr. Michael Mann was the lead author of an embarrassingly non-scientific paper fraught with glaring methodological and statistical errors.

A post-publication reviewer (statistician Dr. William Briggs) wrote in his point-by-point critique of the paper that “Mann’s errors are in no way unique or rare; indeed, they are banal and ubiquitous.”

Despite the glaring errors, the paper made it through peer-review and was published in Nature‘s Scientific Reports journal anyway.

70% OF “HOAX” PAPERS CAN GET PUBLISHED IN PEER-REVIEWED JOURNALS

Analyses indicate that “fake peer review” often goes undetected, and as much as 70% of deliberately-written “hoax” papers with ridiculous and meaningless results can get published in peer-reviewed scientific journals.

“Any reviewer with more than a high-school knowledge of chemistry and the ability to understand a basic data plot should have spotted the paper’s shortcomings immediately. Its experiments are so hopelessly flawed that the results are meaningless. … The hoax paper was accepted by a whopping 157 of the journals and rejected by only 98. Of the 106 journals that did conduct peer review, 70% accepted the paper…”  (Murphy, 2017  The Failure of Peer Review)

A NEW PAPER CITES ANALYSES THAT FIND HALF OF THE PEER-REVIEWED SCIENCE RESULTS ARE FLAWED, NOT REPLICABLE

Earlier this year, a review paper (Larcombe and Ridd, 2018) published in the journal Marine Pollution Bulletin delivered a stinging rebuke to the modern version of science’s disturbing lack of replicability and verifiability. 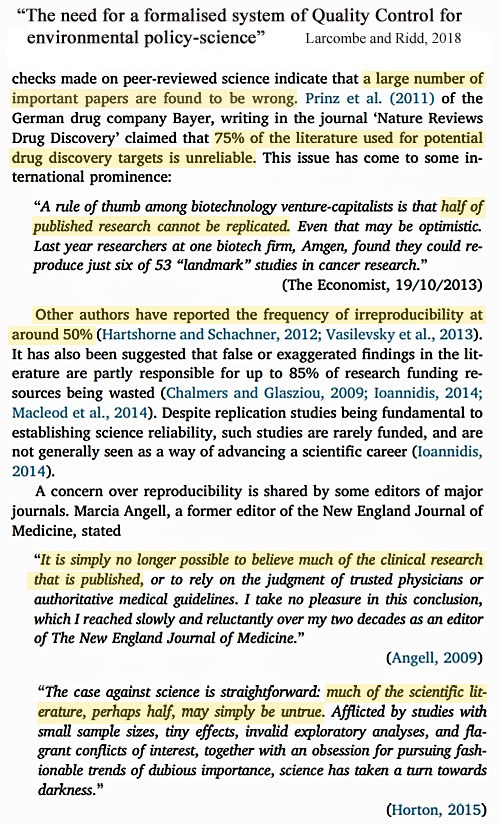 The authors go on to detail a large volume of examples when peer-review failed to detect errors in Great Barrier Reef (GBR) coral research.

Confirmation bias appears to permeate the peer-reviewed literature, slanted in the direction of finding evidence for a catastrophic decline in coral health.

This isn’t the first time that marine research has been called out for overselling calamity (see Cressey, 2015, “Ocean ‘calamities’ oversold, say researchers – Team calls for more scepticism in marine research.”) and falling “into a mode of groupthink that can damage the credibility of the ocean sciences.”

As just a single example among the many provided, Larcombe and Ridd reviewed the De’ath et al. (2009) study in which an “unprecedented” decline in GBR corals was alleged to have occurred between 1990-2005.

After a reanalysis of the measurements and methods used, Larcombe and Ridd used corrected data to show there has actually been “a small increase in the growth rate” of corals since the early 1900s (see below image) instead of the dramatic decline after the 1990s documented in the peer-reviewed paper.

These errors slipped past the reviewers’ notice too.   The publication of flawed results has seemingly become so common that it’s no longer even surprising.

“This paper [De’ath et al. (2009): Declining coral calcification on the Great Barrier Reef.] studied 328 corals on the GBR and indicated a 14% reduction in growth rates between 1990 and 2005. It stated that the corals of the GBR are declining “at a rate unprecedented in coral records reaching back 400 years”. Subsequent reanalysis of the data indicated that the apparent recent reduction in growth rate was caused by a) problems with the physical measurements of calcification, which systematically biased recent growth bands to give lower growth rates (D’Olivio et al., 2013; Ridd et al., 2013), and b) an unjustified assumption that coral growth rate does not change with the age of the coral (Ridd et al., 2013). With these taken into account, the dramatic fall in growth rate after 1990 is no longer evident, and a small increase in growth rates since the early 1900’s appears (Fig. 6). Further, D’Olivio et al. (2013), working on a different set of GBR corals, showed an increase in coral calcification rates on middle and outer shelf reefs, which together represent 99% of GBR corals, of 10% for the period ~1950 to ~2005, but a decrease of 5% per decade between 1930 and 2008 on inner-shelf reefs, which represent only 1% of GBR corals. Therefore, it would be hard to glean from these datasets that there is a documented decline in coral ‘growth’ parameters, and even harder to attribute the change to a particular cause.”