This Thursday, December 6th, a United States resolution will be put to the vote in the UN General Assembly condemning Hamas rocket attacks on Israel and calling for an end to violence.

The United States has succeeded in winning over support from all 28 member states of the European Union to support the resolution, after incorporating other relevant UN resolutions, but without referring to a two-state solution.

US delegation leader Nikki Haley, who is leaving her position at the end of the year, said that the resolution was not in support of a specific peace plan. Any country would be free to vote for or against the activities of Hamas, as well as other terrorist groups such as Islamic Jihad, the US delegation said.

“If the United Nations fails to accept this resolution, they have no right to participate in any future peace negotiations,” the delegation said.

Hamas is now trying to thwart the impending condemning vote. As early as last week, Hamas leader Ismail Haniyah sent a letter to the General Assembly in which he complained about the planned vote. International law would allow all Palestinian organizations to use any means to fight against Israel until “Palestine from the River to the Sea is liberated” he stated.

Israel UN Ambassador Danny Danon sees the Thursday vote as a historic opportunity to condemn Hamas. “Any country voting against condemning Hamas should not later turn to the United Nations if they become victims of a terror attack,” Danon said at the annual IAC conference, which took place this past weekend in Miami, Florida.

“We talked to Ambassadors from around the world and explained the importance of their support,” Danon continued. “We have created a broad consensus in the United Nations regarding Hamas, and that is a great achievement for us.”

No doubt Iran hoped the introduction of advanced Russian anti-aircraft systems to Syria would deter further Israeli air strikes on its installations in the war-torn country.

But massive explosions at Iranian and Hezbollah weapons depots in Syria overnight Thursday were attributed by Arab media and Syrian officials to the Israel Air Force. Israel declined to comment, as it typically does, but local and international media touted the operation as a rare exception to new Russian rules of engagement in Syria. Arab media claimed that Israel lost a plane in the strike. Israel insists it did not.

However, none of that mattered much amid reports that Iran had started to supply weapons direction to Hezbollah at the terrorist militia’s base of operations in neighboring Lebanon.

Israel’s air strikes in Syria over recent years had been aimed at denying Iran both the ability to establish a military foothold in Syria and providing Hezbollah with the kinds of weapons that would shift the balance of power.

This week, Israel learned that Iran’s military was flying direct flights over Iraq and Syria to Beirut, and directly supplying Hezbollah in its home country. Cutting this new supply route would require air strikes on Lebanon, which Israel will be reluctant to consider. 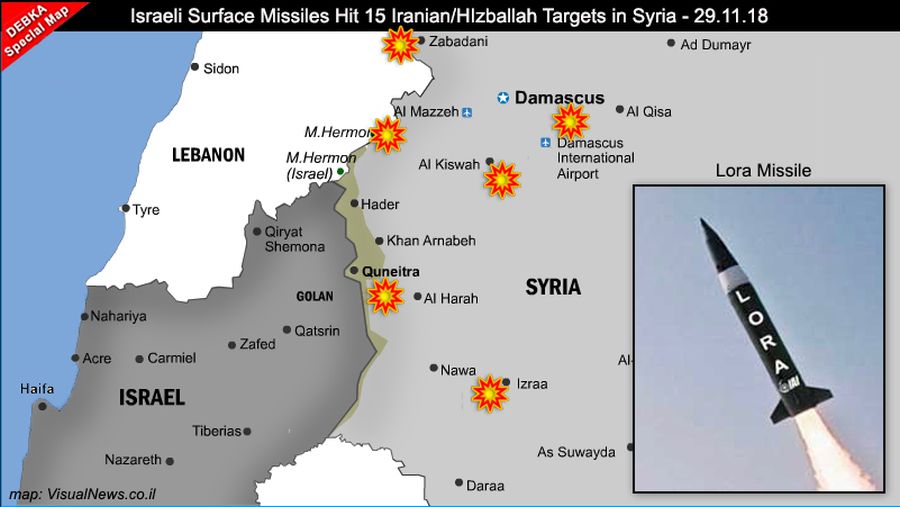 For 75 minutes on Thursday night, Nov. 29, the IDF blasted Iranian, Hizballah and Syrian targets in its biggest ever surface missile attack on Syria, DEBKAfile’s intelligence and military sources can now reveal. This was not an Israeli air force strike such as those conducted for two years against Iranian targets in Syria. Two kinds of ground-to ground missiles were used in this cross-border offensive: a Long-Range Artillery Weapon system known as LORA which has a range of 400km; and the guided, short range Tamuz. They raked across at least 15 sites, most of them belonging to the Iranian Revolutionary Guards Corps (IRGC), pro-Iranian militias and Hizballah. They covered an area ranging from the Syrian Hermon slopes in the north, down to the Iranian command center at Izra north of Daraa in the south (See attached map.)

Among the locations targeted was Al-Zabadani, a town on the Damascus-Beirut highway near the Lebanese border in the west, which Hizballah has taken over and established there its command posts, training camps and ammunition and rocket depots. At Al Kiswah south of Damascus, the IDF missiles struck Iran’s central command post in Syria, which is known as the “Glass House.”

Blasted too were the command posts and structures of two Syrian brigades which are structured for Syrian officers to command a hodge-podge of Hizballah, pro-Iranian Shiite and Palestinian militias. Israeli missiles also struck the Syrian Army’s 90th Brigade which rules the area north of Quneitra and 112h Brigade which is stationed south of this Golan town.
The massive Israeli cross-border assault inflicted heavy casualties on the Iranians, their militias, Hizballah and the Syrian army, including fatalities. Up until Friday night, neither Iran, Syria nor Hizballah had disclosed the precise targets smashed by the IDF 24 hours earlier. The Russian military in Syria was also silent.