The House of Representatives overwhelmingly rejected an attempt to impeach President Trump after a liberal Texas congressman forced a vote on his effort.

Democratic Rep. Al Green, who has repeatedly called for the president’s removal, introduced two articles of impeachment against Trump on Wednesday.

But lawmakers immediately voted to effectively kill his resolution, with 364 voting to table it and 58 Democrats voting to move ahead.

In a dramatic speech on the floor ahead of the vote, Green called Trump “unfit” for office and accused him of “high misdemeanors.”

The symbolic vote had been expected to fail in the Republican-controlled House. It put some lawmakers in competitive districts in a tough spot by forcing them on the record about impeachment.

Lawmakers did not actually vote on the actual articles of impeachment, but on a procedural measure that would have led to a vote on them.

“As I have said before, this is not about Democrats, it is about democracy,” Green wrote in a memo to his colleagues. “It is not about Republicans, it is about the fate of our Republic. May everyone vote their conscience knowing that history will judge us all.”

Green has discussed his intention to impeach Trump since last spring. In October, Green filed impeachment articles that nearly forced a vote — until House Democratic leaders persuaded him to abandon the effort.

In his memo to lawmakers, Green didn’t allege “obstruction of justice” or reference the ongoing investigation into the 2016 presidential campaign’s connection with Russia.

Instead, Green highlighted Trump’s supposed association with “White Nationalism, Neo-Nazism and Hate,” as well as “Inciting Hatred and Hostility,” as offenses worthy of impeachment.

“Friends, whether we like it or not, we now have a bigot in the White House who incites hatred and hostility,” Green wrote in a letter.

House Minority Leader Nancy Pelosi, D-Calif., has insisted that any impeachment effort should be put on hold until there is evidence of an impeachable offense. 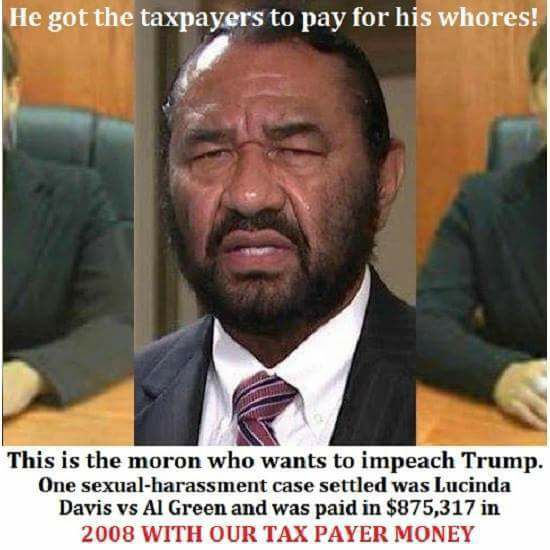