In recent weeks, the rapper Ye, formerly known as Kanye West, brought attention to the long-standing issue of antisemitism. His harsh comments encouraged other acts of hatred and fanned worries within the Jewish community.

The Holocaust Museum LA received a barrage of threatening and hateful messages after inviting Ye for a tour, which the rapper declined. However, his words also sparked action: Last month, a group hung banners over a Los Angeles freeway with antisemitic messages including “Kanye is right about the Jews.”

“There’s always been threats, there’s always been antisemitism. But it feels like an epidemic right now,” says Beth Kean, CEO of the Holocaust Museum LA. “And the spread of hate and lies is just happening at a lightning speed, and Kanye really opened the floodgates a couple of weeks ago with his comments.”

No matter how well they are known, the issue is much greater than any one prominent figure (Ye has twice as many Twitter followers as there are Jews on Earth, the museum noted). In the United States, antisemitic occurrences are at an all-time high, and antisemitic speech is becoming more common in all spheres of politics and public life. 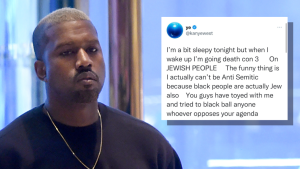 Kanye West has now had both his Instagram and Twitter accounts locked after antisemitic posts over the weekend.

RELATED: Camille Vasquez Has Decided Not to Represent Ye 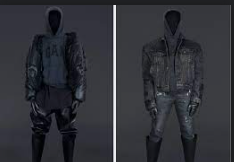 Manhattan law firm Cadwalader Wickersham & Taft has parted ways with Ye, formerly known as Kanye West, in the wake of recent antisemitic remarks by the rapper and designer.

RELATED: Ye Doesn’t Own His Sneaker Designs. So What Happens Next?

On Oct. 25, Adidas officially announced that it had terminated its deal with Ye. The decision came after a continuous avalanche of controversies surrounding the artist formerly known as Kanye West that began with the debut of a “White Lives Matter” T-shirt during his Yeezy Season 9 show at Paris Fashion Week, and continued with a string of public antisemitic remarks.