“Greenhouse Effect” is impossible because of convection, it’s really that simple!!

The “greenhouse (GH) effect” is the IPCC’s basic concept in global warming. The anthropogenic (man-made) global warming theory is based on the enhanced GH effect caused by GH gases.

There have been many comments on net pages that how carbon dioxide having only 400 ppm concentration can lead to so much warming as proposed by the IPCC.

This story is a piece of simple evidence that it cannot.

The basic information about the energy fluxes affecting the GH effect can be found in Figure 1. The radiation fluxes are practically the same as used in the energy balance presentation of the IPCC. 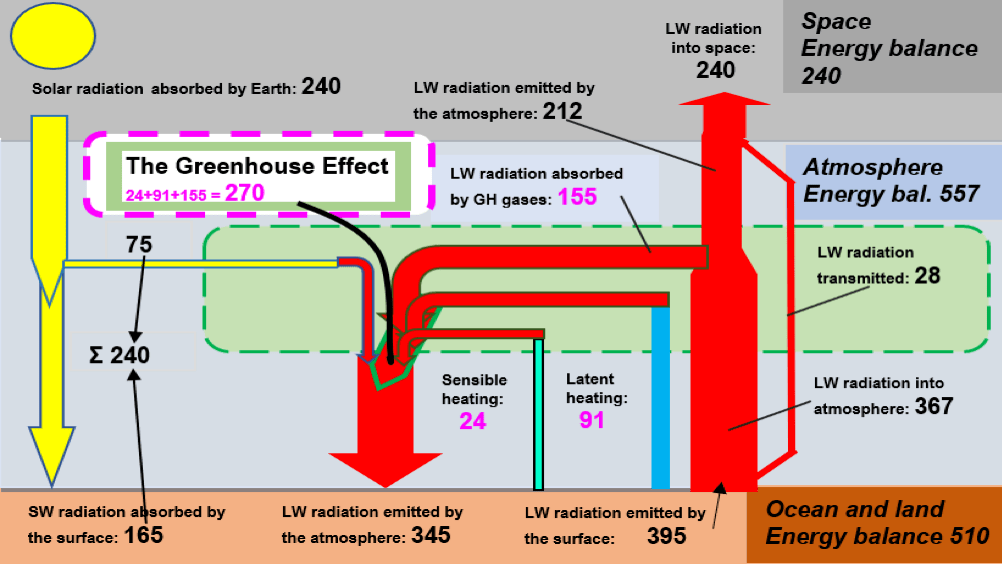 The Earth receives net energy of 240 Wm-2 as a difference between the incoming insolation and the reflected shortwave radiation at the top of the atmosphere.

This is also according to physical laws that the Earth must radiate the same amount into space what it receives because otherwise, the Earth would continuously cool down or warm-up.

The magnitude of the GH effect is simple to calculate, but it is a little bit theoretical. It is impossible to estimate accurately what would be the Earth’s surface temperature without the atmosphere and without the GH effect.

It has been generally agreed that theoretical temperature corresponding to the net radiation flux of 240 Wm-2 received from the Sun is the surface temperature without the GH effect.

This temperature can be determined by the radiation law introduced by Max Planck in the year 1901.

According to this law, a black surface having a temperature of -18°C radiates 240 Wm-2.

The average surface temperature is +15°C, and its difference to -18°C is 33°C. This 33°C has been generally accepted to be the magnitude of the GH effect. The GH effect definition is needed to explain what mechanism is resulting in this warming effect.

I think that only a few readers have ever read the GH definition of the IPCC.  This time the IPCC does not refer to any published scientific sources, but it has formulated the definition by itself since the First Assessment Report 1990.

It is easy to think that it is an old definition and it must be correct without any doubts. I show that you should check it because there is a serious flaw.

The definition of the GH effect, according to Assessment Report 5 (2013) is:

“The longwave radiation (LWR, also referred to as infrared radiation) emitted from the Earth’s surface is largely absorbed by certain atmospheric constituents – (greenhouse gases and clouds) – which themselves emit LWR into all directions. The downward directed component of this LWR adds heat to the lower layers of the atmosphere and to the Earth’s surface (greenhouse effect).”

So far so good – it is according to radiation and physical laws.

The obvious reason for the GH effect seems to be the downward infrared radiation from the atmosphere to the surface and its magnitude is 345 Wm-2. Therefore, the surface absorbs totally 165 + 345 = 510 Wm-2.

The real GH warming effect is right here: it is 270 Wm-2 because it is the extra energy warming the Earth’s surface in addition to the net solar energy.

The final step is that we must find out what is the mechanism creating this infrared radiation from the atmosphere.

According to the IPCC’s definition, the GH effect is caused by the GH gases and clouds which absorb infrared radiation of 155 Wm-2 emitted by the surface and which they further radiate to the surface.

This same figure has been applied by the research group of Gavin Schmidt calculating the contributions of GH gases and clouds.

From figure 1 it is easy to name the two other energy sources which are needed for causing the GH effect namely latent heating 91 Wm-2 and sensible heating 24 Wm-2, which make 270 Wm-2 with the longwave absorption of 155 Wm-2.

When the solar radiation absorption of 75 Wm-2 by the atmosphere will be added to these three GH effect sources, the sum is 345 Wm2.

Everything matches without the violation of physics.  No energy disappears or appears from the void. Coincidence? Not so.

Here is the point: the IPCC’s definition means that the LW absorption of 155 Wm-2 could create radiation of 270 Wm-2 which is impossible.

This violation of the law of physics is a trick on how the warming effects of GH gases can be practically duplicated as I will show.

Somebody may think that it does not matter if the total driving force of the GH effect is 155 Wm-2 or 270 Wm-2. It makes a big difference.

Or somebody may think that the IPCC may define the GH effect as they like. Yes, they can do so, as anybody can, but in the real world, any correct definition must obey the laws of nature.

This latter number is still the most referred figure even though it has been calculated applying a wrong atmospheric composition containing 50% less atmospheric water than the global average atmosphere, thus increasing – practically doubling –  the contributions of other GH gases like carbon dioxide.

By applying the right GH effect number of 270 Wm-2, the contribution of carbon dioxide in the GH effect is only 7.4% corresponding to 2.5°C.

It turns out that carbon dioxide is not a strong GH gas. A reader must now conclude if this description is scientifically correct meaning that the IPCC science has a massive error in the GH effect definition questioning the scientific basis of the anthropogenic warming theory.

And by the way, Wikipedia uses different numbers in explaining the IPCC’s GH effect covering the breaking of physical laws. Maybe this is the only case when a Wikipedia description is not according to the official science of the IPCC.

The Heartland Institute’s Naomi Seibt was a guest Thursday, February 27 on “The Daily Briefing with Dana Perino” on the Fox News Channel. She was invited on the program to talk about her work as a “climate realist” in her native Germany, where climate panic has taken hold among her generation, and the speech she will give at CPAC 2020.

If you know what you’re talking about and the empirical data did support your view you wouldn’t need fascism ..