BRITAIN is about to be plunged into its biggest deep freeze for 35 years as icy winds powered by the polar vortex sweep in from the Arctic.

The Met Office has warned people to brace themselves for significantly lower temperatures than usual as a glacial blast batters the UK. Forecasters say the public has got used to unusually balmy winters in recent years and are urging families not to get caught out.

The Met Office’s forecast for November, December and January warns that UK temperatures are set to plummet into the coldest category it has on record. And the forecast is so severe that the forecaster’s experts are even briefing the Cabinet Office, emergency services, transport bosses and councils over how best to respond to extreme icy conditions. 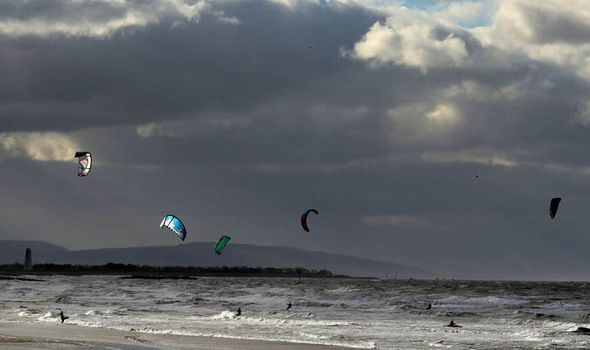 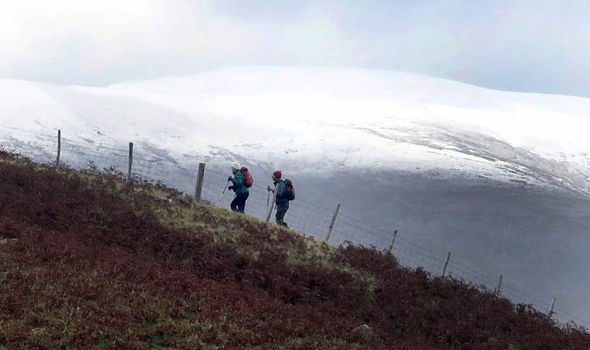 Walkers head out to the snow covered peaks in Cumbria yesterday

It blames the coming deep freeze on disruptions to the polar vortex wind, which will force it to divert south from the Arctic circle and bring freezing winds to Britain.

The last time this phenomenon happened, in 2010, temperatures in rural parts of the country plunged to a bone-chilling -16C.

In its long-range forecast the Met Office said: “Prediction systems indicate a high chance the polar vortex will be disrupted. Such a pattern would bring cold air to the UK.

“As a result, our outlook suggests an increased risk of below average temperatures during the period.

“This is associated with an increased risk of cold weather impacts in this early part of the winter.”

The below graph shows observations between 1981 and 2010 – with the 2016 outlook looking to be much more cooler. It shows this winter could be the coldest for 35 years. 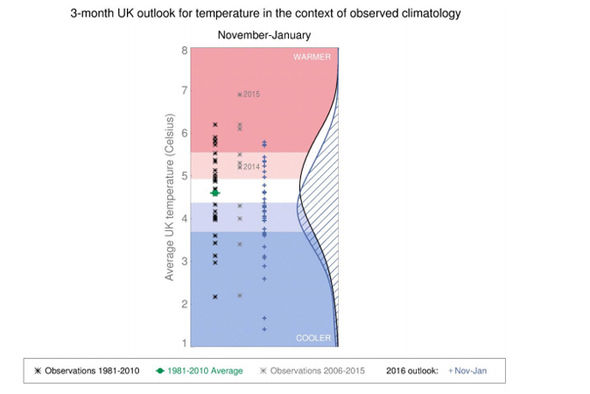 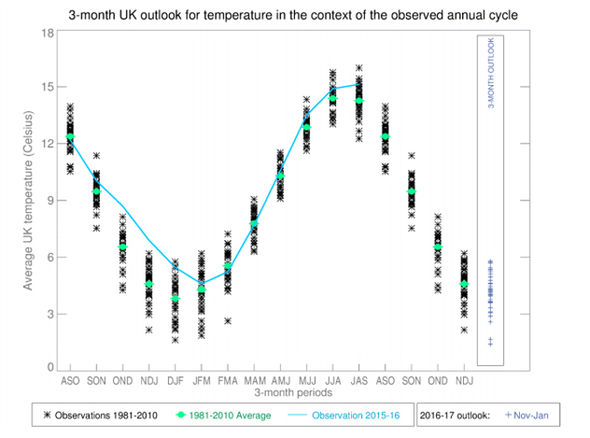 In the shorter term chilly temperatures and the winter’s first frosts are expected at the beginning of this week, with some areas experiencing hail and even light falls of snow.

The polar vortex is a system of high-altitude winds which spin around the North Pole and keep cold air trapped in the Arctic.

However, their pattern of flow can be disrupted by changes to the global weather system, forcing them to divert south with disastrous consequences.

In early 2014 temperatures across Canada and the US fell to -37C, freezing over rivers and causing travel chaos due to a change in the polar vortex.

And whilst the chill is not expected to be nearly so drastic in the UK, experts are still warning people to prepare themselves and not get caught out by the icy conditions.

Pensioners and the young are particularly vulnerable when the mercury plunges and families are being urged to take extra care.

National Federation of Occupational Pensioners chief executive Malcolm Booth said: “After recent mild winters, people must take care not to be caught off guard by much colder conditions predicted this winter.”