In a spectacular climate alarmist policy failure the EU dumped its “carbon neutrality by 2050” commitment and targets driven by the sacred but highly arbitrary and unsubstantiated 1.5 degree C global temperature “limit” and ended its Brussels summit with no climate commitments or targets for year 2050.

The EU heavy weight Germany along with other Eastern European countries including Poland, Hungary and Czech Republic refused to agree to any climate commitments or targets for year 2050 which had been expected to occur at this highly touted EU summit meeting.

Germany is facing huge economic along with energy supply and reliability problems as a consequence of trying to implement its incredibly costly “Energiewende” transition plan to “green energy” as highlighted in a WUWT article which noted:

“The cost of Germany’s “Energiewende” (energy transition) is enormous: some 200 billion euros by 2015 – and yet with minimal reduction in CO2 emission. In fact, coal consumption and CO2 emissions have been stable or risen slightly the last seven to ten years. In the absence of a miracle, Germany will not be able to fulfill its self-imposed climate commitments, not by 2020, nor by 2030.

What applies to Germany also applies to other countries that now produce their electricity primarily with fossil or nuclear power plants. To reach development comparable to Germany’s, such countries will be able to replace only about one quarter of their fossil and nuclear power, because these power plants must remain in operation to ensure frequency regulation, balance and back-up power.”

The same article also described the nightmare scenario of Germany trying to meet its 2050 renewable energy objectives as follows:

“To fulfill the German target of getting 60% of their total energy consumption from renewables by 2050, they must multiply the current power production from solar and wind by a factor of 15. They must also expand their output from conventional power plants by an equal amount, to balance and backup the intermittent renewable energy. Germany might import some of this balancing power, but even then the scale of this endeavor is enormous.

Perhaps more important, the amount of land, concrete, steel, copper, rare earth metals, lithium, cadmium, hydrocarbon-based composites and other raw materials required to do this is astronomical. None of those materials is renewable, and none can be extracted, processed and manufactured into wind, solar or fossil power plants without fossil fuels. This is simply not sustainable or ecological.

Construction of solar and wind “farms” has already caused massive devastation to Germany’s wildlife habitats, farmlands, ancient forests and historic villages. Even today, the northern part of Germany looks like a single enormous wind farm. Multiplying today’s wind power capacity by a factor 10 or 15 means a 200 meter high (650 foot tall) turbine must be installed every 1.5 km (every mile) across the entire country, within cities, on land, on mountains and in water.

In reality, it is virtually impossible to increase production by a factor of 15, as promised by the plans.”

Another WUWT article addressed the extremely high costs associated with the unrealistic push to excessive levels of renewable energy noting:

“Germany is an interesting case, because it has been the poster child in the crazy war on fossil fuels. Note how they’ve been shuttering their nuclear plants. In doing so they’ve raised their renewable use to 14%. However, it’s gotten to the point where the German people are getting tired of the push for renewables, which has driven the energy prices through the roof.”

“The pattern is clear—the more installed renewable energy capacity a country has, the higher the electricity price.” 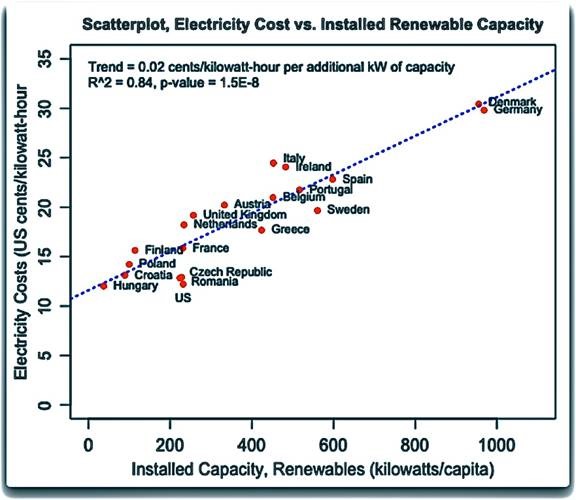 As the graph documents both Germany and Denmark have driven their electricity prices to the highest in the world at about 2.5 times higher than in the U.S. because of excessive and unrealistic government mandates for renewable energy use. 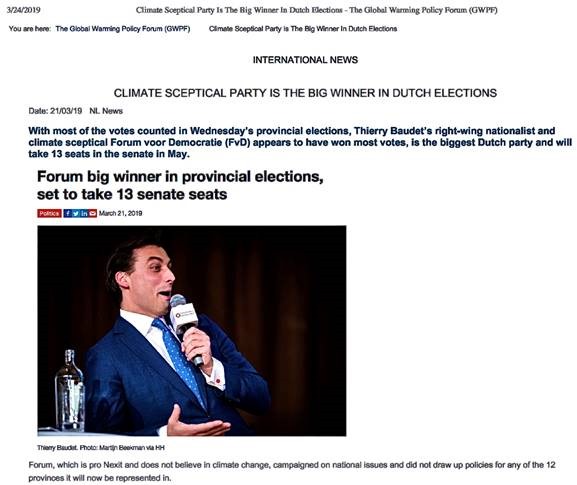 These events are a clear signal and victory for energy reality versus scientifically unsupported climate alarmism propaganda policy.