By Charles Rotter via WUWT 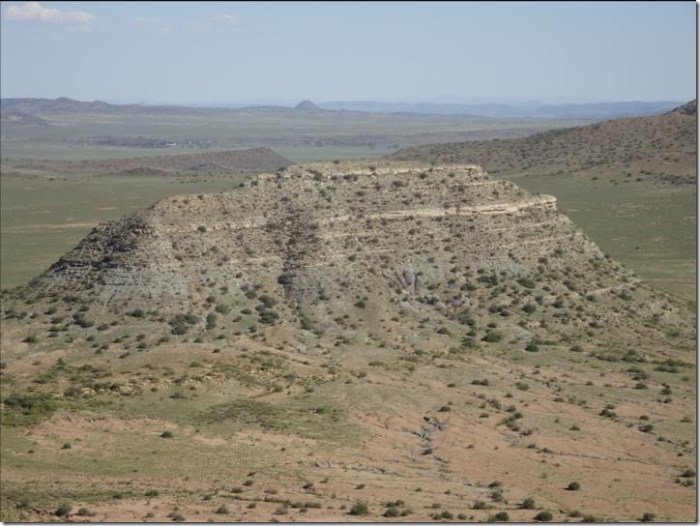 Researchers dated ash deposits from this hill, called a koppie in South Africa. The lower part of koppie Loskop exposes strata from before the end-Permian extinction (Palingkloof Member of the Balfour Formation), while the upper part contains layers deposited after the extinction (Katberg Formation). Credit: Photo courtesy of John Geissman

The mass extinction at the end of the Permian Peri od 252 million years ago — one of the great turnovers of life on Earth — appears to have played out differently and at different times on land and in the sea, according to newly redated fossils beds from South Africa and Australia.

New ages for fossilized vertebrates that lived just after the demise of the fauna that dominated the late Permian show that the ecosystem changes began hundreds of thousands of years earlier on land than in the sea, eventually resulting in the demise of up to 70% of terrestrial vertebrate species. The later marine extinction, in which nearly 95% of ocean species disappeared, may have occurred over the time span of tens of thousands of years.

“Most people thought that the terrestrial collapse started at the same time as the marine collapse, and that it happened at the same time in the Southern Hemisphere and in the Northern Hemisphere,” said paleobotanist Cindy Looy, University of California, Berkeley, associate professor of integrative biology. “The fact that the big changes were not synchronous in the Northern and Southern hemispheres has a big effect on hypotheses for what caused the extinction. An extinction in the ocean does not, per se, have to have the same cause or mechanism as an extinction that happened on land.”

Members of Looy’s lab have conducted experiments on living plants to determine whether a collapse of Earth’s protective ozone layer may have irradiated and wiped out plant species. Other global changes — a warming climate, a rise in carbon dioxide in the atmosphere and an increase in ocean acidification — also occurred around the end of the Permian period and the beginning of the Triassic and likely contributed.

On land, the end-Permian extinction of vertebrates is best documented in Gondwana, the southern half of the supercontinent known as Pangea that eventually separated into the continents we know today as Antarctica, Africa, South America and Australia. There, in the South African Karoo Basin, populations of large herbivores, or plant eaters, shifted from the Daptocephalus assemblage to the Lystrosaurus assemblage. These groups are now extinct.

In the ocean, the extinction is best documented in the Northern Hemisphere, in particular by Chinese fossils. The end-Permian extinction is perhaps best associated with the demise of trilobites.

To improve on previous dates for the land extinction, an international team of scientists, including Looy, conducted uranium-lead dating of zircon crystals in a well-preserved volcanic ash deposit from the Karoo Basin. Looy, who is also a curator of paleobotany at the campus’s Museum of Paleontology and curator of gymnosperms at the University and Jepson Herbaria, confirmed that sediments from several meters above the dated layer were devoid of Glossopteris pollen, evidence that these seed ferns, which used to dominate late Permian Gondwanan floras, became extinct around that time.

At 252.24 million years old, the zircons — microscopic silicate crystals that form in rising magma inside volcanoes and are spewed into the atmosphere during eruptions — are 300,000 years older than dates obtained for the confirmed Permian-Triassic (P-T) boundary in China. This means that the sediment layer assumed to contain the P-T boundary in South Africa was actually at least 300,000 years too old.

Dates for an ash deposit in Australia, just above the layers that document the initial plant extinction, similarly came in almost 400,000 years older than thought. That work was published in January by Christopher Fielding and colleagues at the University of Nebraska in Lincoln.

“The Karoo Basin is the poster child for the end-Permian vertebrate turnover, but until recently, it was not well-dated,” Looy said. “Our new zircon date shows that the base of the Lystrosaurus zone predates the marine extinction with several hundred thousand years, similar to the pattern in Australia. This means that both the floral and faunal turnover in Gondwana is out of sync with the Northern Hemisphere marine biotic crisis.

“For some years now, we have known that — in contrast to the marine mass extinction — the pulses of disturbance of life on land continued deep into the Triassic Period. But that the start of the terrestrial turnover happened so long before the marine extinction was a surprise.”

In their paper, Looy and an international team of colleagues concluded “that greater consideration should be given to a more gradual, complex, and nuanced transition of terrestrial ecosystems during the Changhsingian (the last part of the Permian) and, possibly, the early Triassic.”

Looy and colleagues published their findings March 19 in the open access journal Nature Communications. Her co-authors are Robert Gastaldo of Colby College in Maine; Sandra Kamo of the University of Toronto in Ontario; Johann Neveling of the Council for Geosciences in Pretoria, South Africa; John Geissman of the University of Texas in Dallas and Anna Martini of Amherst College in Massachusetts. The research was funded by the National Science Foundation. 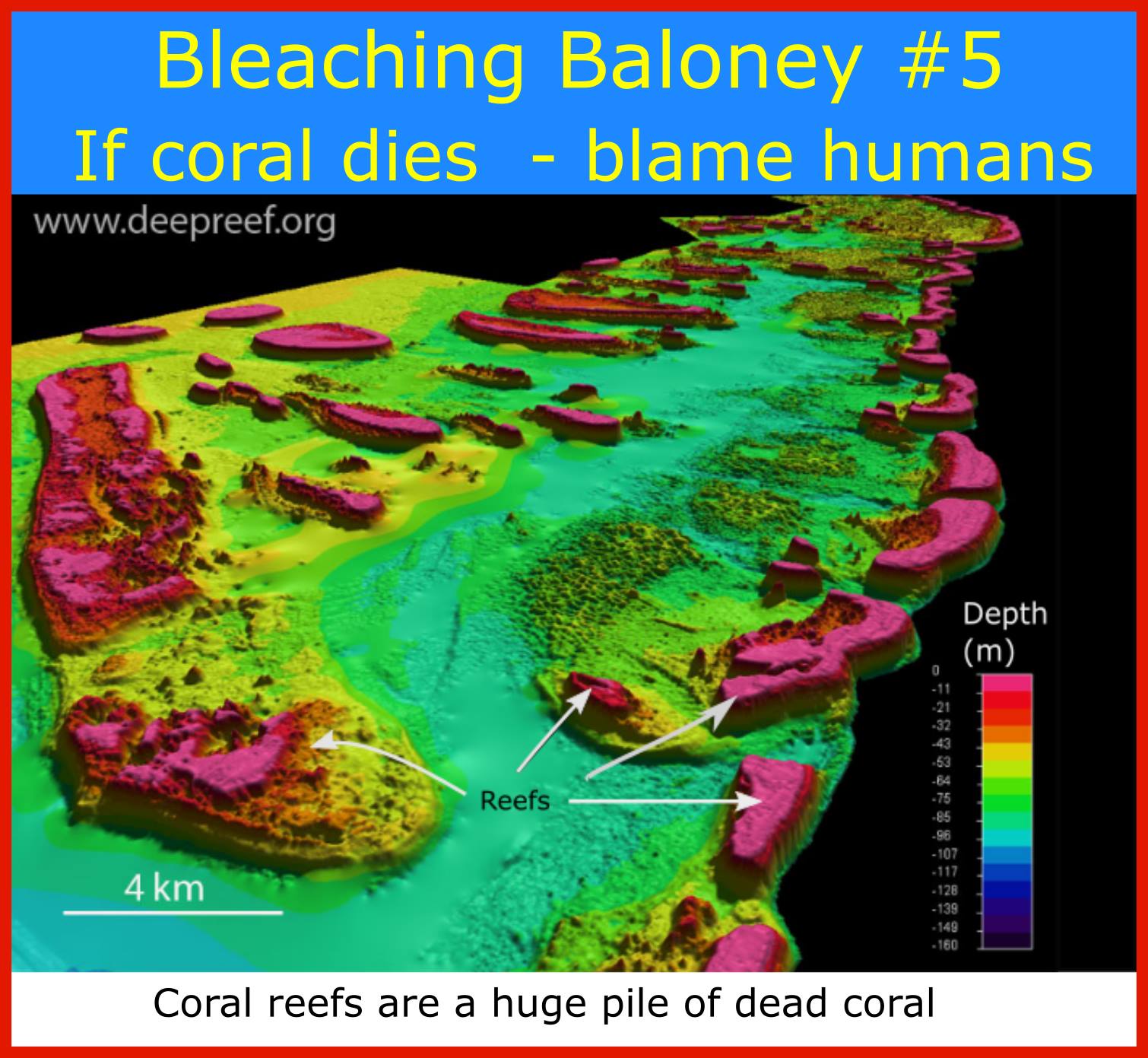 If corals die, there will usually be a scientist eager to say it is unnatural. The coral was murdered by humans – somehow or other. In fact, corals rarely die of old age – something kills them, and usually a huge amount of coral dies in one hit. This always makes a good picture for the media.

Cyclones are the big killer – large waves smash the delicate plate and staghorn corals and often roll over the big “massive” corals. They can destroy a reef in a few hours. Starfish plagues can eat most of the coral on a reef in a year, and bleaching occasionally kills the coral in a few weeks.
All these phenomena are totally natural, but all are now claimed by scientists to be at least partially man-made. Bleaching is from climate change, which also supposedly causes more cyclones, and crown of thorns starfish plagues are from farmers. There are very few other ways that coral dies, so the scientists can always blame mankind.

What is forgotten in this argument is that coral reefs are flat-topped underwater hills made of DEAD CORAL. They are about 50-100 m high and a few kilometres across. The picture shows these “hills” on the almost flat seabed of the Queensland coast. Corals literally grow on the bodies of their dead ancestors. They must die to form a reef.

And mass coral death is like bushfires on the Australian mainland. It is a NECESSARY event that will “reset” the ecosystem. Without the mass events, there would be a different species assemblage. The GBR has formed over aeons with these massive mortality events. They happened before Captain Cook ran aground on the GBR when he explored the east coast of Australia in 1770, and there is no good evidence to suggest that the reef is any different today.