DUBAI, United Arab Emirates — The world was shocked this week by horrifying scenes of desperate Afghans swarming the tarmac at Kabul’s international airport, grasping at their last chance to escape a country now completely overrun by the Taliban.

After nearly two decades of war, more than 6,000 American lives lost, over 100,000 Afghans killed and more than $2 trillion spent by the U.S., the outlook for the country’s future was still grim, with regional experts assuming the Taliban would ultimately come to control most of Afghanistan once again.

But few expected a takeover this swift, with so little resistance from the Afghan government and Afghan National Army, the latter of which was funded and trained with $89 billion from the U.S. taxpayer.

“While the end result and bloodletting once we left was never in doubt, the speed of collapse is unreal,” one former intelligence official and U.S. Marine who served in Afghanistan told CNBC, requesting anonymity due to professional restrictions.

“Why were the Taliban able to so quickly take over? This is a masterpiece, frankly, operationally,” Michael Zacchea, a retired U.S. Marine who led an American-trained Iraqi Army battalion during the Iraq War, told CNBC. “Why were they able to take the country faster than we did in 2001?”

The question has been asked by Americans, Afghans, military veterans and international observers alike — and the answer, much like the Afghanistan conflict itself, is complex, multilayered and tragic.

One year after Afghan war, Biden struggles to find footing 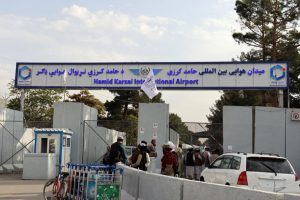 The 12 months since the chaotic end to the U.S. war in Afghanistan haven’t been easy for Joe Biden.

The new president was flying high early in the summer of 2021, the American electorate largely approving of Biden’s performance and giving him high marks for his handling of the economy and the coronavirus pandemic.

But come August, the messy U.S. troop withdrawal from Afghanistan seemed to mark the start of things going sideways for him.

It was a disquieting bookend to the 20-year American war: the U.S.-backed Afghan government collapsed, a grisly bombing killed 13 U.S. troops and 170 others, and thousands of desperate Afghans descended on Kabul’s airport in search of a way out before the final U.S. cargo planes departed over the Hindu Kush.

The disastrous drawdown was, at the time, the biggest crisis that the relatively new administration had faced. It left sharp questions about Biden and his team’s competence and experience — the twin pillars central to his campaign for the White House.

As the one-year anniversary of the end of the Afghan war nears, the episode — a turning point in Biden’s presidency — continues to resonate as he struggles to shake dismal polling numbers and lift American confidence in his administration ahead of November’s critical midterm elections.

“It was a pivotal moment that he hasn’t ever really recovered from,” said Christopher Borick, director of the Institute of Public Opinion at Muhlenberg College in Pennsylvania. “Things were going really well in terms of how voters viewed him in terms of bringing stability to the economy and how the government addressed the pandemic, issues that are higher priorities to the American electorate than the war in Afghanistan. But Afghanistan cracked that image of competency, and he hasn’t ever really been able to repair it.”