No matter how undemocratic, sparsely-populated, or terrorism-promoting a nation happens to be, a sentence written by scientists will not survive if that nation objects.

In South Korea a few weeks ago, the Intergovernmental Panel for Climate Change (IPCC) held a multi-day meeting.

It was closed to the media, but these two photos – from the IPCC’s Flickr photostream – were taken at similar events in 2013 and 2014: 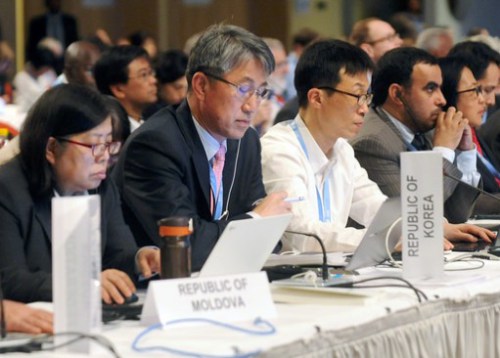 If you click through to the full sized images you’ll have no difficulty seeing that each person seated at these tables is associated with a country.

In the top photo, there’s a spot for the representative from Sierra Leone – an impoverished African nation of six million people that has the world’s highest rate, by far, of pregnancy-related deaths.

UN peacekeepers only departed Sierra Leone in 2005. In 2017, when students protested a professors’ strike, sparked by the fact that the government had stopped paying their salaries, police opened fire with live ammunition.

Next to Sierra Leone is Seychelles, an island nation in the Indian Ocean inhabited by a mere 95,000 people.

In the second photo, we see a representative of Qatar, a country of 2.3 million that has been ruled by the same family since the mid-1800s.

This is a dictatorship in which citizens have no right to establish political parties or choose their own rulers. In 2017, four nearby nations severed ties with Qatar, accusing it of sponsoring terrorism.

The IPCC is a UN body. Therefore every UN-recognized country – no matter how small, mismanaged, undemocratic, or terrorism-promoting – is entitled to participate in IPCC meetings.

Instead of focusing their limited human capital on solving problems at home, these countries send personnel to such meetings whenever a new climate report is being finalized.

Each paragraph of a Summary of a much longer document gets projected onto large screens. The Summary has been written by scientists.

But in IPCC land it’s only a draft, totally lacking in official standing until people like the ones in these photographs provide their blessing.

These people have diplomatic, rather than scientific, standing. They are political operatives. Many of them are the hand-picked representatives of horrendously repressive regimes.

No matter how undemocratic or sparsely populated these nations happen to be, a sentence written by scientists will not survive if an individual seated at one of these tables objects.

Upon their insistence, that sentence will be truncated, re-written, or removed entirely.

At the recent meeting in South Korea, the judgment of a room full of people such as these overrode the judgment of the 90+ scientists who had spent more than a year authoring and revising the IPCC’s latest 1,200-page report.