London, IRNA – While Iran’s response to latest Vienna agreement draft was logical according to EU officials, reaching the end line, and final agreement depends on White House decision, which is delayed.

Despite its assertions that negotiation is the best course of action in dealing with Iran and that the restoration of the JCPOA is a priority, the United States is still analyzing Iran’s written answer three days after it was submitted in response to the EU’s proposed language.

Ned Price, the spokesperson for the White House, stated at a press conference yesterday that the US is engaging with the EU and its partners there about the way forward.

“For the moment, we are studying it and we are consulting with the other JCPOA participants and the U.S. on the way forward,” an EU spokesperson told reporters in Brussels, referring to the nuclear deal by the official abbreviation JCPOA.

According to the White House spokesman, the president is aware that Congress is a potential partner in a nuclear agreement, which is why the White House consults and communicates directly with them.

Following Tehran’s request for Washington to be flexible, the European Union and the United States said on Tuesday that they were examining Iran’s answer to what they have dubbed their “final” proposal to rescue the 2015 nuclear deal.

After hearing Tehran’s responses from the EU, a representative for the US State Department said the US was discussing its opinions on Iran’s answer with the group.

An EU spokesperson told reporters in Brussels that they were “studying it” and “talking with the other JCPOA members and the U.S. on the way forward,” using the official acronym JCPOA for the nuclear agreement.

In an effort to keep the 2015 nuclear agreement from completely disintegrating and avert a fresh crisis, the EU has stated that it is examining Iran’s response to a draft agreement designed to save the agreement. 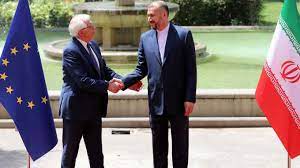 Late on Monday, the EU got Tehran’s response to the draft. An EU official stated, “We are studying it and are discussing with the other JCPOA [nuclear agreement] participants and the US on the next steps.” The paper, which Iran and the US examined during unofficial negotiations in Vienna this month, has been referred to by EU officials as the “final text.”

The negotiations to reach a compromise in which the US agrees to rejoin the agreement and lift the sanctions against Iran in exchange for Tehran dramatically curtailing its nuclear program have shown some signs of progress, according to analysts and officials. But after 16 months of negotiations, which were mediated by the EU and frequently failed because the key parties blamed one another for impasses, there were still unresolved issues.