Newly-recruited Israeli paratroopers attend a graduation ceremony, marking the end of their period as trainee soldiers and preparing for an operational activity, at the end of a 50-kilometer 12-hour hike in full combat gear on Ammunition Hill in Jerusalem  (November 11 in Manila). AFP PHOTO 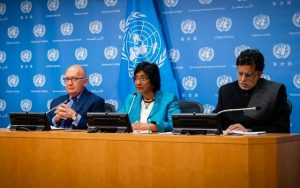 “We as Palestinian journalists are subjected to not just abuse and violations, but a wide-scale war by the occupying state.”

Speaking to a high-level team of UN investigators, he said nearly 50 Palestinian journalists have been killed doing their work since 2000 and “no one was held accountable”. He pointed to the case of Abu Akleh, a veteran Al Jazeera reporter who was wearing a bulletproof vest marked “Press” and a helmet when she was shot in the head during an army operation in Jenin refugee camp, in the Israeli-occupied West Bank, on May 11.