Migrants on the deck of the Rise Above rescue ship run by the German organization Mission Lifeline, in the Mediterranean Sea off the coasts of Sicily, southern Italy, Sunday, Nov. 6, 2022. Italy allowed one rescue ship, the German run Humanity 1, to enter the Sicilian port and begin disembarking minors, but refused to respond to requests for safe harbor from three other ships carrying 900 more people in nearby waters. (Severine Kpoti/Mission Lifeline Via AP)

The weeks-long impasse between the far-right-led Italian government and relief organizations in charge of rescue ships partially eased on Tuesday when officials permitted all of the migrants still aboard two rescue ships to dock. But after more than two weeks of silence from Italy, a ship carrying 234 rescued migrants who were still at sea pleaded with France to offer it a safe harbor.

Italian authorities are allowing migrants they had previously deemed “not vulnerable” to disembark on the Doctors without Borders-operated Geo Barents in the Sicilian port of Catania. That comes after earlier in the day, all 89 migrants aboard a rescue ship operated by Germany were permitted to disembark on the Italian mainland.

Italy determined that 35 migrants who were saved at sea on the Humanity 1 ship were not vulnerable and forbade them for days from disembarking. That’s despite objections from the relief organization and experts who assert that under international law, every person found in difficulty at sea is entitled to the nearest safe port.

Hundreds more migrants have been allowed to disembark from one of four boats Italy had blocked from docking. The move brings an apparent end to the days-long saga after about 500 migrants were held offshore by authorities.

Three people have leapt from a migrant rescue boat where they were being held after being refused permission to disembark in Italy, the BBC has been told. 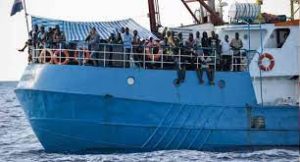 The three were among about 250 migrants refused permission to disembark after officials deemed them “healthy”.