The Islamic Republic has always cultivated a reservoir of devoted female support.

On July 12, a ceremony in honor of Hijab and Chastity Day, a festival created by Iran’s Islamic dictatorship, was performed in Tehran by more than a dozen ladies wearing long green headscarves and flowing white robes. As a narrator in a black chador recounted Quranic passages emphasizing the value of women being covered, they spun about with their arms raised. Part of the purpose of the choreography and narration was to warn and threaten those who opposed the Islamic authority at home.

Nevertheless, a group of Iranians started an internet campaign named “No2Hijab” to mock the performance. Iranians suggested that Margaret Atwood, the author of the dystopian novel The Handmaid’s Tale, which depicts a misogynist state that viciously discriminates against women and recruits other women into its program of systemic sexism, draw inspiration from Iran for her upcoming book in one thread.

RELATED: I am free while the women of Iran are not afforded the same luxury – but now they are spearheading a revolution

There should be no mistake about what this fight is for. It is a fight against a theocratic regime which denies the most basic human rights I am a free woman. It’s a luxury not afforded to the women of my motherland, Iran. As an Australian with Kurdish Iranian heritage, the past six weeks have been a whirlwind of emotion. A cocktail of fear, grief, guilt, pride and hope.

The widespread demonstrations that have gripped Iran since Mahsa Amini, 22, died in September after being jailed for wearing her hijab inappropriately, have increased attention to the nation’s state-sanctioned misogyny. Since then, women in Iran who are fighting for their rights have not given up despite oppression. But what frequently goes unnoticed is how the regime’s misogyny is still supported and encouraged by its female agents. The regime’s female spies and diplomats have long played a role in maintaining the nation’s social pressure and culture of terror.

To participate in the Iran-Iraq War, the former ayatollah Ruhollah Khomeini directed the creation of the Basij, a citizen militia that is currently an internal division of the Islamic Revolutionary Guard Corps. He also founded a branch known as the “Sisters’ Basij” or Basij-e Khaharan in the 1980s to provide supplies to soldiers engaged in the Iran-Iraq War and to care for the injured. The Basij was left standing after the battle. In order to maintain social order in favor of the dictatorship, both men and women from the Basij infiltrated numerous state and social structures—often using force. In every aspect of society, the Sisters’ Basij women had a strong foothold, serving as professors in colleges and universities, researchers in think tanks, and more. 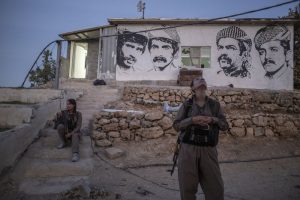 The Kurds have been a lightning rod for the regime’s crackdown on dissent for years, but now they have galvanized opposition to the Islamic Republic.

The Sisters’ Basij women were firmly established in every aspect of society, serving as professors in colleges and universities, researchers in think tanks, and law enforcement officers in guidance patrols, often known as the morality police. According to some estimates, 10 out of 25 million Basijis—including reservists—are female. According to reports, the Sisters’ Basij manage 100,000 “virtuous circles,” or “virtuous circles,” and 20,000 bases throughout Iran to propagate the regime’s view of what constitutes a devout Muslim woman.