It was advertised as a surprise fashion show, but it caught everyone off guard more than they anticipated. Kanye West had a “secret” catwalk event during Paris Fashion Week that featured a T-shirt with the phrase “White Lives Matter.”

Models on the catwalk and Ye, as West prefers to be called, along with right-wing commentator Candace Owens, a guest at the show, both wore the shirt, which had a picture of Pope John Paul II on the front.

Ye said to the audience before the Yeezy Season 9 show started: “Everyone here understands that I am the leader… you can’t handle me. The issue is out of control.

He continued by making mention of his ex-wife Kim Kardashian’s 2016 Paris robbery, his former manager Scooter Braun, and his most recent dispute with Gap. While Naomi Campbell modeled for the exhibition, she refrained from donning the contentious T-shirt. A children’s choir that performed at the occasion was directed by the rapper’s daughter, North West.

The term White Lives Matter, which reframes the Black Lives Matter expression used to protest against brutality, is classified as a hate statement by the Anti-Defamation League.

Ye has already said offensive things about racial issues. 400 years of slavery in the US “seems like a decision,” he claimed in 2018, but he later tried to walk back the remark.

Ye’s partnerships with Gap and Adidas recently came to an abrupt end, and the presentation marked his comeback to high fashion. Ye ended a two-year relationship with Gap in September, claiming the retailer had broken the conditions of the agreement.

Since then, he has criticized Gap for charging $200 for the T-shirts. Ye declared his desire to leave Adidas in the same month, saying, “It’s time for me to go it alone.” A previous Yeezy event in New York in 2016 drew criticism for forcing models to stand for extended periods of time without access to drink or shade. One model passed out before the event was finished, and it started two hours late on the grounds of Roosevelt Island.

Ye made his debut as a fashion designer in Paris in 2011, and this was his fourth fashion presentation there. When he accepted an internship at Fendi in 2008, his fashion career officially got underway. The following year, he attended his first Paris Fashion Week.

Ye stated, “Paris is the high cathedral of fashion,” to Vogue Business. I’ll put on my hoodie, order an Uber, and head over to Future’s house if I’m performing rap songs. Every day. And if we’re developing clothing? Paris.” 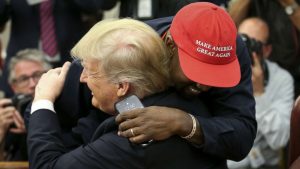