Pack as many winter jumpers as you can and chances are you’ll still be shivering in this Siberian town, where residents have adapted to ice cold temperatures of -50°C

Think you struggle in the February frost? It’s nothing on the sub-zero temperatures in this town.

The climate in this settlement in the midst of the Siberian wilderness is generally considered to be the most brutal on Earth.

Residents in the town of Oymyakon holds the accolade of being the coldest place survivable. 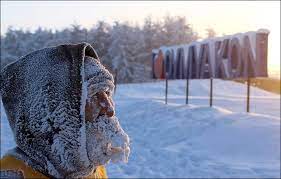 The town in the Siberian region of Sakha, Russia, regularly sees temperatures drop below -50C but has seen the mercury drop as far as -71C.

Currently, the coldest point on the planet is in Antarctica with a record low of -94C (although scientists estimate they have plunged lower) – but while, thankfully, nobody lives there, life in Oymyakon isn’t a great deal cosier.

Only 700m above sea level and a few hundred miles south of the Arctic circle, you wouldn’t expect Oymyakon so numbingly cold. Instead, its remote location miles from any ocean and deep in a valley locks it into a freezing desert in wintertime.

Local legend has it it that when God was creating the Earth, His hands became so cold moving around the ice, He dropped it all in Oymyakon.

Cars are covered in jackets while some engines are left running overnight to keep them working. People’s glasses become stuck to their face and even things like pens cease to work as the ink freezes, making school life tough. 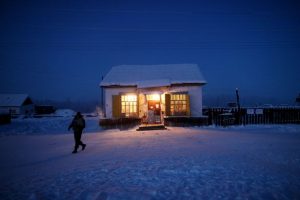 Visitors to Oymyakon must be prepared to drive for days along the ‘Road of Bones’ to get to Oymyakon, a highway built under Josef Stalin’s rule which was so-called due to the slave labour that went into constructing it in adverse conditions, resulting in thousands of deaths.

Upon arrival you will be presented with a certificate from the town’s ‘keeper of the cold’ to show you have been.

And a good thing too – because the routine souvenir selfie may not be possible when you find out your phone camera lens can freeze over.

The seriously brave and hardy can also dip their toes into the town’s favourite pastime – bathing in the bitterly cold river. No thanks.