On Thursday, a former police officer who was under investigation for drug use stormed into a daycare center in Thailand, killing scores of toddlers and teachers before opening fire as he ran away. The bloodiest shooting rampage in American history claimed at least 36 lives.
After killing his wife and child at home, the perpetrator, who investigators claim was discharged from the police department this year, committed suicide.

Photos shot by first responders showed the school’s floor covered in small bodies of youngsters who had been having an afternoon nap while still swaddled in their blankets. The pictures showed bloody puddles, bullet wounds to their heads, and cuts to their faces.

A teacher told that the assailant got out of a car and immediately shot a man eating lunch outside, then fired more shots. When the attacker paused to reload, the teacher had an opportunity to run inside.

One of Thailand’s poorest provinces, Nongbua Lamphu, is located in the northeast and contains the rural town of Uthai Sawan.

Another witness claimed the daycare workers had shut the entrance, but the shooter managed to shoot his way inside.

“The teacher who died, she had a child in her arms,” a witness, whose name wasn’t given, told Thailand’s Kom Chad Luek television at the scene. “I didn’t think he would kill children, but he shot at the door and shot right through it.”

According to police spokeswoman Archayon Kraithong, at least 10 individuals were hurt, six of them seriously.

Rescuers were seen running into the one-story structure beyond the broken front door on camera captured by a first responder who arrived on the site. There were blood drops on the floor in the entranceway.

An photograph of a room with a bloody floor and sleeping mats scattered about was released online following the incident, and worried family members could be heard sobbing outside the daycare center. The walls were decorated with bright pictures of the alphabet and other objects.

The shooter was identified by police as Panya Kamrap, a 34-year-old ex-police officer. Police Maj. Gen. Paisal Luesomboon stated that Panya’s dismissal from the force was due to drug-related charges.

The man, who had been a sergeant, was scheduled to appear in court on Friday for a hearing in a methamphetamine case, according to a Facebook post by Thai police commander Gen. Dumrongsak Kittiprapas. He also suggested that the man may have picked the daycare center because it was close to his house.

Dumrongsak had earlier disclosed to reporters that the man’s primary armament was a 9-millimeter pistol that he had bought for himself. Paisal claimed to have a shotgun and a knife in addition. 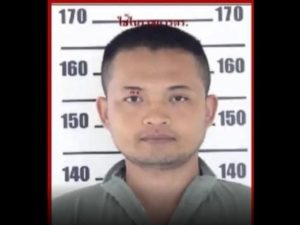 Reporters were informed by Thai Prime Minister Prayuth Chan-ocha, who intended to visit the area on Friday, that the former officer was reportedly experiencing personal issues.

“This shouldn’t happen,” the prime minister said. “I feel deep sadness toward the victims and their relatives.”

At least 22 children and two adults were killed at the daycare center, according to the police, who have not yet provided a complete breakdown of the death toll. Two additional kids were slain elsewhere, at least.

With 15.1 firearms per 100 persons, Thailand has one of the highest rates of civilian gun ownership in Asia, compared to 0.3 in Singapore and 0.25 in Japan.

According to a 2017 study by Australian nonprofit organization Gun-Policy.org, that is still far less than the U.S. rate of 120.5 per 100 people.

The previous worst mass shooting in the nation occurred in 2020 when a disgruntled soldier opened fire in and around a mall in the northeastern city of Nakhon Ratchasima, killing 29 people while eluding capture for about 16 hours.

In that incident, there were close to 60 other casualties. The blast at a Bangkok shrine in 2015 that killed 20 people was the previous worst attack on civilians, but this death toll topped it. The suspected perpetrators were human traffickers who were angry about a crackdown on their network.

A clerk at Thailand’s Army War College in Bangkok is accused of shooting coworkers last month, killing two and injuring another before being caught.