The protests in Brazil continue as some of the crooks behind the steal sneek off to New York.

Brazilians are chanting in huge rallies for Lula to go. Below is part of the public that was at the Interlagos Gp of Formula 1 on Sunday (Nov. 13, 2022) who protested against president-elect Luiz Inácio lula da Silva (PT). Videos circulating on social networks show the moment when the audience shouts “Lula thief his place is in prison”.

In the video below, the Head of the Brazilian Superior Electoral Court is confronted in New York City.

The president of the Brazilian Superior Electoral Court, Alexandre de Moraes, feels uncomfortable with a Brazilian protester while having dinner in a restaurant in New York City.
pic.twitter.com/sOR7MQO7fw

RELATED: The People of Brazil, Military, Continue to Work Together, Overcome, Stolen Election 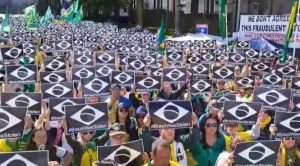 The people of Brazil and the military are working together to overcome the stolen election by the communist Lula and his gang.