Screenshots emerged this week showing the Florida Republican’s account would not autocomplete in search results. In a statement to Breitbart News, the lawmaker’s office said it was “investigating the depths and impact,” of the serious allegations.

A spokesperson for the Trump ally said:

It is curious that these allegations would arise the week following Congressman Gaetz’s heated exchange with Twitter senior executives before the House Judiciary Committee. Congressman Gaetz continues to believe that interactive computer services, such as Twitter, should not discriminate against content while simultaneously asserting that they are a nonbiased public forum under federal law.

Insanity. *Both* of @MattGaetz’s accounts have been taken out of not just the autocomplete but won’t even register when properly tagged. @RepMattGaetz

You can spell or misspell one of the most newsworthy Congressmen in the country and nothing comes up.

See screenshot above and below.

A representative for Twitter pushed back against reports the Silicon Valley behemoth shadowbans users and told Breitbart News it was enacting a solution to fix the Trump ally’s search results. “As we have said before, we do not shadowban. We are aware that some accounts are not automatically populating in our search box, and [are] shipping a change to address this,” said Twitter. “The profiles, Tweets and discussions about these accounts do appear when you search for them.”

The Republican Party chair Ronna McDaniel, several conservative Republican congressmen, and Donald Trump Jr.’s spokesman no longer appear in the auto-populated drop-down search box on Twitter, VICE News has learned. It’s a shift that diminishes their reach on the platform — and it’s the same one being deployed against prominent racists to limit their visibility. The profiles continue to appear when conducting a full search, but not in the more convenient and visible drop-down bar. (The accounts appear to also populate if you already follow the person.)

A Twitter spokesperson told Vice its algorithms were not developed to discriminate against specific political ideologies or beliefs. “We are aware that some accounts are not automatically populating in our search box and shipping a change to address this,” the representative told Thompson. “I’d emphasize that our technology is based on account *behavior* not the content of Tweets.”

Gaetz this week raised the prospected that Twitter may have illegal campaign contributions to his political opponents by “prejudicing against [his] content.”

“The evidence is piling up that I am being treated differently on Twitter than people on the political Left and I don’t like that because I enjoy the Twitter platform, I enjoy the engagement, I enjoy the candor,” the Florida Republican told the Daily Caller. “I would think that having won my election with 69 percent of the vote to serve in the Congress that the marketplace of ideas could accommodate my views.”

Appearing on the Fox News Channel’s Tucker Carlson Tonight, the freshman lawmaker confirmed to host Tucker Carlson that an FEC complaint was officially filed against Twitter.

“I’m certain there were only four members of Congress who had their voices suppressed on Twitter: Matt Gaetz, Jim Jordan Mark Meadows, and Devin Nunes,” the lawmaker began. “My suspicion is if people were effetely communicating a conservative message, they got caught in Twitter’s troll trap.” The Trump ally also told Carlson he believes the agency has the power to take appropriate action against the social networking giant. The FEC can “absolutely then institute fines, just like they can institute fines and punish against any company that illegally makes a corporate donation to a political campaign,” Gaetz told Tucker.

Twitter on Thursday provided angry users a perplexing explanation as to why conservatives are experiencing censorship on the increasingly broken platform. “We do not shadow ban,” the Silicon Valley giant declared at the start of a blog post published by Twitter’s Legal, Policy and Trust & Safety Lead Vijaya Gadde and Kayvon Beykpour, the company’s Product Lead.

Rather, they write, Twitter utilizes “ranking models,” taking “many signals into consideration to best organize tweets for timely relevance.” Ranking tweets and search results best optimize what Twitter describes as a healthy conversation – an approach launched in the spring “to improve the health of the public conversation.”

It was apparently our “behavior” that got us treated differently? https://t.co/chciZJLtE9

Sorry @mattgaetz I can’t see you in the shadows…who are you?? https://t.co/0Uh8LI7wcM

Comedic factor aside, President Donald Trump called out Twitter’s practice of shadowbanning and vowed to investigate the matter. “Twitter “SHADOW BANNING” prominent Republicans. Not good. We will look into this discriminatory and illegal practice at once! Many complaints,” the president said.

Twitter “SHADOW BANNING” prominent Republicans. Not good. We will look into this discriminatory and illegal practice at once! Many complaints. 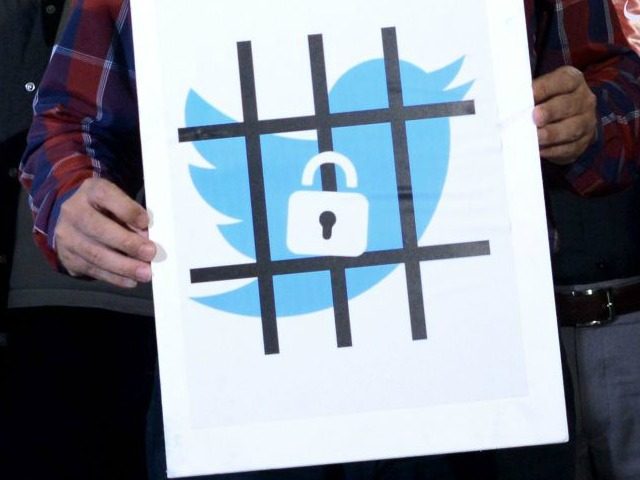 Twitter banned the account of a pro-Trump grassroots campaign with 15 state field directors along with another prominent Trump supporter, failing to reinstate the accounts on the same day that the company came under fire from the president himself for discrimination against conservatives.

Eight days ago, Twitter banned the account of a pro-Trump grassroots organization called New Right US (@newrightus.) Co-founded by political activist Mike Tokes, the account represented an organization that mobilizes Trump supporters around the country.

“We have over 15 state directors and a team of social media influencers throughout the country” said Tokes. “It wasn’t just some website with no action. We were really expanding.”

Because Twitter refuses to be transparent about the reasons it suspends accounts, it did not inform the owners of @newrightus, or Breitbart News, why the account had been suspended. Tokes says the account, which accumulated approximately 10,000 followers prior to its suspension, had not engaged in any rule-violating behavior.

Tokes says Twitter initially restricted the account for seven days, but that “now it shows no option to reactivate, meaning it’s permanent.”

On the same day, Twitter suspended the account of TheALX (@theALX), a pseudonymous Trump supporter who had accumulated approximately 23,000 followers, including influential conservatives like Sean Hannity and Katrina Pierson.

TheALX doesn’t use his real name on Twitter, he says, because he’s a college student from a “very liberal” state, and doesn’t want to jeopardize any educational or professional opportunities over his political views

“They didn’t tell me why I was suspended” TheALX told Breitbart News. “I always am cautious when I Tweet, so I avoid profanity and always fact check before I post.”

TheALX says he had spent two years working on his account prior to its suspension, and now worries about the impact on his career.

“I’m running social media for a conference and an organization and being suspended hurts my ability to network and be recognized in the professional realm of politics” he says. “Twitter is almost necessary for a career involved with politics these days, so I feel like I have been shut out from a potential career that I would be passionate about.”