When FAKE news are projecting (it’s a typical, low IQ leftist thing) .. No news outlet would need “fact checkers” if they hired journalists.

NewsGuard, the browser extension that rates the “trustworthiness” of news outlets, and is run by establishment media figures along with former Clinton, Obama and Bush administration members, warns that Breitbart News is “Fake News” 29 times in one Google search. 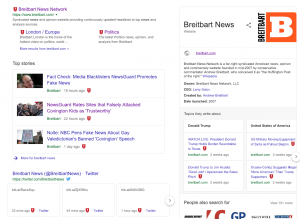 Every tweet from the Breitbart News Twitter account that is featured on the page receives a warning, as do the articles linked in the “Topics they write about” section from Google. Placing the mouse cursor over one of these shield icons reveals a warning from NewsGuard to “proceed with caution” when visiting Breitbart News and claims that the site fails to “gather and present information responsibly.” The warning that NewsGuard attaches to links associated with Breitbart News can be seen below: 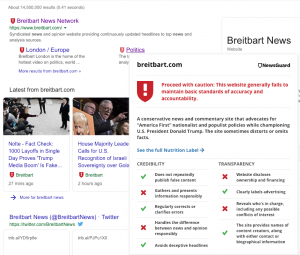 In a recent article, Breitbart News journalist John Nolte took issue with many of the Breitbart articles that NewsGuard cites as examples of “fake news.” These articles included opinion pieces, aggregated articles from social media sites such as Twitter and picks apart technicalities in an attempt to discredit Breitbart News. Nolte gives one example, writing:

Our story, “David Hogg Mocked After Twitter Users See ‘Nazi Salute’ at End of Speech” is attacked by NewsGuard … because we did journalism.

Our scare quotes around “Nazi Salute” is standard practice to convey that we are reporting on the point of view of others, not our own. What’s more, if you read our piece, there is no opinion. It is merely a report to inform readers about something that was happening — you know, the latest news about a public figure.

This is standard practice in journalism.

Nevertheless, NewsGuard complains, “Reporting on this case allowed Breitbart to publish doctored images of Hogg dressed as a Nazi, while place responsibility for the images on ‘Twitter users.’”

Except… We… Didn’t… Publish… Doctored… Images, and even if we had, so what? Those images going viral is news.

Oh, and the far-left Snopes published images similar to the ones we did, and NewsGuard adores Snopes.

So what we have here is a news organization that puts a premium on not reporting stuff it doesn’t like.

NewsGuard also appears to consider completely accurate headlines to be “misleading” despite Breitbart News repeatedly quoting the politicians mentioned in the headline in the body of the article:

Another example is our story titled “Democrats, Establishment Media Push War with Russia.”

About this, NewsGuard attacks us with this deliberately deceptive non sequitur: “[N]one of the people cited in the story advocated the use of military force in response to the election meddling.”

Once again, NewsGuard does not link our piece because to do so would reveal the absurdity in claiming it is misleading. But here it is, and as you can see, the piece is loaded with countless examples of Democrats and the media recklessly accusing Russia of an “act of war.”

Our headline does not say “military action”; it says “war” — a word cited by others on at least a dozen occasions.

NewsGuard is also happy to mischaracterize the writings of other journalists in an attempt to paint Breitbart News in a negative light:

NewsGuard quotes Bouie, who reports in the opening of his piece that “reporters have been trying to find the issue of offense that could fracture Donald Trump’s base of support.”

NewsGuard then complains about Breitbart News but does so by deliberately mischaracterizing what Bouie wrote.

Here’s the Breitbart News piece NewsGuard is scared to link.

Here’s the Bouie piece NewsGuard is scared to link.

And nowhere does Bouie indicate his belief the media are  — as NewsGuard spun it — “trying to figure the limits of his bases political support.”

Rather, Bouie declaratively reports that “reporters have been trying to find the issue or offense that could fracture Donald Trump’s base of support.”

The dictionary defines “fracture” as “break or cause to break,” not as “trying to figure the limits of something.”

While NewsGuard claims to be attempting to hold publications to a higher standard and ensure the accuracy of reporting; NewsGuard appears to actually aim to discredit those critical of establishment politicians and organizations. As Nolte states in his article, FakeNewsGuard would be a much more fitting name for the browser extension that Microsoft appears to think so highly of.

The job of a journalist is to report facts, add context where necessary, and leave it to the consumer to decide what he thinks. In this video, James O’Keefe, founder and president of Project Veritas, explains why fewer and fewer people trust modern-day “journalism.”