One of President Trump’s most fervent supporters, MyPillow CEO Mike Lindell, released on Friday a two-hour video documentary titled “Absolute Proof” presenting the claim that fraud and irregularities affected the outcome of the 2020 election.

It’s available on a website Lindell created and was scheduled for airing on the One America News cable network three times on Friday, at 1 p.m., 4 p.m. and 7 p.m. Eastern time.

“Everyone needs to share it with everyone you know, because anyone that sees it, even if it’s nine Supreme Court justices, everyone will say, ‘Wow, this is an attack on our country,'” Lindell said in an interview Wednesday with The Revival Channel on YouTube.

“Once you guys see what I’ve seen you’re gonna be so excited,” he said.

OAN has put a disclaimer on “Absolute Proof” stating it is paid programing and “opinion only.”

Following threats of a lawsuit, the network, along with Newsmax TV and others, has distanced itself from claims that equipment by Dominion Voting Systems and Smartmatic USA were designed for fraud and were manipulated to steal the election from President Trump.

Dominion Voting Systems has threatened to sue Lindell, and Smartmatic has sued attorneys Rudy Giuliani and Sidney Powell, Fox News and three of its hosts for libel in a $2.7 billion case.

Lindell was in news headlines in January, with a meeting with Trump at the White House, a ban by Twitter and the withdrawal of his products by several major retailers in response to his claims of election fraud. The consumer organization Media Action Network launched a boycott of Bed, Bath & Beyond, which saw its stock plunge 36% in one day of trading last week.

The Rise of the China Party: How the American Elite became Captive to Chinese Money. 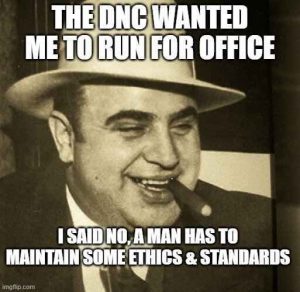