Image: It’s Time to Take the Attack to The Marxists 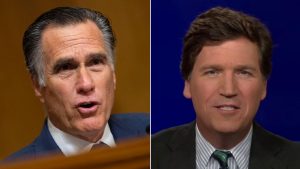 Sen. Mitt Romney is struggling to stay relevant now that he is no longer the go-to guy whenever the media needs to portray bipartisan opposition to former President Donald J. Trump, and despite his growing unpopularity with Republicans, he perseveres in a quest to salvage his image in a nation that rejected him.

The failed presidential candidate who coughed up a winnable election against Barack Obama found a new cause with his bizarre fixation on Trump whom he devoted his life to undermining, first in the 2016 primaries and then after going to Washington as the replacement for retired GOP icon Senator Orrin Hatch.

For the entirety of Trump’s tenure in the White House, the embittered former governor of ultra-liberal Massachusetts pursued his crusade against a man whom he once begged for an endorsement, joining with Democrats on both failed impeachment efforts and now, with Trump gone, Romney is lashing out at Tucker Carlson.

According to Romney, “A prominent TV pundit traveled to Hungary to extol Viktor Orban as a model for us to emulate.”

“Orban censors the media in his country, ignores the will of the people in elections, amasses wealth for himself and his cronies. Hungary is ranked as one of the least free, least democratic countries in the developed world. Hungary, model for America?” Romney said.

The speech, which was delivered to commemorate Constitution Day, was ostensibly about authoritarianism and Romney invoked Cold War overtones to defend “democracy” which in 2021 America, no longer fits the traditional definition with disputed elections, dark money, Democrat shenanigans, and an unelected class of D.C. health bureaucrats wielding sweeping powers despite not being elected.

What Romney – whom Trump has affectionately referred to as a “stone-cold loser” and a “pompous a**” – didn’t bother mentioning is that we now live in a country where there is mass political censorship, only through the use of the “public-private partnership” with the current administration outsourcing its dirty work to Silicon Valley as an end-around the Constitution.

Romney also couldn’t be bothered to admit that he and his fellow travelers ignored the will of the people for four years after Trump sprung the upset on heavily favored Hillary Clinton by seeking to invalidate the 2016 election results with their claims of Russian interference or that the public servants in Congress have become multi-millionaires who have amassed great wealth after going to Washington, as have their cronies.

It is also important to point out that Mitt has frequently white knighted for President Joe Biden whose philosophy of governance including vaccine mandates draws heavily on authoritarian principles.

Carlson’s refusal to bow to pressure and his relentless pursuit of the truth has earned him the enduring hatred of the ruling establishment of which Mitt Romney is a part of and particularly galling was his trip across the pond to interview Orban, and for good reason.