This recent post was on the fact that the Sun’s EUV emissions had fallen to solar minimum-like levels well ahead of solar minimum. The implication was that the Solar Cycle 24/25 minimum was either going to be very deep and prolonged, or that Solar Cycle 24 would be very short, which in turn would be strange for a weak cycle.

The indicator of the EUV flux is the Lyman alpha index. To recap, this chart shows the index over the last three cycles, starting from solar minimum:

Figure 1 shows that Solar Cycle 24 has reached solar minimum-like levels three years ahead of minimum, if Solar Cycle was going to be 12 years long. What happens at solar minimum is that the proportion of EUV as part of Total Solar Irradiance falls. For the 23/24 minimum, the extent of the fall was a surprise, with the density of the thermosphere shrinking 30%. The following figure plots up the ratio of the F10.7 flux, less its activity floor at 64, and the Lyman alpha index, less a presumed average floor of activity of 3.5:

As Figure 1 showed, the departure of the Lyman alpha index to minimum-like levels seemed early. But just how early is it if everything else is normal? That is shown in the following graphic:

Figure 4 aligns the F10.7 Flux./Lyman alpha ratio on solar maximum for solar cycles 21 to 24 to two years beyond solar minimum, with the maxima being:

Based on the normal cycle tail from solar maximum, Solar Cycle 24 might have another three and a half years to go. So what is going to be: a monstrous minimum with a shrunken thermosphere and all the climatic effects associated with that, or a strangely short cycle?

The heliospheric current sheet tilt angle is 10° off the apparent floor of 3° but, based on the prior solar cycles, could still take a few years to get there. If Solar Cycle 24 does turn out to be short, then there is one person who predicted that: Ed Fix. Ed Fix, a retired B52 pilot in Ohio, sent me his planet-based solar model in 2009. He was inspired to created the model because the oscillation of the solar cycle reminded him of the ideal spring in mechanics. This is how the model plots up (red) and the historic sunspot record in green:

The model has the Solar Cycle 24/25 minimum in 2017. Solar Cycle 25 is predicted to be weak and short also. If events of the next year or so prove Ed Fix’s model to be correct, then it will be as significant as the results of any of the expeditions to observe solar phenomena over the last three centuries, but we get to watch in real time. 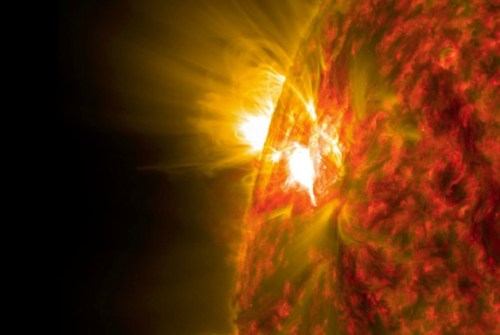