Demonstrators gather on the steps to the Texas State Capitol in Austin to speak against transgender-related bills being considered in the state legislature in May 2021.

According to a recent study from the Netherlands, the vast majority of transgender teenagers who underwent puberty suppression therapy went on to get gender-affirming therapy.

People who sought treatment for gender dysphoria at the gender identity clinic of Amsterdam UMC, a renowned medical facility in the Dutch city, were included in the study’s data, which was published in The Lancet. (Gender dysphoria is the term used to describe psychological pain brought on by a mismatch between a person’s assigned sex at birth and their gender identity.)

98% of people who had begun gender-affirming medical treatment in adolescence were still using these hormones at follow-up, according to research. The conclusion is noteworthy in light of continuing political discussions about whether or not young individuals should receive treatment that is gender affirming. Opponents of such policies contend that many transgender kids and teenagers will eventually discover that they aren’t actually trans.

People who began medical therapy in adolescence with puberty blockers before the age of 18 for a minimum of three months, followed by the addition of gender-affirming hormones, were included in the paper’s data. In order to check for a follow-up prescription for gender-affirming hormones, researchers then connected that data to a national prescription registry in the Netherlands. The study, which is believed to be the largest of its kind, adds new information to the contentious political argument over whether to recommend puberty-delaying medications or give transgender children gender-affirming medical therapy. Sometimes, when a young person is seeking treatment for a transition, they are informed that they are only going through “a phase” that they will outgrow.

The paper’s primary author is Marianne van der Loos, a doctor at Amsterdam UMC’s Center for Expertise on Gender Dysphoria.

“I think it’s an important finding because we see that most of these people continue to use gender-affirming hormones,” van der Loos tells NPR.

The argument over whether young people should have access to care that is gender affirming is mostly political. Guidelines for providing proper gender-affirming care have been published by significant medical organizations in the United States. “Pronouns are basically how we identify ourselves apart from our name. It’s how someone refers to you in conversation,” says Mary Emily O’Hara, a communications officer at GLAAD. “And when you’re speaking to people, it’s a really simple way to affirm their identity.”

For instance, the American Academy of Child and Adolescent Psychiatry has stated that it “supports the use of current evidence-based clinical care with minors.” It has also been demonstrated that preventing youths from receiving timely care increases their risk of developing suicidal thoughts and other detrimental mental health outcomes.

According to van der Loos, “There are just a lot of people having an opinion on this,” the topic of medical care for trans kids is a heated one not just in the United States but also in the Netherlands.

The 720 participants in the cohort research had a birth gender assignment of 31% male and 69% female. The population who sought gender-affirming treatment at this clinic can be seen in the presence of more people who were born with the gender assigned to women.

RELATED: Trans inmates need access to gender-affirming care. Often they have to sue to get it Transgender inmates who don’t get proper gender-affirming care in prison can experience serious anxiety, depression and suicidal ideation. One individual said the experience was “catastrophic.”

The researchers were unable to pinpoint the reason for the 2% of cohort participants who did not appear to continue receiving treatment with gender-affirming hormones.

“We aren’t sure that they really quit treatment. We couldn’t find a prescription for gender-affirming hormones for those people. So it seems that they don’t have one anymore in the Netherlands. And we can’t really tell from this data as to why they would have quit,” says van der Loos, adding that it’s an important question to answer in further research, along with the long-term effects of the treatment protocol on bone health. 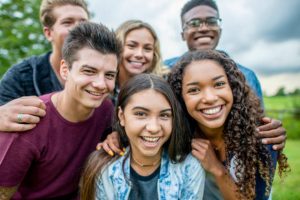 Among individuals treated at a gender identity clinic in The Netherlands, those who used puberty supressing treatment before the age of 18 and then started gender-affirming hormones, 98% (704 out of 720) continued use at follow-up, according to an observational study published in The Lancet Child & Adolescent Health journal.

Van der Loos stresses that a diagnostic assessment must be completed before a patient begins puberty suppression, and ongoing mental health care must be provided during the course of treatment at Amsterdam UMC. Van der Loos wasn’t shocked to learn that the majority of people who started treatment decided to keep it up.

“These were people that were supported by a mental health professional before start of treatment, [and] also after start of treatment. So based on that and our clinical experience, it’s not really surprising that so many people continue to treatment later on,” she says.

And, van der Loos notes, mental health support may not be a part of treatment everywhere.