The empirical, real world measurements and data shows no local and even less global warming.

All and every studies ignore convection when calculating the effect of CO2 – Convection alone falsify all studies when it comes to CO2.

More water vapor has the potential of leading more energy (heat) further north and south, something that can make both poles warmer.

But most importantly, more water vapor in the atmosphere means less water in the seas, i.e. falling sea level ..

All this means that CO2 is good for all and everything!

The chemistry and physics of carbon dioxide DOES NOT support the global warming theory, and NASA was aware of this way-back when the notion of wielding climate science as political weapon was but a twinkle in a young Al Gore’s eye.

In the early 1970s, the National Aeronautics and Space Administration had a strong and consistent theory regarding the trace gas that is carbon dioxide.

“The amount of atmospheric CO2 would have to increase 10 times to achieve a 2.5-degree rise in temperature,” scientists at the Goddard Institute for Space Studies were reported as saying in October, 1972.

“More CO2 wouldn’t raise the temperature any further because the gas would have reached its absorption limit,” the researchers added.

This “absorption limit” is one of the most critical points in the AGW myth.

Alarmists’ linear thinking tells them the more carbon dioxide you add to the atmosphere the hotter it will get — but this is a scientifically-baseless assumption, a li(n)e they’ve been fed by the dippy-eco-journalists (non-scientists) of the world who couldn’t recognize a nefarious controlling agenda if it kicked them up the arse.

A paper published in 1971 by NASA scientists Rasool and Schneider entitled “Atmospheric carbon dioxide and aerosols: Effects of large increases on global climate” explains why the alarmists’ assumption is fundamentally wrong.

Below is a key paragraph lifted directly from the study:

“From our calculations, a doubling of CO2 produces a tropospheric temperature change of 0.8-degree. However, as more CO2 is added to the atmosphere, the rate of temperature increase is proportionally less and less, and the increase levels off. Even for an increase in CO2 by a factor of 10, the temperature increase does not exceed 2.5-degree. Therefore, the runaway greenhouse effect does not occur because the 15-um CO2 band, which is the main source of absorption, “saturates,” and the addition of more CO2 does not substantially increase the infrared opacity of the atmosphere.”

Alarmists used to talk their way around this absorption spanner in the works by claiming that the remaining “unsubstantial” CO2-driven temperature increase would cause a chain reaction of other factors resulting in what amounted to runaway warming. However, the clock has long run out on that hokey theory — this prophesied chain reaction has been proven false by observation, and, therefore, it has largely been retired from the discussion.

To conclude, here is one key final point (and accompanying graph) from the Rasool and Schneider paper: “The rate of temperature increase diminishes with increasing CO2 in the atmosphere.” 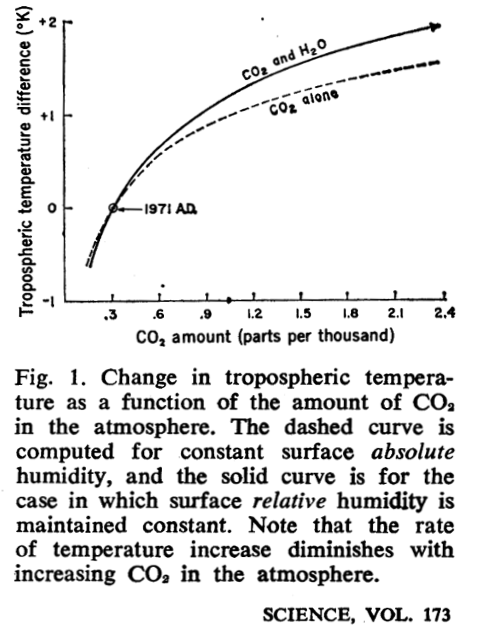 Ah, the early 1970s–before climate science was wielded as a political weapon.

The return of the COLD TIMES is ironically a far more likely eventuality, because it’s one based on actual scientific research (historically low solar activity, cloud-nucleating Cosmic Rays, and a meridional jet stream flow).

Even NASA themselves appear to agree, if you read between the lines, with their forecast for this upcoming solar cycle (25) revealing it will be “the weakest of the past 200 years,” with the agency correlating previous solar shutdowns to prolonged periods of global cooling here.