Scientists claim the discovery of what they consider to be the first fossil of a gibbon in southwest China has partially answered a long-standing question regarding the lineage of apes.

The fossil was discovered in China’s Yunnan province, and researchers estimate that it predates extant specimens by several million years. These discoveries were published in the Journal of Human Evolution.

The gibbon, a member of the hylobatid family of apes, is frequently referred to as the “lesser ape” in contrast to the larger “great apes” because of their lower stature.

Yuanmoupithecus xiaoyuan is the name given to the fossilized tiny ape discovered in China.

According to the researchers, the fossil shows that the gibbon was around the same size as modern-day gibbons and weighed about 13 pounds. They estimate that when it died, it was around 2 years old.

The finding sheds fresh insight on the debate over how apes evolved in evolutionary terms. 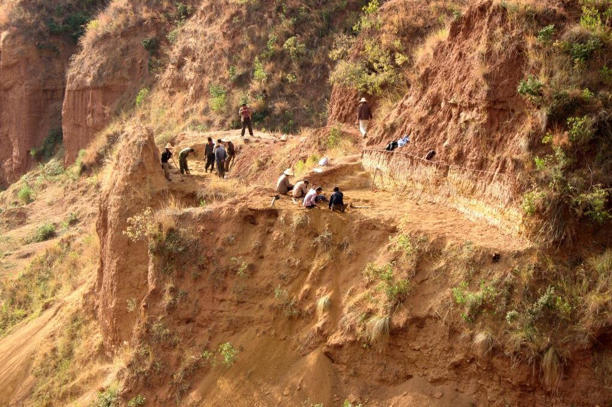 Scientists are seen during an excavation near the village of Leilao in Yunnan, China, which is one of the locations where Yuanmoupithecus remains have been found. Photo courtesy Terry Harrison/NYU Department of Anthropology© UPI

“”Genetic studies indicate that the hylobatids diverged from the lineage leading to the great apes and humans about 17 to 22 million years ago, so there is still a 10-million-year gap in the fossil record that needs to be filled,” Terry Harrison, one of the authors of the study, said in a statement.

It is hoped that new finds may help close these important gaps in the evolutionary history of hylobatids with further exploration of interesting fossil sites in China and other parts of Asia.

According to the study, there is no conclusive fossil evidence of the hylobatids’ evolutionary history before the Early Pleistocene. Given that hylobatids appear to have separated from other hominoids based on molecular evidence, the absence of a fossil record during deep time is puzzling.

Gibbons are said to be the swiftest non-flying, tree-dwelling mammals. The hylobatid family once consisted of a single genus, but there are currently four distinct genera and 20 species within it.

Hylobatid fossil remains are extremely rare; the majority of the specimens are isolated teeth and fragments of jaw bones discovered in caves in southern China and Southeast Asia that are no older than 2 million years old, continued Harrison.

This unexpected discovery helps us better understand the development of this family of apes and expands the fossil record of hylobatids back to 7 to 8 million years ago.