Nasa have said the appearance of a massive ‘ear-shaped crater’ on the surface of Mars could be a case of pareidolia, where humans see recognisable shapes in unfamiliar terrain

Nasa has revealed a giant crater on the surface of Mars — and it looks just like an ear.

The US space agency recently released the impressive snap taken from the hi-tech Mars Reconnaissance Orbiter probe, which has been orbiting the Red Planet since 2006.

It shows a crater measuring 1,800 metres (1.1 miles) across, and is located in Chryse Planitia in the Northern Hemisphere of Mars.

While the detailed black-and-white photographs of an impact crater will no have doubt been met with awe by a number of avid space watchers, many others have been drawn to its familiar shape.

With its uneven oblong shape and deep indentation to the left of the crater, a flood of commenters, including those from the research group, have likened it to a human ear. 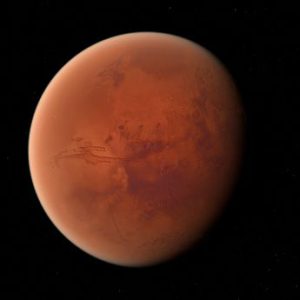 One team member even said “once you see it, it’s almost impossible to un-see” in a post, as they offered a possible psychological explanation for our instant recognition of its shape.

A NASA spokesperson commented: “Is it pareidolia, where we see features like faces and patterns where they do not really exist, if the shape really does resemble something?