This is quite interesting. Remember the claim in on the front cover of Nature in 2009 by Steig and Mann that Antarctica was warming, thanks to that “special Mannian PCA math sauce” that was applied to air temperature data to smear surface temperature trends over the entire continent? It was dashed by climate skeptics who wrote a paper. It was accepted for publication and disproved (in my opinion) by a team of credible skeptics that wrote a counter-paper. But, there’s an interesting twist thanks to new and surprising data; Steig and Mann may have captured surface air temperature trends in the exact same areas that have been identified as geothermal hot spots.

First the press release, from the British Antarctic Survey on Nov 13th, 2017:

An international team of scientists, led by British Antarctic Survey (BAS), has produced a new map showing how much heat from the Earth’s interior is reaching the base of the Antarctic Ice Sheet. The map is published this week (Monday 13 November) in the journal Geophysical Research Letters.

The team has produced the most up to date, accurate and high-resolution map of the so-called ‘geothermal heat flux’ at the base of the Antarctic Ice Sheet. Of the basic information that shapes and controls ice flow, the most poorly known about is this heat.

The most high resolution map of the geothermal heat beneath the Antarctic Ice Sheet Credit: BAS

“This new map of heat escaping from inside the Earth will help advance our understanding of the conditions at the base of the ice sheet, improving our ability to understand the past and to project future changes of the Antarctic Ice Sheet and its impact on global sea level”.

“It is incredibly difficult to take direct measurements of heat from the Earth’s interior beneath 3-4 km of ice in extremely cold and hostile conditions. That’s why we have used magnetic data to infer the heat and we’re pleased that what we have is 30-50% more accurate than previous studies.”

The Antarctic Ice Sheet contains the largest reservoirs of fresh water on our planet – around 70% of the world’s fresh water – and is currently losing ice, which contributes to rising sea levels. 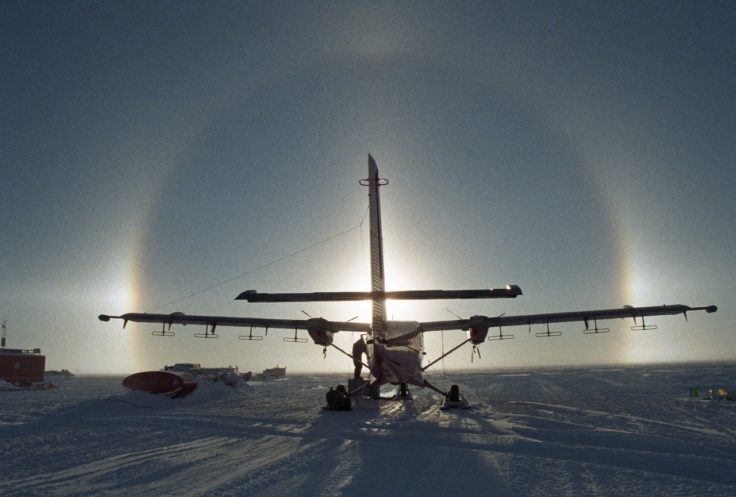 “If we are to predict with any certainty the future response of Antarctica in a warming world, scientists need to understand the role that heat from the Earth plays. What we know is that over time, the heat flow into the ice is quite constant and so the ice sheet adjusts to it.  The ice loss we’ve seen in recent decades is actually the result of changes in air and ocean temperatures. How the ice sheet will respond to these recent changes is influenced by the pattern of geothermal heat, and that’s why this new map is so important”.

Antarctica is the largest reservoir of ice on Earth. Understanding its ice sheet dynamics is crucial to unraveling past global climate change and making robust climatic and sea level predictions. Of the basic parameters that shape and control ice flow, the most poorly known is geothermal heat flux. Direct observations of heat flux are difficult to obtain in Antarctica, and until now continent-wide heat flux maps have only been derived from low-resolution satellite magnetic and seismological data. We present a high resolution heat flux map and associated uncertainty derived from spectral analysis of the most advanced continental compilation of airborne magnetic data. Small-scale spatial variability and features consistent with known geology are better reproduced than in previous models, between 36% and 50%. Our high-resolution heat-flux map and its uncertainty distribution provide an important new boundary condition to be used in studies on future subglacial hydrology, ice-sheet dynamics and sea-level change.

Now some recap of what claims were made about Steig et al. in 2009:

Steig stated in the New York Times in December 2009:

“We now see warming is taking place on all seven of the earth’s continents in accord with what models predict as a response to greenhouse gases.” Source: http://www.nytimes.com/2009/01/22/science/earth/22climate.html?ref=science

Drew T. Shindell of the NASA Goddard Institute for Space Studies in New York, co-author of the paper, said:

“It’s extremely difficult to think of any physical way that you could have increasing greenhouse gases not lead to warming at the Antarctic continent.”

Ummm, well it’s not all that hard to imagine if you think that the part of Antarctica with the most volcanic activity under the ice might also have the greatest amount of heat release. 91 such volcanoes have been discovered thus far:

Wikipedia has this to say about it follow on studies to Steig et al 2009:

In early 2013, David Bromwich, a professor of polar meteorology at Ohio State University, and a team including Antarctic weather station experts from the University of Wisconsin, published a paper in Nature Geoscience showing that the warming in central West Antarctica was unambiguous—and likely about twice the magnitude estimated by Steig et al. The key to Bromwich et al.’s work was the correction for errors in the temperature sensors used in various incarnations of the Byrd Station record (the only long record in this part of Antarctica); miscalibration had previously caused the magnitude of the 1990s warmth to be underestimated, and the magnitude of the 2000s to be overestimated. The revised Byrd Station record is in very good agreement with the borehole temperature data from nearby WAIS Divide.[24] A new statistical reconstruction[25] shows significant warming over all of West Antarctic in the annual mean, driven by significant warming over most of the region in winter and spring. Summer and fall trends, are insignificant except over the Antarctic Peninsula where they are widespread only in fall. These finding are in good agreement with the 2009 study in Nature, though in general the new results show greater warming in West Antarctica and less warming over East Antarctica as a whole.

Yes there’s warming in West Antarctica and the Peninsula, but is CO2 the cause? This new geothermal heat flux data and study from BAS throws ice water on that idea.

The new study from BAS uses over 50 years of magnetic measurements that were collected from thousands of hours flying over the continent. Warmer rocks lose their magnetic properties, and so the team was able to use the loss of magnetism in certain areas to calculate an estimate of the geothermal heat flux.

And gosh, side by side, these two maps look strikingly similar in the “hot spot” areas on the Antarctic Peninsula, and West Antarctica:

Steig and Mann, despite their failed attempt to use warming in one area of Antarctica to infer warming over the entire continent may have in fact captured an air temperature signature from that heat flux, which is completely unrelated to “climate change” or “global warming”.

I predict a new paper will correlate these two previously unconnected datasets, followed by much wailing and gnashing of teeth from climate scientists who will still insist the warming in Antarctica is a “robust” indicator of global warming.