Irony alert! The activist (Benjamin Santer) Ben Santer (known from ClimateGate) warned President Trump; “Don’t listen to the ‘ignorant voices’ on climate change”, then he publish this activist nonsense .. And on top of that in another of the ClimateGate infamous “science” journals, Nature . Related: ClimateGate continues – the Mann Hockeystick University of Arizona emails are now public

By Paul Homewood – Not A Lot Of People Know That,

“Humanity cannot afford to ignore such clear signals,” the U.S.-led team wrote in the journal Nature Climate Change of satellite measurements of rising temperatures over the past 40 years.

They said confidence that human activities were raising the heat at the Earth’s surface had reached a “five-sigma” level, a statistical gauge meaning there is only a one-in-a-million chance that the signal would appear if there was no warming.

Such a “gold standard” was applied in 2012, for instance, to confirm the discovery of the Higgs boson subatomic particle, a basic building block of the universe.

Benjamin Santer, lead author of Monday’s study at the Lawrence Livermore National Laboratory in California, said he hoped the findings would win over skeptics and spur action.

“The narrative out there that scientists don’t know the cause of climate change is wrong,” he told Reuters. “We do.”

Monday’s findings, by researchers in the United States, Canada and Scotland, said evidence for global warming reached the five sigma level by 2005 in two of three sets of satellite data widely used by researchers, and in 2016 in the third.

Professor John Christy, of the University of Alabama in Huntsville which runs the third set of data, said there were still many gaps in understanding climate change. His data show a slower pace of warming than the other two sets.

“You may see a certain fingerprint that indicates human influence, but that the actual intensity of the influence is minor (as our satellite data indicate),” he told Reuters.

The study has already been dismissed as pretty much irrelevant by Roy Spencer and John Christy of UAH, who maintain one of the satellite series used:

The new Santer et al. study merely shows that the satellite data have indeed detected warming (not saying how much) that the models can currently only explain with increasing CO2 (since they cannot yet reproduce natural climate variability on multi-decadal time scales).

In the end, I believe the study is an attempt to exaggerate the level of agreement between satellite (even UAH) and model warming trends, providing supposed “proof” that the warming is due to increasing CO2, even though natural sources of temperature change (temporary El Nino warming, volcanic cooling early in the record, and who knows what else) can be misinterpreted by their method as human-caused warming.

They haven’t shown what they say they showed. In particular they have not identified a unique anthropogenic fingerprint, or provided a credible control for natural variability over the sample period. Their claim to have attained a “gold standard” of proof are unwarranted, in part because statistical modelling can never do that, and in part because of the specific problems in their model.

In layman’s terms, it is no more than statistical jiggery pokery.

But, let’s look at the study at a more basic level.

In 2014, the same Benjamin Santer co-authored a paper called “Volcanic contribution to decadal changes in tropospheric temperature”. which attempted to compare satellite derived temperature trends with model projections. They looked at temperatures for the mid troposphere, which we label as TMT. (The new study also uses TMT).

This was what they found:

Despite continued growth in atmospheric levels of greenhouse gases, global mean surface and tropospheric temperatures have shown slower warming since 1998 than previously. Possible explanations for the slow-down include internal climate variability, external cooling influences and observational errors. Several recent modelling studies have examined the contribution of early twenty-first-century volcanic eruptions to the muted surface warming. Here we present a detailed analysis of the impact of recent volcanic forcing on tropospheric temperature, based on observations as well as climate model simulations. We identify statistically significant correlations between observations of stratospheric aerosol optical depth and satellite-based estimates of both tropospheric temperature and short-wave fluxes at the top of the atmosphere. We show that climate model simulations without the effects of early twenty-first-century volcanic eruptions overestimate the tropospheric warming observed since 1998. In two simulations with more realistic volcanic influences following the 1991 Pinatubo eruption, differences between simulated and observed tropospheric temperature trends over the period 1998 to 2012 are up to 15% smaller, with large uncertainties in the magnitude of the effect. To reduce these uncertainties, better observations of eruption-specific properties of volcanic aerosols are needed, as well as improved representation of these eruption-specific properties in climate model simulations.

They attempted to model actual trends, without the effect of ENSO and volcanoes: 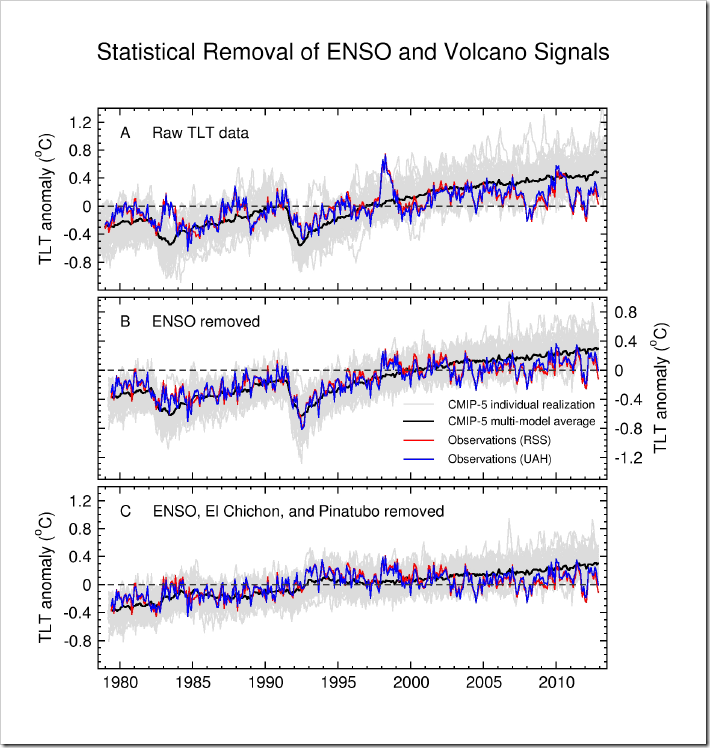 Once these were removed, it became clear that there has been little warming at all since the early 1990s. This was in stark contrast to the model projections.

Santer’s paper went on to consider other possible influences, without finding anything concrete.

Since 2014, little has changed in actual temperature trends, other than the record El Nino of 2015/16.

UAH anomalies for the mid troposphere are back to early 1990 levels, and of course 2014 levels as well. 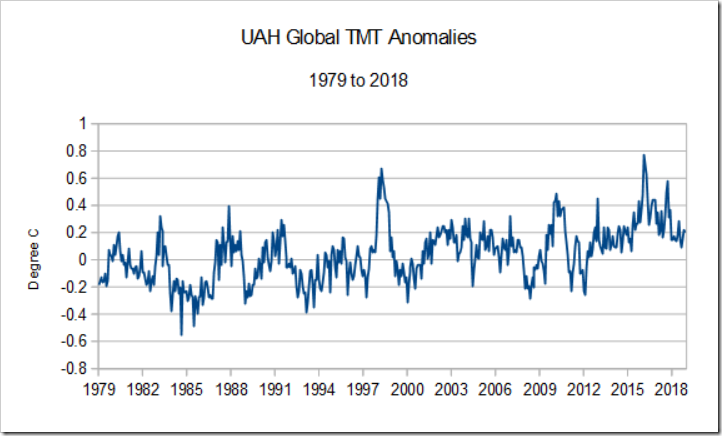 RSS of course have massively tampered with their dataset, to show a warming trend which was not there before.

But, significantly, the third dataset used in the new Santer study is STAR, which comes from NOAA itself. This shows a very similar trend to UAH, with gain current anomalies close to those in the 1990s. 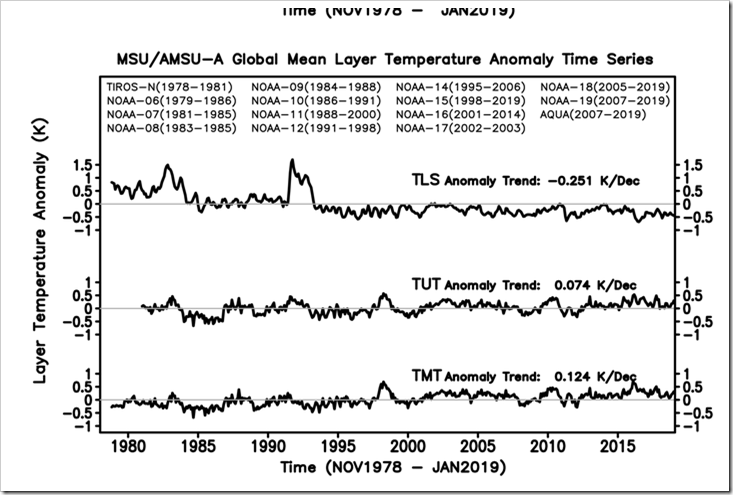 All that Santer et al have really found is what we already knew – that there was rise in temperatures between 1979 and 1998, but since then temperatures have effectively plateaued.

Climate models are still running way too hot, as Santer acknowledged in 2014. Far from proving man-made warming, as they now claim, they are still left with the same questions they raised in 2014.

But, according to HH Lamb, global temperatures plunged between the 1940s and 70s, (something which has steadily been adjusted out of existence on current datasets): 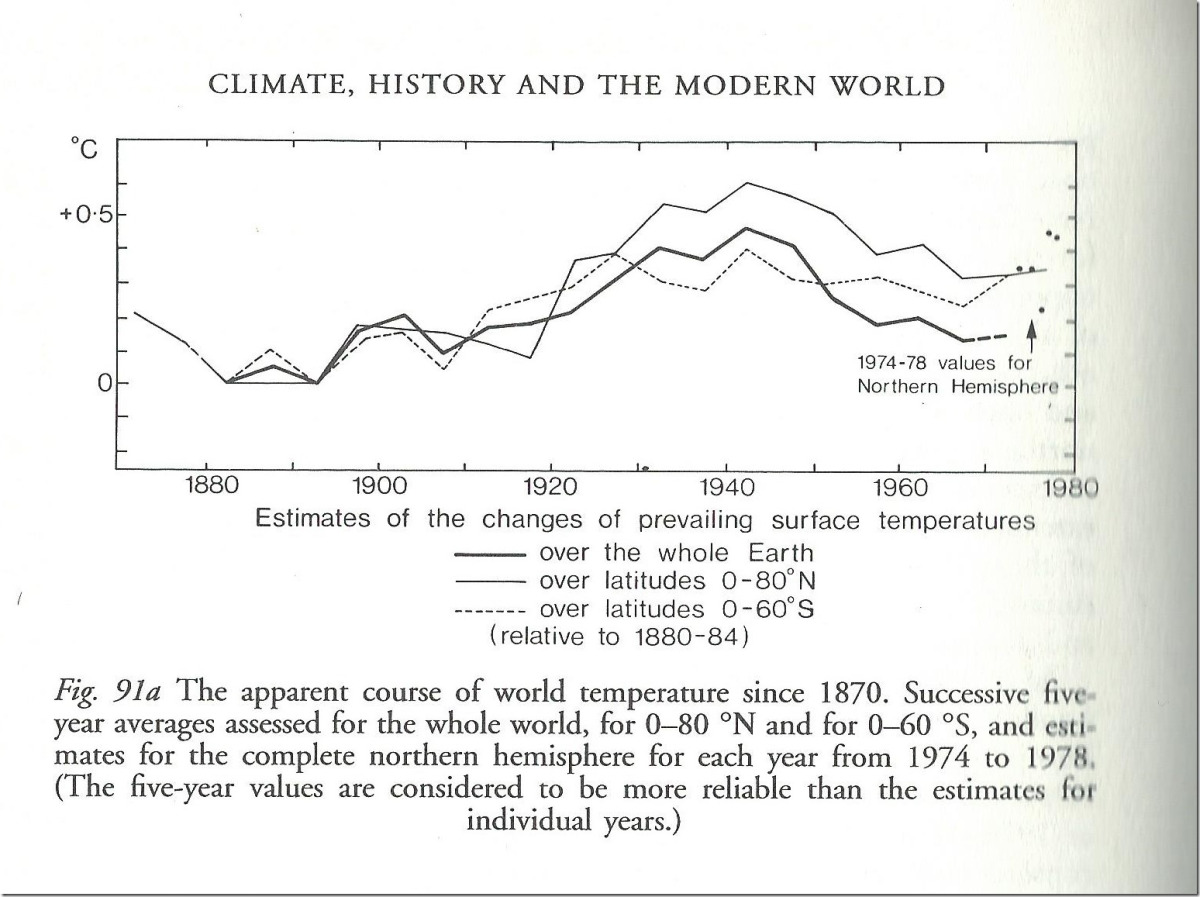 This global cooldown was indeed widely recognised at the time. If the cooling was due to natural factors, how much of the warming since 1979 has also been naturally caused?

Santer et al address none of these issues, and instead and their analysis is little more than a politically driven attempt to prove that the warming seen since 1979 is due to CO2.

Who would counterfeit temperature data if the measurements really did show a problem?