Climate models postulate that increasing CO2 concentrations will intensify the Earth’s water cycle. This intensification is believed to eventually result in dangerous (3°C and up) global warming. Observational evidence has thus far falsified these IPCC-endorsed claims.

According to climate models, water vapor and precipitation trends were supposed to have been enhanced as a consequence of rising anthropogenic CO2 emissions.

And yet after compiling decades of observational and evidence, it has been determined there has been no detectable global-scale human influence on the Earth’s hydrological cycle. 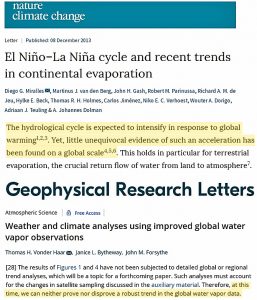 There have been many new scientific papers published that document the observed lack of any detectable global trends in the Earth’s hydrological cycle during the last century, or since anthropogenic CO2 emissions began rising dramatically.

Without water vapor-induced temperature amplification, the model-based consequence of doubling CO2 concentrations to 560 ppm (from the pre-industrial 280 ppm value) is a warming of just over 1°C.  This temperature change is neither dangerous or even concerning.

Simply put, the lack of supporting evidence for an anthropogenic intensification of the hydrological cycle effectively decimates a cornerstone of the dangerous anthropogenic global warming narrative.

“Little dispute surrounds the observed global temperature changes over the past decades. As a result, there is widespread agreement that a corresponding response in the global hydrologic cycle must exist. However, exactly how such a response manifests remains unsettled. Here we use a unique recently developed long-term satellite-based record to assess changes in precipitation across spatial scales. … Our results show opposing trends at different scales, highlighting the importance of spatial scale in trend analysis. Furthermore, while the increasing global temperature trend is apparent in observations, the same cannot be said for the global precipitation trend according to the high-resolution dataset, PERSIANN-CDR, used in this study.”

“Figure 2 shows the changes in precipitation volume over oceans and continents during the past 3 decades. As shown in Figs. 2b and 2c, fluctuations are present in the total amount of precipitation that has fallen over land and ocean; however, no significant long-term volumetric change is observed for either case.”

“The take-home message from our study using the new 33+ years [1983-2015]of high-resolution global precipitation dataset is that there seems not to be any detectable and significant positive trends in the amount of global precipitation due to the now well-established increasing global temperature. While there are regional trends, there is no evidence of increase in precipitation at the global scale in response to the observed global warrming.” 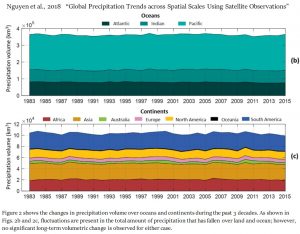 “[C]limate change results are highly model dependent so that even opposite climate change signals may be achieved from different types of climate models. This is mainly due to the fact that climate models with different resolutions and physics provide different representations of surface heterogeneities and mesoscale climatological structures. … We consider a climate change signal to be robust where at least 70% of the models agree on the direction of change. … In contrast to the projected increase in extreme precipitation, there is no robust change in precipitation totals on the global scale.”

“Here, we average four tree-ring width chronologies from the southeastern Tibetan Plateau (TP) over their common intervals and reconstruct the variability in regional relative humidity (RH) from the previous May to the current March over 1751–2005. In contrast to the summer drying associated with centennial-scale warming and the weakening of the Asian summer monsoon, our RH [relative humidity] reconstruction shows no significant centennial trend from the 1820s through the 2000s.”