You may remember about six months ago, just before Christmas of 2020, I stated that I was to conduct another experiment comparing a flat plate, with a greenhouse on a flat plate. Well when doing that I stumbled on a whole heap of different problems and it has taken me this long to get over them all.

Ranging from literally exploding greenhouses, leaking wire-ways, bubbling compressors and melting glue on the brackets. It was like the Gods were against me, if it could go wrong it did. And I did all this at the same time as moving into and renovating a new home I have moved into. Anyhow I have now actually managed to perform two very straightforward comparisons.

The comparisons being the difference in maximum temperature of a flat plate, in a vacuum chamber compared with the same flat plate with a mini-greenhouse on it. (I have had to substitute an empty, label less upside-down large Coffee Jar for the greenhouse as the ones I made all exploded when I drilled holes in them. As did several glass jars.) This comparison being made to see if the one with the glass greenhouse on it, is cooler or warmer than the flat plate on its own.

If RGHE fake theory was to be believed, the back radiance from the greenhouse would make the plate warmer than if it was on its own. And yet again, low and behold, my predictions came true, it wasn’t. What happened was it was cooler, as you can see from the results below. In both experiment, warming was conducted for 1 hour, followed by cooling for 30 minutes then warming again.

(Although for experiment 2 with the jar, I conducted it for 1 hour 10 minutes to give extra chance, of back radiant warming, didn’t occur.) I repeated this 3 times.

Each experiment was conducted with the plate in the same location as the brackets are super-heat resistant glued to the inside of the Vacuum Chamber. The heating element is a 100 Watt

Reflective bulb with additional reflection by wrapping it in aluminium foil. 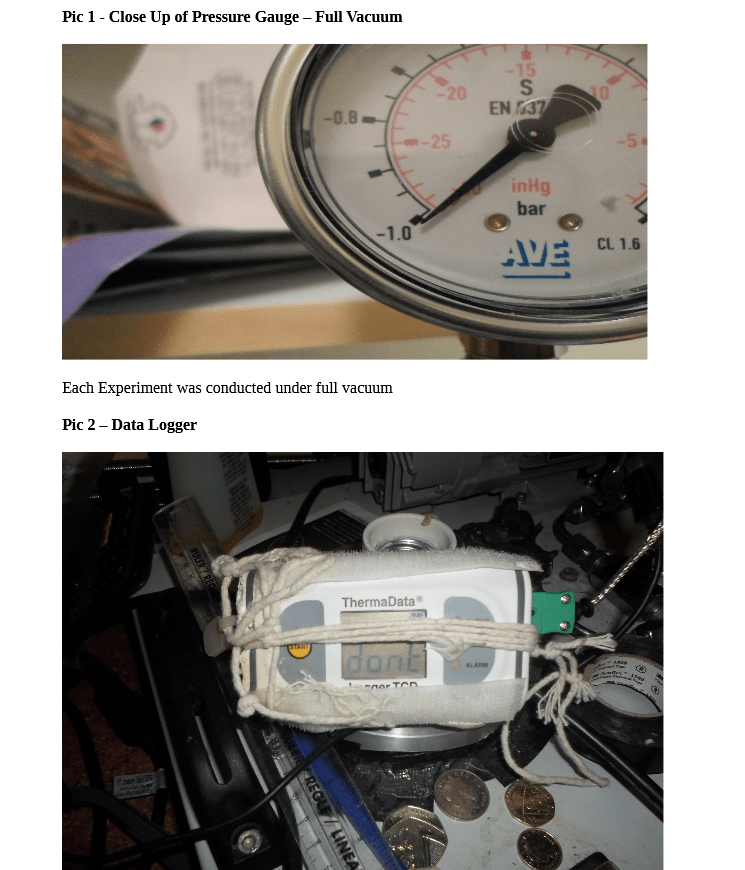 Each experiment had the temperature probe data recorded using this data logger. (The string is there from when I strapped it to a bracket inside the chamber. Not enough space to do it that way on this occasion so I had to wire through the lid and place the data logger externally.) 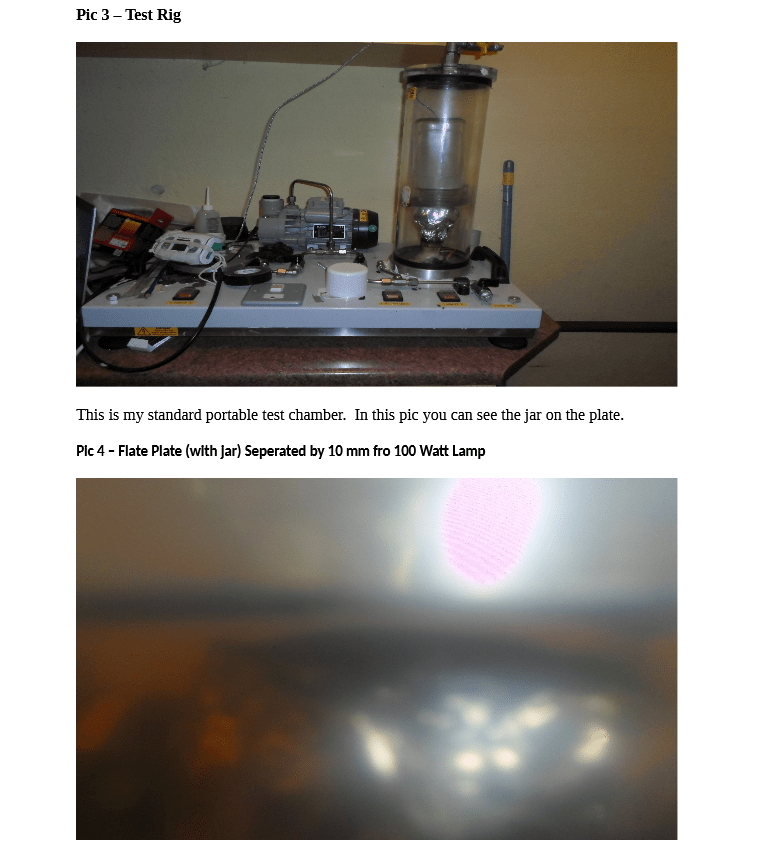 There was no change in distance on any tests as the plate is on glued internal brackets. Experiment 1 – Black Flat Plate. The picture of the flat plate test is below with the results tabulated. 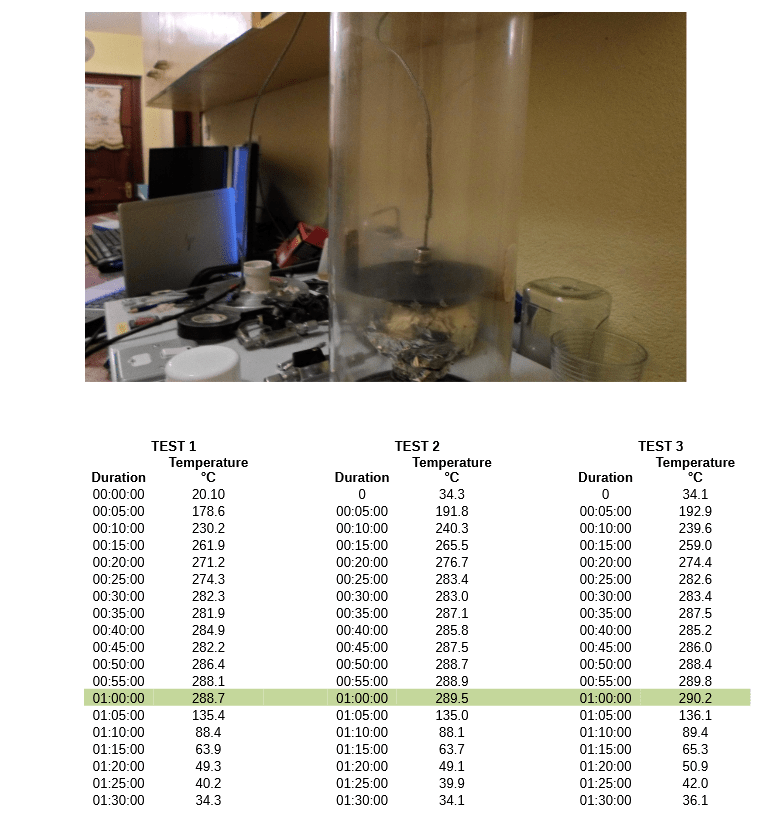 We can see from the above results that starting at 20°C after 1 hour maximum temperature of 288.7 is achieved in the first test. With 30 minutes of cooling it drops down to 34.3, then warming back up to 289.5 as a maximum and on 3rd and final test it rises up to 290.2°C. The warming and cooling pattern of each test is virtually identical. 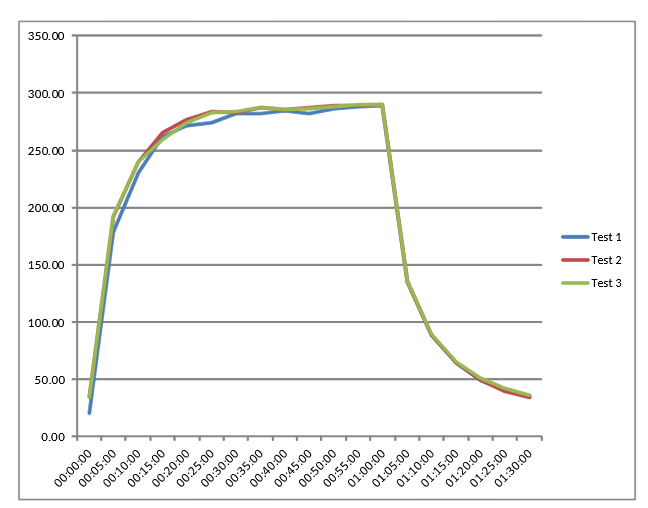 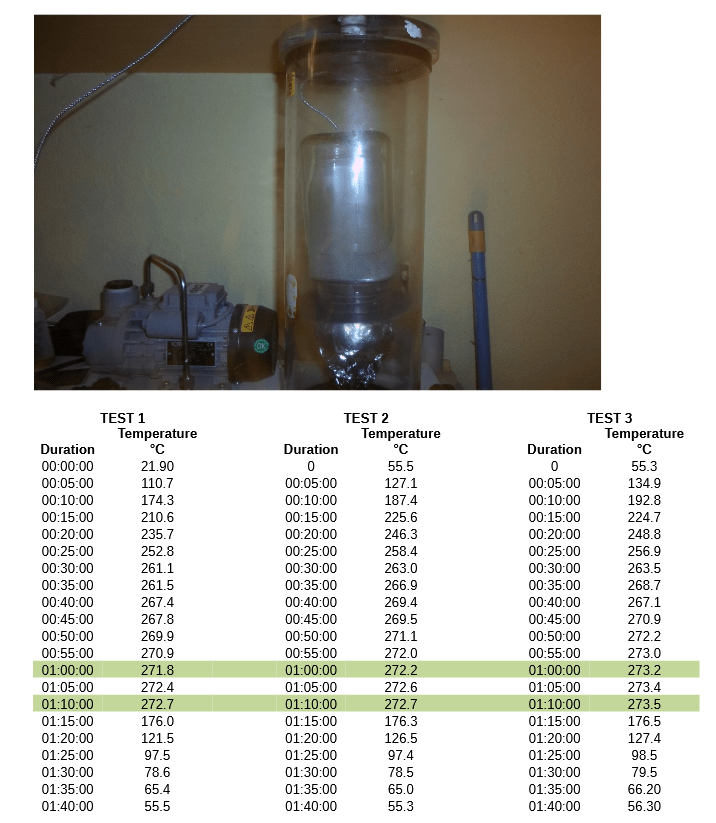 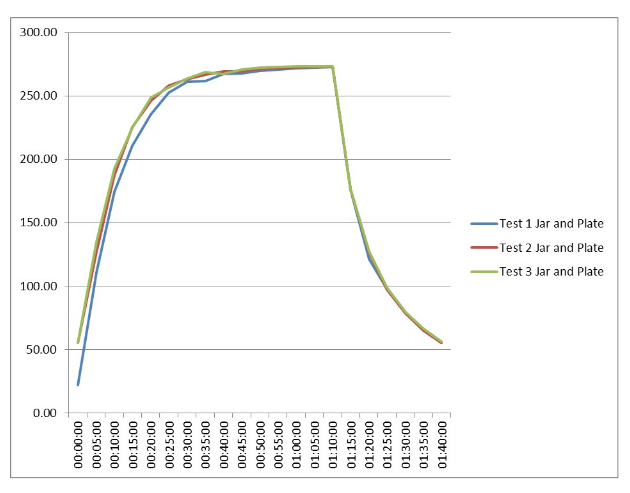 So I gave it more time and it doesn’t happen. If I leave it all day, IT DOES NOT HAPPEN.

You can see the maximum temperature reached float around 272 to 273 degrees. Much less than the 290+ with the plate on its own. The extra mass from the glass jar, meant it didn’t cool down quite as fast, but that was of no-consequence to maximum temperature attained on re-heating after 30 minutes of cooling.

The emission is now that of the plate and the jar, therefore only cooler maximum conditions can exist. The plate is cooler WITH the jar in a full vacuum than it is WITH OUT IT.

Radiation greenhouse effect is a lie.

Greenhouses are only warmer in real conditions because of “RESTRICTED CONVECTIVE CURRENTS” nothing else.

This test proves that convincingly and this test can be repeated and conducted anywhere. I can repeat this at will. I can drop a you-tube video of a repeat of this any day I like and I will do so at some point of my own convenience. Radiation Greenhouse Effect is a lie, as is climate crisis, global warming is a non-sense, all CO2 taxes are a scam.

Someone tells you otherwise, you know they are lying. All the tall tail teachers tell of Climate Crisis is just that, “a fairy tale” (or “fairy-mare” as this magical effect is going to supposedly be the doom of us all) nothing else. Pure fantasy.

This experiment, can and will be improved upon, but there is no getting away from the foundation of truth that this experiment demonstrates. We are all being lied to about RGHE,

The climate crisis IS A SCAM!

COP26 heading for the rocks?

Global fossil fuel use similar to decade ago in energy mix