King Harald of Norway has been hospitalised with a fever, the country’s royal household said in a statement this afternoon.

The monarch and three-time Olympian, 85, is in a stable condition at Oslo University Hospital Rikshospitalet, it added.

He underwent a leg operation in January and tested positive for Covid in March, with his son, Crown Prince Haakon, briefly assuming the responsibilities of the monarch.

A second cousin of Queen Elizabeth, Harald is 78th in line to the British throne. 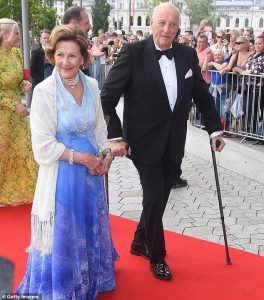 They are linked by great-grandparents King Edward VII, who reigned from 1901 to 1910, and Queen Alexandra of Denmark.

Edward was Queen Victoria and Prince Albert’s eldest son, with Queen Alexandra his wife of 47 years.

When Norway became independent in 1905, it asked Danish monarch Prince Carl to be king. That brought the two families together and extended Victoria and Albert’s descendants into another country’s royal family.

Harald sailed with a crew of six others in a Swiss sailing event just last week on family boat Sira, built by his Olympic gold medalist father in the 1930s.

The monarch participated in the 1964, 1968 and 1972 Olympics, representing Norway in yachting events. He never medalled.

Harald underwent a leg operation in January, a month before his 85th birthday, but insisted on taking part in the Sailing World Cup.